Why maximum length of IP, TCP, UDP packet is not suit?

From many tutorials, I get follow knowledge(maybe I'm misunderstood) :

But when I made a test and watch Wireshark, I get a different answer.

This is my Java code (it's not necessary to understand this.), I try to send 110k bytes data with a TCP connection. This is my Wireshark. 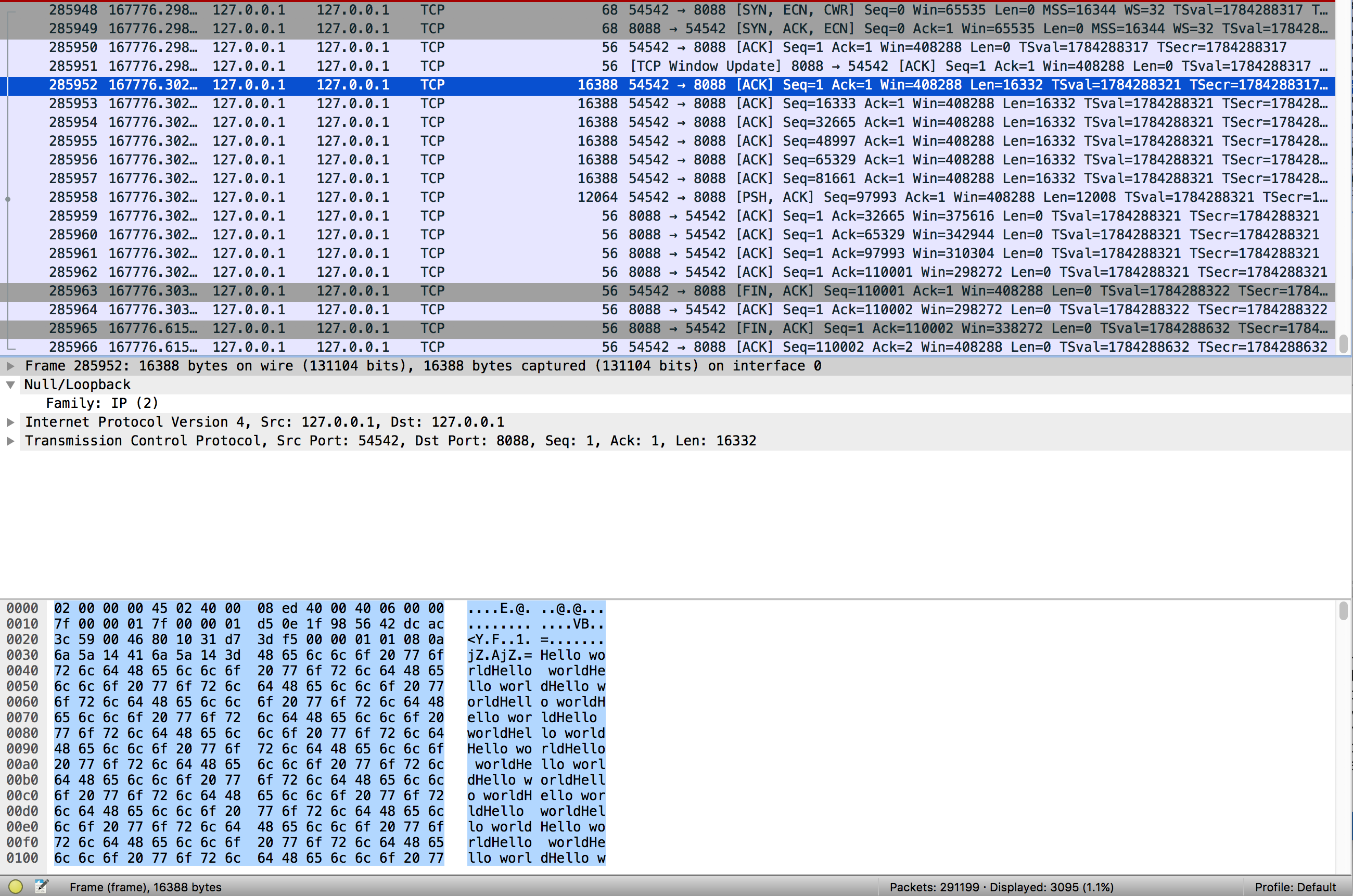 My 110k bytes message is split to 7 packets, I think this shows that maximum length of a TCP packet is 16388 bytes.

the result ismessage length is 65507.

I was really confused:

Then I have read many post on SOF or other websites, But I don't get an answer, I think is not duplicate to others.

IP protocol build on Ethernet or something, Why an IP packet can be 65535 bytes when Ethernet can only send 1500 bytes?

The 65535 bytes limit in IP is because the length field in the IP header is only 16 bit.

The applications sends data to the OS kernel which then packetizes the data. The size of the data which can be send to the kernel at once depend on the size of the socket buffer which results in the packet size you see. Additionally the kernel might further split the data to best fit the maximum size of the underlying physical layer (like ethernet). With TCP the kernel might also decide to join small data so that they get transmitted together.

Note that for TCP the packet length on the wire is actually irrelevant for the application since TCP is a continuous data stream. With UDP this would be different, i.e. every send would result in a single IP message and would also be received as such single message by the recipient.

Different data-link protocols were designed by different people at different times, and they each have their own MTU (maximum payload size). Ethernet was a college thesis for Bob Metcalfe, and it was designed with a 1500 octet MTU. This was about the time (1970s) that the predecessor for IP was being created by Vint Cerf. I seriously doubt either even knew the other or what the other was working on, and it is certain that neither knew that the other would become dominant, even after they were made products (ethernet in 1980 and IPv4 in 1981). Other people and other companies developed other data-link protocols, each with a different MTU specified by the protocol designer.

A transport protocol, such as UDP or TCP is the payload of the network protocol. UDP has a datagram header size of 8 octets, and TCP has a segment header of at least 20 octets.

The network protocol and transport protocol headers must be subtracted from the data-link protocol MTU to arrive at the maximum amount of application data that can be transported inside a data-link frame. That would include any application-layer protocol, e.g. HTTP.

I guess the part that you are missing is that network protocols were basically all developed independently, by different people, with different ideas, at different times. What we use today are the protocols that became dominant over the years, for one reason or another. Many of these protocols have nothing to do with each other. For example, ethernet can carry any number of network protocols (IPv4, IPX, AppleTalk, IPv6, etc., ethernet was primarily used for IPX for years, which has nothing to do with IP), and neither IP version (IPv4 and IPv6) cares which data-link protocol (ethernet, Wi-Fi, ARCNET, token ring, FDDI, frame relay, HDLC, PPP, ATM, etc.) carries it.

Not the answer you're looking for? Browse other questions tagged ip ethernet tcp udp mtu or ask your own question.

8
How is IEEE 802.1ad (aka VLAN Tagging, QinQ) valid, when the packets are too large?
2
1522-byte frames from access point being dropped by gateway
2
OSI model encapsulation
1
TCP segment length and TCP/IP header options
5
How does a TCP segment fit into a smaller IP packet?
0
Is it possible to re-transmit only the last packet at TCP flow?
20
Why is Packet Size Limited?
1
How is 65535 bytes is total length of IP datagram?