I was wondering if it's possible to connect a physical Raspberry to a NUC running several virtual machines on an ESXi environment.

The network is setup as follows: 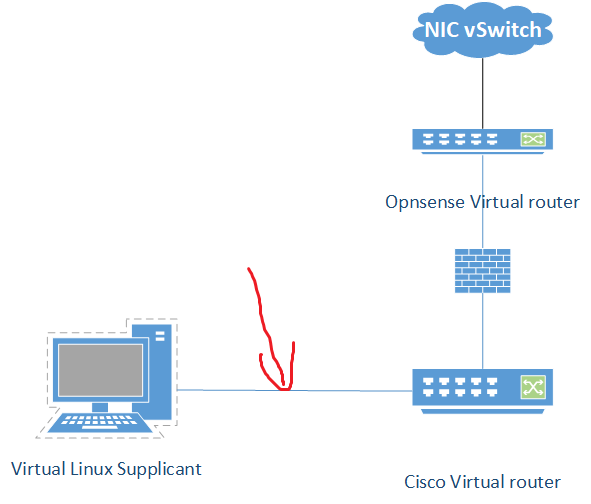 I want my physical device to be 'connected' at the red arrow. Is it possible?

I have found a way to enable my virtual router to act as router for the physical device, solving my problem.

EDIT: As Teun Vink has a valid point I'll try to explain my solution.

After doing this I have connected a physical switch to the internet port of the ESXi NUC. Since the virtual Cisco router is able to send DHCP requests (and do the routing stuff) over the vSwitch0 (promniscious mode) and my physical raspberry can be connected to the physical switch, they are now able to communicate.

Any physical or virtual device connected to either vSwitch0 or the physical switch will receive routing and ip addresses from the virtual cisco router. They are in the same subnet, which allows them to communicate. None of them, however, have an internet conenction (which, again, does not matter in my case)

Note that the cisco router is also virtual, but just not in picture

Not the answer you're looking for? Browse other questions tagged cisco routing virtual or ask your own question.

2
Connecting to network device from inside and outside network
3
Virtual Bridges do not seem to be carrying LLDP information
1
Are there any Virtual Switch concepts besides vLAN, Virtual Switch, Virtual Distributed Switch, and Logical Switch?
2
Virtual Appliance - Cisco Router
0
If physical switches are necessary in a SDN