How is Ethernet traffic sent between computers with multiple switches in-between? [duplicate]

I've wondered how Ethernet packets sent from Laptop-A to Laptop-B on the local network segment are delivered, when multiple switches are in-between.

For hubs, that just replicates the packet on all outgoing network ports, the packet sent from Laptop-A will eventually reach Laptop-B. The same holds for ARP requests (broadcast), when multiple switches are in-between.

However, switches only send packets on a single outgoing network port, depending on the destination MAC address and its CAM table. But, Switch-A's CAM table only knows about devices connected directly to it, so it doesn't know anything about Laptop-B?

So, how does Switch-A know where to send traffic destined for the MAC address of Laptop-B? 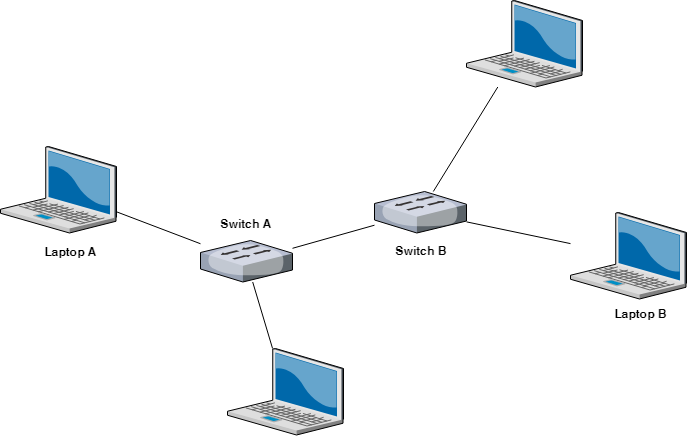 So, how does Switch-A know where to send traffic destined for the MAC address of Laptop-B?

By doing what a switch does: Unknown Unicast Flooding. It sends out the given frame with Laptop-B's Dst MAC address out of all ports (except the port the frame was received on), including the inter switch link to Switch-B.

Assuming that Switch-B already knows where Laptop-B is connected (if not: see "unknown unicast flooding" above), it will send out the frame via Laptop-B's switchport. The reply frame from Laptop-B probably won't have to be unknown-unicast-flooded, because the given MAC address of the requesting system was already learned when the frame (which was unknown-unicast-flooded by Switch-A) entered Switch-B via the inter switch link, so there's going to be a MAC address table entry for it.

It is perfectly normal for a switch to have multiple entries in the MAC address table for a single switchport [1].

So eventually, over time [2], Switch-A will have a MAC-Address table with all -A systems on their own ports, and all -B systems on the inter switch link port (and vice-versa for Switch-B)

[2] 300 seconds commonly is the default lifetime for entries in the MAC address table. Unless configured otherwise.

But, Switch-A's CAM table only knows about devices connected directly to it, so it doesn't know anything about Laptop-B?

This is generally wrong.

Switches can and do keep track of many MAC addresses behind a single port.

As said in Marc's answer if a switch gets a unicast frame with an unknown destination it will flood it to all interfaces (except the one it was received on).

But in practice this rarely happens unless a switch is overloaded or rebooted. In practice if node A wants to communicate with node B it will start out by broadcasting* a discovery packet, this will tell every switch on the network how to send traffic to A. B will then send a reply (may be unicast, multicast or broadcast depending on the protocol) to that discovery packet which will inform at least all the switches along the path from B to A about the location of B.

* For ipv6 the packet is technically multicast but that doesn't effect the switch side of things.

Not the answer you're looking for? Browse other questions tagged switch mac-address or ask your own question.

5
Does a switch MAC address table sync across all switches in the same VLAN?

3
HSRP causing switch CAM entries to expire
1
VLAN Traffic being sent to many ports
1
General network comprehension
3
Do typical Ethernet switches have timeout for MAC table entries?
18
Why is the CAM table in a switch called CAM table and not MAC table even though it holds MAC addresses?
0
ARP behaviors between hosts connected via switches
1
How does the swtich know if a packet needs layer 2 switching or layer 3 routing?
2
How do computers send switches packets, if switches don't have IP or MAC addresses?
0
Do unicast frames get sent to all switches associated with the target VLAN?