Confused about the results from the cable tester

A little bit of backstory, just in case you want some context. In the last couple of weeks the network at least internally has slowed down. As far as I can tell the only things that have changed has been new emergency lighting has been installed and some servers have been moved from a different subnet.

Anyway onto the problem / question.

We have a NaviTEK-NT tester and below is an image of one of the network ports results. I have been told the ports should be Cat5e as that is what was requested when the points got installed.What exactly is happening in the image below? As Far as I can tell it's got 2 pairs going 20M, which is about the length of the cable between the network point I use and the patch cabinet. I then have 2 pairs going around 1M, which is maybe the rough length of the Ethernet cables combined (about 0.3/0.4m * 2).

In my head this indicates that maybe their is a break or something as I'd expect 4 pairs of 20M ~ cable length. However as far as the manual is concerned I would see a red line cutting the cable if there was a break.

TLDR: In the image below why are 2 pairs 20m and the other 2 are 1m in length. What does this indicate? It should be patched up as Cat5e though I wouldn't rule out it being just a cat5.

If I have missed anything let me know and I will try and find out anything else that could help. Thank you very much. 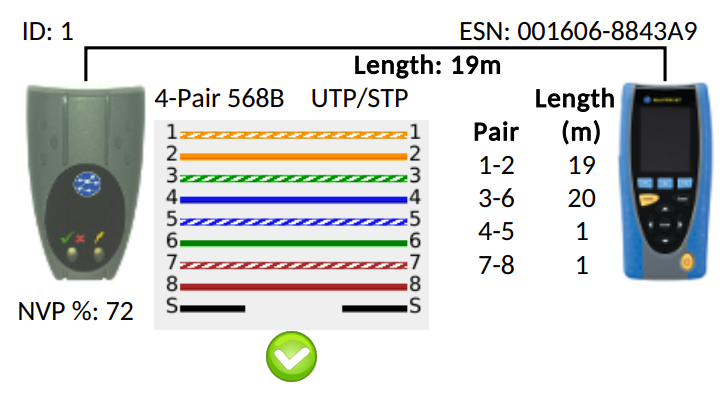 I offer another interpretation: 4 wire cable for 100Mbit/s.

This is basically the same as zac67's answer "Either it's a bad LSA contact, a bad panel insert or a damaged cable.", but probably the situation is intentional, not accidental.

It is compelling that it's exactly pairs 1/2 and 3/6 that are 20m long, while the other pairs are just shown with the length of the patch cable used to connect the tester to the cable.

The cable tester's graphical result is somewhat puzzling. It does show "S" (shielding) as a interrupted link, but the presentation of wire pairs 4&5 and 7&8 is shown as single strech of 1m cable.

If wire pairs 4&5 and 7&8 were discontiguous, i.e. present in the 1m patch cords, but "absent" (probably: "used elsewhere") in the ~20m of fixed-installation cable, they should be shown the same way as the shielding link: with a gap.

Then again, this might be a misinterpretation by the cable tester.

There were days when installed 8-wire cable was used to provide two 8P8C connectors (a.k.a. "RJ45"), but equipped with just 4 wires each (1,2,3,6), to "save some money", and of course because 100Mbit/s Ethernet was a big thing back then and because it ran fine on just two twisted pairs.

Saving money that way has a veeeeery long tail, as we now see. And then there were "Cat5" labelled patch cords too, with just two pairs inside. m-(

You may want to check if you happen to have found one of these old tripwires (pun intended).

A cable tester of that type injects a pulse into the cable and analyzes the time it takes to reflect back. That tester can't really test/certify a cable deployment (you'd need attenuation, NEXT/FEXT, ...) but it does show a problem - the short lengths you've got indicate a "bump" in the cable that reflects enough energy to trigger the analyzer.

Most likely, the bump is caused by bad termination. Either it's a bad LSA contact, a bad panel insert or a damaged cable. An impedance change is also possible but that would reflect on all pairs. Another cause could be a split pair - double-check the color codes on the panel contacts.

Even with Cat-5e cabling (which isn't as delicate as Cat-6A by far) you need to have a deployment certified so you know you can rely on each connection.

Not the answer you're looking for? Browse other questions tagged network cabling speed testing or ask your own question.

8
The maximum length of CAT6 for intranet network?
0
Multiple virtual UTP cables over one physical?

4
Why is the 100base-TX maximum distance unchanged from the original specification on better cable?
1
Fiber Cable speed tester
1
Connecting two switches together over longer distance fails
1
Can bad cabling affect the overall network?
1
What can I infer about a network connection using a cable tester (if anything)
2
PoE-safe Cable Tester
0
But confused about SSL VPN and IPsec Site -Site VPN
0
What does "inline" mean in the context of cable testing?
0
Is there a network cable tester device that tests the cables with realistic frequency instead of on/off leds?