Is correct to say that the value inserted in the variance command, lets say the value of "2" on a route that has a cost of, lets say "100", will unequally load balance all routes up to a cost of 200 ?

Is correct to say that the value inserted in the variance command, lets say the value of "2" on a route that has a cost of, lets say "100", will unequally load balance all routes up to a cost of 200 ?

In other words, a path must have a feasible successor in order for EIGRP to consider sending traffic over that path. See the portion I have highlighted in the document below.

How Does Unequal Cost Path Load Balancing (Variance) Work in IGRP and EIGRP? 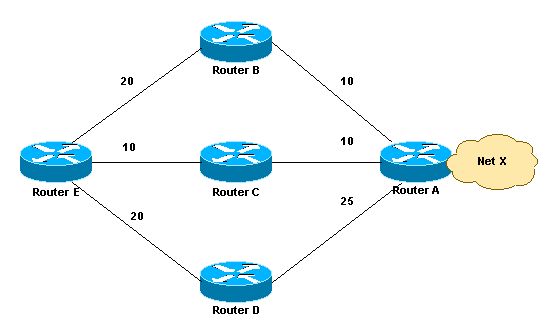 This section provides an example. In the network diagram, there are three ways to get to Network X:

Router E chooses the path E-C-A with a metric of 20 because 20 is better than 30 and 45. In order to instruct EIGRP to select the path E-B-A as well, configure variance with a multiplier of 2:

This configuration increases the minimum metric to 40 (2 * 20 = 40). EIGRP includes all routes that have a metric of less than or equal to 40 and satisfy the feasibility condition. In the configuration in this section, EIGRP now uses two paths to get to Network X, E-C-A and E-B-A, because both paths have a metric of under 40. EIGRP does not use path E-D-A because that path has a metric of 45, which is not less than the value of the minimum metric of 40, because of the variance configuration. Also, the reported distance of neighbor D is 25, which is greater than the feasible distance (FD) of 20 through C. This means that, even if variance is set to 3, the E-D-A path is not selected for load balancing because Router D is not a feasible successor.

The variance command inserted in EIGRP used to adjust metric for EIGRP accordinglly.