Do VLANs within a subnet need to have their own subnet for router on a stick?

I have been creating a network lab in packet tracer for practice. I have 3 vlans in subnet A and I am trying to configure router on a stick at gig6/0 on the bottom left of the image. Do I need to create a subnet for each VLAN in order for the router on a stick gateway to work? 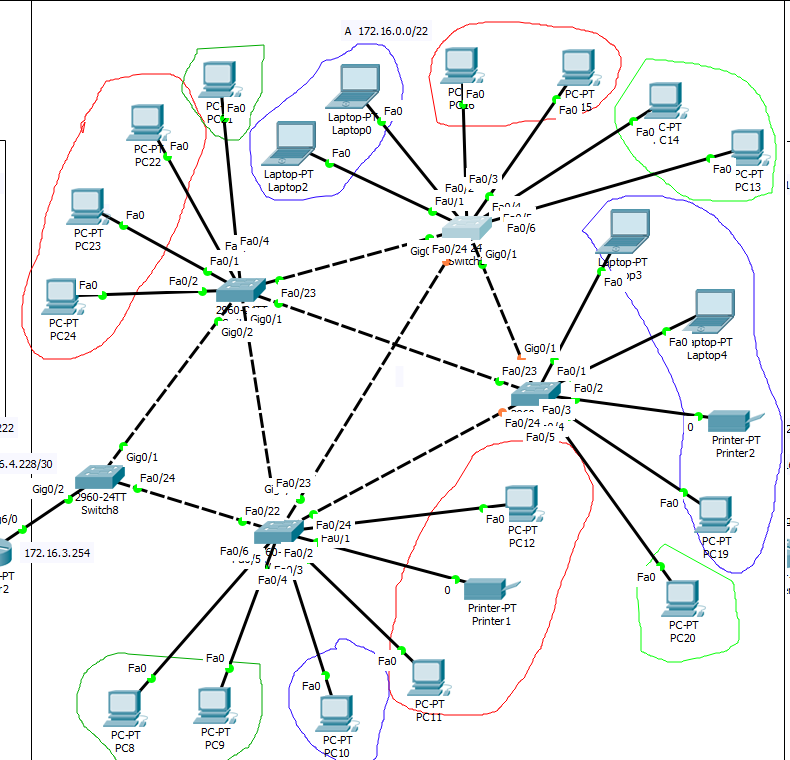 I'm not understanding your exact problem because you don't provide enough detail but maybe this helps:

With rare exceptions, an IP subnet is mapped to a VLAN = broadcast domain = layer-2 network on a 1:1 basis.

You can run multiple IP subnets inside a single VLAN but they need a router to communicate with each other. Most often this setup doesn't make too much sense.

You can't run a single IP subnet across multiple VLANs though (without elaborate workarounds). Nodes in the same subnet expect to be able to talk to each other on a common layer-2 network = VLAN = broadcast domain.

So, your "VLANs within a subnet" can only work when you've split that subnet into sub-subnets properly and set up the router as gateway in between. A router on a stick is a router forwarding between VLAN subinterfaces on a single physical interface. Each subinterface needs to connect to one of the desired VLANs, so the link needs to be a VLAN trunk on both the switch and the router side.

Just to amplify on Zac’s answer: you have one subnet per vlan and vice versa. At the CCNA level, you can ignore the rare exceptions. The router on a stick has an (sub)interface in each subnet. Therefore all VLANs must be trunked to the router.

In practice, it is always a good idea to have VLAN with its own subnet. However, you can split a subnet into multiple VLANs since it is only a test topology and you don't have to worry about the IP address management challenges.

Not the answer you're looking for? Browse other questions tagged router vlan subnet trunk gateway or ask your own question.

2
Best Practice(?): 2 publicly available subnet VLANs and inter VLAN routing
4
I have two vlans on the same router that can't ping each other
4
Multiple VLANs under one subnet (for traffic control)
2
Unable to route multicast from IPcam (four vlans, one switch, one router with router-on-a-stick)
1
How to turn off auto-routing between interfaces in same router ? is there any command for that?
2
Router on a stick not connecting 2 different VLANs
0
Cisco router on a stick with public ip wan (ISP)gateway
0
Configuring routers in Packet Tracer - Simpler configuration