In the diagram below, I'd like to carve out a /28 network from 192.168.0.0/24 and move it to another geographical location and still maintain access in and out of the original /24 network. 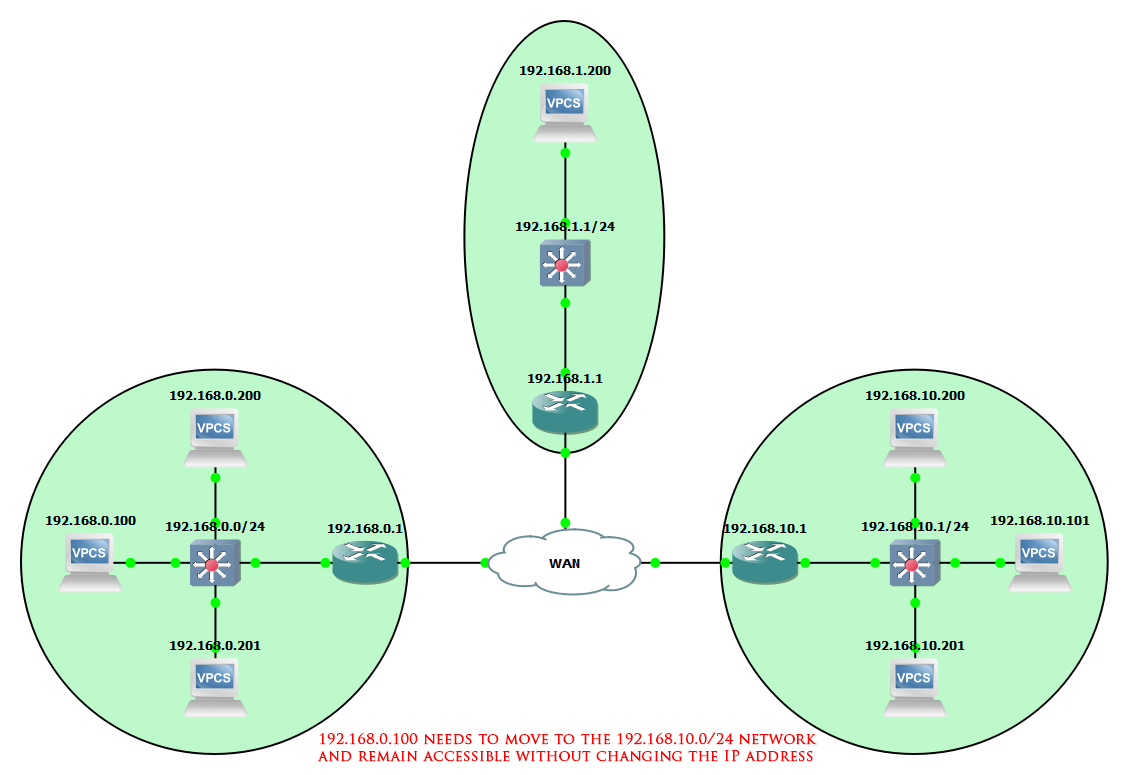 routing subnet design
Share
Improve this question
edited May 31 '19 at 14:29

Yes it can be acomplished.

Most of the setup will be the same as for any other new network. You would add the new network as a second network on the router interface facing the 192.168.10.0 network, then make sure all your routers have routes to it (either by static routes or by some routing protocol). Routers use a longest prefix match, so routers with a route to the new network will route packets to it in preference to the old one.

However there is one detail that needs to be attended to. When hosts on the old 192.168.0.0/24 network try to send packets to hosts on 192.168.0.96/28 they will by default arp for the destination address rather than the gateway address. In a default configuration this will result in a failure to deliver the packets.

To resolve this we have two options.

If you try to use part of a network somewhere else as you have described, hosts on the original network cannot access the part you have moved. The way a host uses a gateway (router) is that all packets are encapsulated frames and delivered on the local network. A host will mask the destination address on a packet with its mask and compare that to its own masked address to see if they are on the same network. If they are, it will use ARP to get the destination MAC address, but the host on the remote network will never respond, so the packet will be dropped. If the destination IP address is on a different network, the host will use ARP to get the gateway address and encapsulate the packet in a frame destined for its gateway. The router will get it and look up how to reach the destination network. If the address is in the source network, which will be the network from where the packet originated.

You would need to create a completely separate new network, not add to an existing network.

What you propose cannot work.

What you're trying to do has serious implications. As Peter's pointed out it's possible with some workarounds but those are not easy to handle. Overlapping networks and proxy ARP become major pains over time as Ron's pointed out.

I'd propose a more sensible approach: use another subnet. Private IP addresses are free to use and you can easily just define a new subnet, set up the routes and you're done. If you really need the /28 subnet's hosts to map into the /24 net you could use destination NAT. NAT is generally ugly but not as bad as fiddling with proxy ARP and split route metrics.

A NAT router in front of the destination subnet takes care of translating those virtual addresses to the actual device addresses. That way you could also move those devices around at will, just changing their virtual address on the NAT router to something you can route.

without changing the IP address

If the reason happens to be because of some (legacy?) software package that has its licensing bound to an IP address (and/or MAC address?), things might be quite simple.

EDIT: ... and probably on the edge of being off-topic for Network Engineering, because more related to host and client configuration than anything else.

Then, try to fool the software/licensing into believing the server still has its old IP address:

(If there's even a MAC/IP combination involved with licensing, then just keep using the current NIC as the dummy one in the stub network, and add a new NIC for the "proper" network).

If however, the unchangeability is because client software cannot be reconfigured (in extenso: hard-coded IP addresses), then that won't help, I'm afraid, and you'll probably have to resort to the poison cabinet of networking, where bottles labelled "static routes on client systems" and "proxy arp" (see Peter Green's answer) are kept, and where you'll also find the jar with the "obscure NAT" pills.

Not the answer you're looking for? Browse other questions tagged routing subnet design or ask your own question.

10
High-Density WiFi & 2.4GHz Co-channel Interference design
5
Spanning Tree design considerations: MSTP and regions
11
Trying to fit centralised firewall into network topology
2
Network performance when gateway connection is 100Mbps
3
How can I introduce VLANs to an existing setup with wireless Access Points?
1
Moving to VLANs from 2 LANS
0
Cannot Ping from Cisco 3650 to Workstation
0
network slowness troubleshoot
3
What are the administrative procedures for moving the geographic location of a network?