VPNs are working in which layer of the OSI model? [closed]

As the following picture shows, it is possible to categorize VPNs in two general categories: 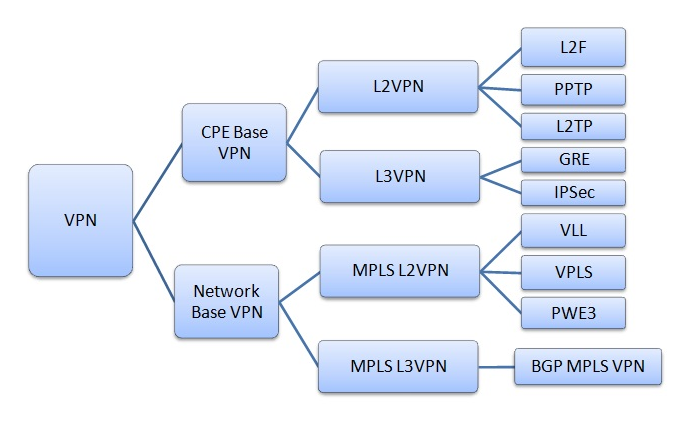 When it is required to choose a VPN for implementation in a network, how can we decide which one can meet the purpose?
Other than a technical issue, there are other key-value such:

How to create a matrix and figure out which one is more appropriate?

Off the top of my head, the most common would be:

As for which layers they are each working at, it really comes down to what you mean by "working".

L2TPv3, PPTP and IPSEC all establish and operate over the top of IP connections (Network Layer). PPTP uses TCP and GRE, while L2TP and IPSEC Aggressive-mode rely on UDP (all Transport Layer protocols).

SSL VPN (which isn't really standardised) relies on HTTPS/TLS depending on the implementation, so you could say it operates at the Application Layer.

Having said all this, once the tunnels have been established, they act more like Network layer interfaces, with PPTP allowing certain non-IP protocols to be tunnelled and L2TPv3 which behaves more like a Data-Link Layer interface, allowing pretty much any L2 frame to be encapsulated.

There are several types of VPNs, depending on how you count. Two of the most common are IPSec and SSL VPNs.

VPNs do not fit very well into the OSI model -- they were developed after the model was created. Also, as has been stated many times on this forum, the OSI model is just an idealized model of how things "ought to work." It's not an accurate representation of how things actually work.

Not the answer you're looking for? Browse other questions tagged vpn osi tunnel or ask your own question.

10
What layer of the OSI model deals with ports?
2
When last was the OSI model layer updated
1
Why are the computer systems in the OSI model called "open systems"?
2
PPP, VPN, Tunneling and OSI model
1
Does the physical layer is OSI ISO model add any header?
1
What requirements must general firewall/routing software meet, to make OSI 2 port mirroring work correctly?
0
OSI Layer Model
0
OSI model: the session initializes the communication?