How to use QSFP28 transceiver with 100G datacenter？

Do you have any experience With qsfp28 transceiver on 100g data center? have you ever make 100G QSFP28 to be Used for 40G? 100Gb/s QSFP28 IR4 PSM4 (Parallel Single Mode 4 lanes) Optical Transceiver, 2km would it be okay with 100g data center, anyone give me some advise please?

There's a wide (and growing) range of 100G PHYs. You need to get a transceiver that is compatible with the DC uplink, e.g. 100GBASE-SR4 or -LR4.

The transceiver you've linked to states "100GBASE-IR4" which seems to be a 1310 nm, single-mode variant of 100GBASE-SR4. It doesn't seem to be compatible with anything else.

Using a QSFP28 transceiver with 40 Gbit/s is possible but requires the port to support that mode with that transceiver. 40G normally uses QSFP+ transceivers which may or may not work in a QSFP28 slot, depending on the switch and transceiver's compatibility.

The usual way to connect is to get the DC's uplink options, look at the device(s) you've got and check out which kind of transceiver you need to connect. Then you go shopping.

QSFP28 CWDM4 is compliant with the standard especially formulated for the deployment of 100G within 2 km of the data center. The interface of the QSFP28 CWDM4 optical module conforms to the duplex single-mode 2 km 100G optical interface specification, and the transmission distance can reach 2 km. It is the most widely used 100G QSFP28 series optical module in data centers.

By comparison, QSFP28 LR4 possesses all the features of QSFP28 CWDM and is a more cost effective and competitive in the application of 2 km transmission.

The two interface models are illustrated as follows: 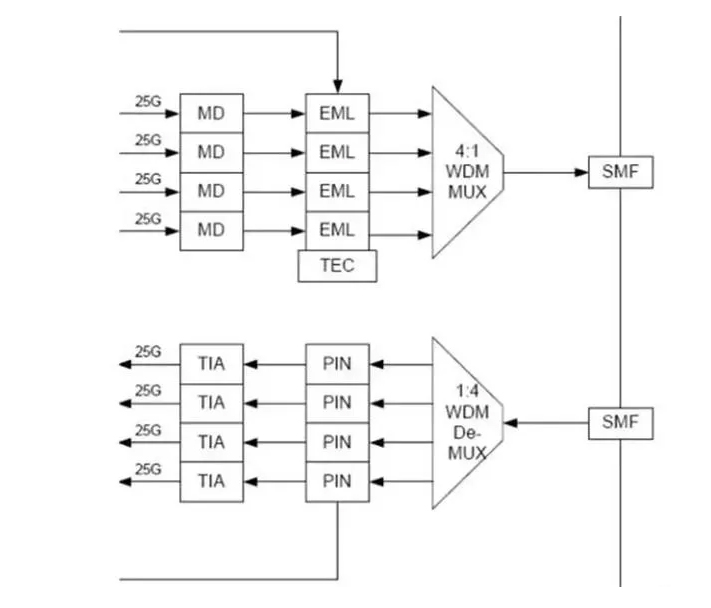 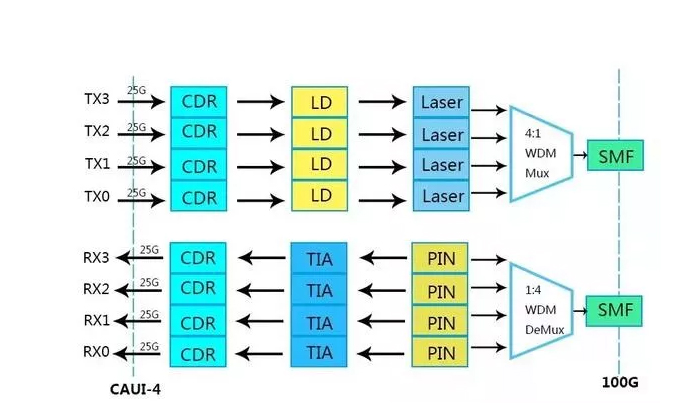 In addition to QSFP28 CWDM4 transceiver, QSFP28 PSM4 is one of the alternative solutions in intermediate transmission distance.

QSFP28 PSM4 optical transceiver is a four-channel 100G interconnect solution over a parallel SMF and it is mainly used for 500m link application.

8-core SMF builds four independent channels(4 for transmitting and 4 for receiving)for 100Gbps optical interconnects, and the transmission rate of each channel is 25 Gbps.