I have the following topology set on AWS where there are 4 CSR 1000v Routers deployed and Segment Routing enabled in which the Segment Routing Headend is R1 and the destination is R3. 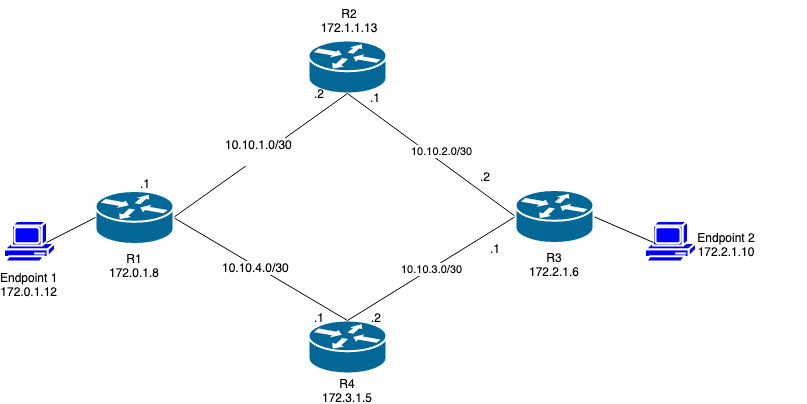 First of all, the traffic generated by iperf from Endpoint1 is 5Mbps during the test. Using SNMP and Cacti I could get throughput across the links (GRE Tunnels) which are summarized in the following:

The router R1 is being passed 2 times because of SR policy, so it should have had 2 times of the traffic sent (5Mbps) which means 10Mbps as Outbound throughput. However, The R1 the interface Gigabitethernet1 got nearly 7Mbps as Outbound throughput and fewer than 7Mbps on the Inbound, (because the R1 has been passed twice 7Mbps/2= 3.5Mbps for one time passed) which I really don't understand why. I double checked there are no packet drops on the router.

Another argument that the traffic sent to the other nodes in one time is 3.5Mbps is recorded in Tunnel0 of R1 as the below figure shows, the Inbound Throughput is nearly 3.5Mbps, which means the real traffic sent across the network nodes is 3.5Mbps not as iperf generate 5Mbps.

Here I provide some figures to better understand. The following is the GiabitEthernet1 of R4.

Another interesting point is why the Gigabitethernet1 of R2 and R3 recorded 10Mbps?

Does anybody have assumptions or theories?