What is the relationship between the bandwith on a wire and the frequency?

I am trying to learn networking (currently Link - Physical Layer); this is self-study.

I am very confused about one particular thing:

Suppose I want to send a data on the wire something like this:

Well the data to be sent must be represented by a signal, and the signal in this situation is the "change in the voltage" on the link / wire (assume we are using cables, not wireless link).

So Fourier proved that with enough frequencies a signal can be represented pretty well. 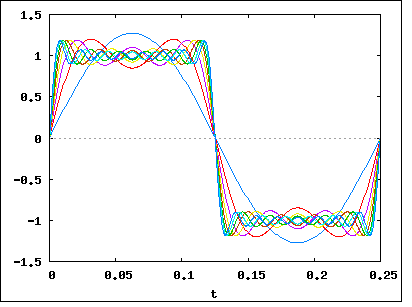 I still don't understanding the relationship between a signal on the wire, and the Frequencies.

Also for example on a DSL line, for Frequency Division Multiplexing, because multiple users will be allocated less frequency, there will be less bandwidth per user on a given link / wire. What does it mean to allocate less frequency on a wire? Less repeating of what?

The voltage patterns on the wire repeat.

In extremely simple communication systems, you might cycle the line's DC voltage above or below a threshold, as shown in your ASCII-art... __|‾‾|__|‾‾|__|‾‾|__|‾‾. Suppose your thresholds are +5v and -5vdc; modulating binary data through two DC voltages would only yield one bit per voltage level (each voltage transition is called a symbol in the industry).

More complex systems that are transmitted over longer distances use more complex modulation schemes, such as FDM or QPSK, to pack more data into a given bandwidth on the wire.

Generally speaking, you can modulate using combinations of:

Let's just consider an Frequency Modulation system, which has two states on the wire...

This modulation scheme requires 1.5KHz of bandwidth on the wire. However, that tells you nothing about the bit rate transmitted (which confusingly, is also known as 'bandwidth', but let's not use an overloaded term).

One reason that an FM system might space 0 and 1 symbols 1.5KHz apart is because there are limits to how well, how quickly, and how economically the modem can measure the frequency changes on the wire.

As a general rule, you can build faster and cheaper modems if you have more bandwidth available to you.

I have studied your response, but I am still confused about some things. I can only send 1 and 0s over a wire as far as I understand. So if 1.5 KHz is enough for this, why would I use more bandwidth?

I addressed the question in the last section, but let's continue with the FM modulation example. Real systems have to account for receiver sensitivity, and factors such as how well a band-pass filter can be implemented.

Suppose the 1.5KHz bandwidth available to the modem only yields 9600 baud, and that's not fast enough; however, you might build a 20KHz modem that is fast enough (maybe you need 56K baud).

Why is 20KHz better? Due to the realities and imperfect slopes on band-pass filters and other components, you may need that much bandwidth to implement the correct modulation and line code. Maybe with 20Khz, you could implement QAM scheme, which gave you 3 bits per symbol, resulting in a maximum bit rate of "9600*8", or 76.8 Kbaud (note: 2**3 = 8)

You're asking good questions, but it's very hard to explain this without getting into the guts of a real design. If you read some electronics books about receiver design, or take some electrical engineering courses this material is covered.

Mike offered an excellent answer but not exactly to what you were asking.

Bandwidth, by definition, is a range of frequencies, measured in Hz.

Now, we want to send it through a channel, such as a copper wire, or an optical fiber. So first, let's talk a little bit about channels.

When talking about bandwidth in channels, we actually talk about passband bandwidth which describes the range of frequencies a channel can carry with little distortion. Say I have a channel that can only pass signals whose frequency is between f1 and f2. Its frequency response function (the channel's reaction to signals of different frequencies) might be something like this: 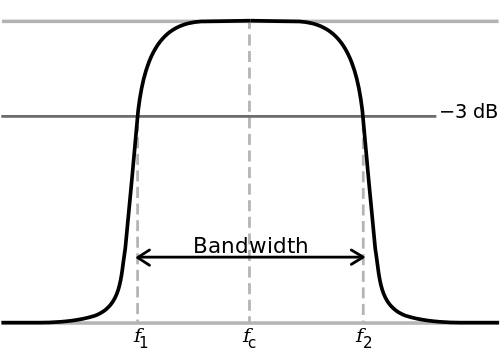 The bandwidth of a channel depends on the physical properties of the channel, so a copper wire will have a different bandwidth from a wireless channel and from an optical fiber. Here, for example, is a table from wikipedia, specifying the bandwidths of different twisted pair cables.

If our example channel has a bandwidth of 1Mhz, then we can fairly easily use it to send a signal whose bandwidth is 1Mhz or less. Signals with a wider bandwidth will be distorted when passing through, possibly making them unintelligible.

The exact relation between bit rate and bandwidth depends on the data being sent as well as the modulation used (such as NRZ, QAM, Manchseter, and others). The classic way in which people draw bits: __|‾‾|__|‾‾|__|‾‾|__|‾‾ is what NRZ looks like, but other modulation techniques will encode zeroes and ones into different shapes, affecting their bandwidth.

Since the exact bandwidth of a binary signal depends on several factors, its useful to look at the theoretical upper bound for any data signal over a given channel. This upper bound is given by the Shannon–Hartley theorem:

C is the channel capacity in bits per second;

S is the average received signal power over the bandwidth (in case of a modulated signal, often denoted C, i.e. modulated carrier), measured in watts (or volts squared)

N is the average noise or interference power over the bandwidth, measured in watts (or volts squared)

S/N is the signal-to-noise ratio (SNR) or the carrier-to-noise ratio (CNR) of the communication signal to the Gaussian noise interference expressed as a linear power ratio (not as logarithmic decibels).

One important thing to note however, is that the Shannon-Hartley theorem assumes a specific type of noise - additive white Gaussian noise. The upper bound will be lower for other, more complex, types of noise.

No, seriously, end of question and answer. You're done, move on to Layer 2.

I don't mean to be rude or smartass. Your question has delved way too far into the electrical engineering aspect of the Physical layer to be about what is known as network engineering. What you're asking is far more relevant to telecommunications, electrical engineering, or even computer science than network engineering in all but the strictest, most literal sense. It is also not relevant for anyone but extremely specialized personnel developing either the hardware or the protocols implemented by the hardware. I'd be quite surprised if most CCIE's could answer this question to the degree Mike Pennington did... and wouldn't be surprised at all if they didn't know enough to ask the original question with as much depth as you did!

Not the answer you're looking for? Browse other questions tagged bandwidth layer2 or ask your own question.