Ask Question
Asked 2 years ago
Active 2 years ago
Viewed 662 times
0
Closed. This question is off-topic. It is not currently accepting answers.

What happens if a host on the network receives an IP packet with a MAC source address that differs from the MAC address in the local ARP table for that source IP.

The ARP table entry for that IP was and will be filled via an valid ARP response.

I thought the receiving host just takes the source IP and and tries to find the corresponding MAC address in its local table.

First, thanks a lot for the answers so far, but they're only about ARP packet and table handling. Thats not answering my question, so i think i have to clearify the scenario: 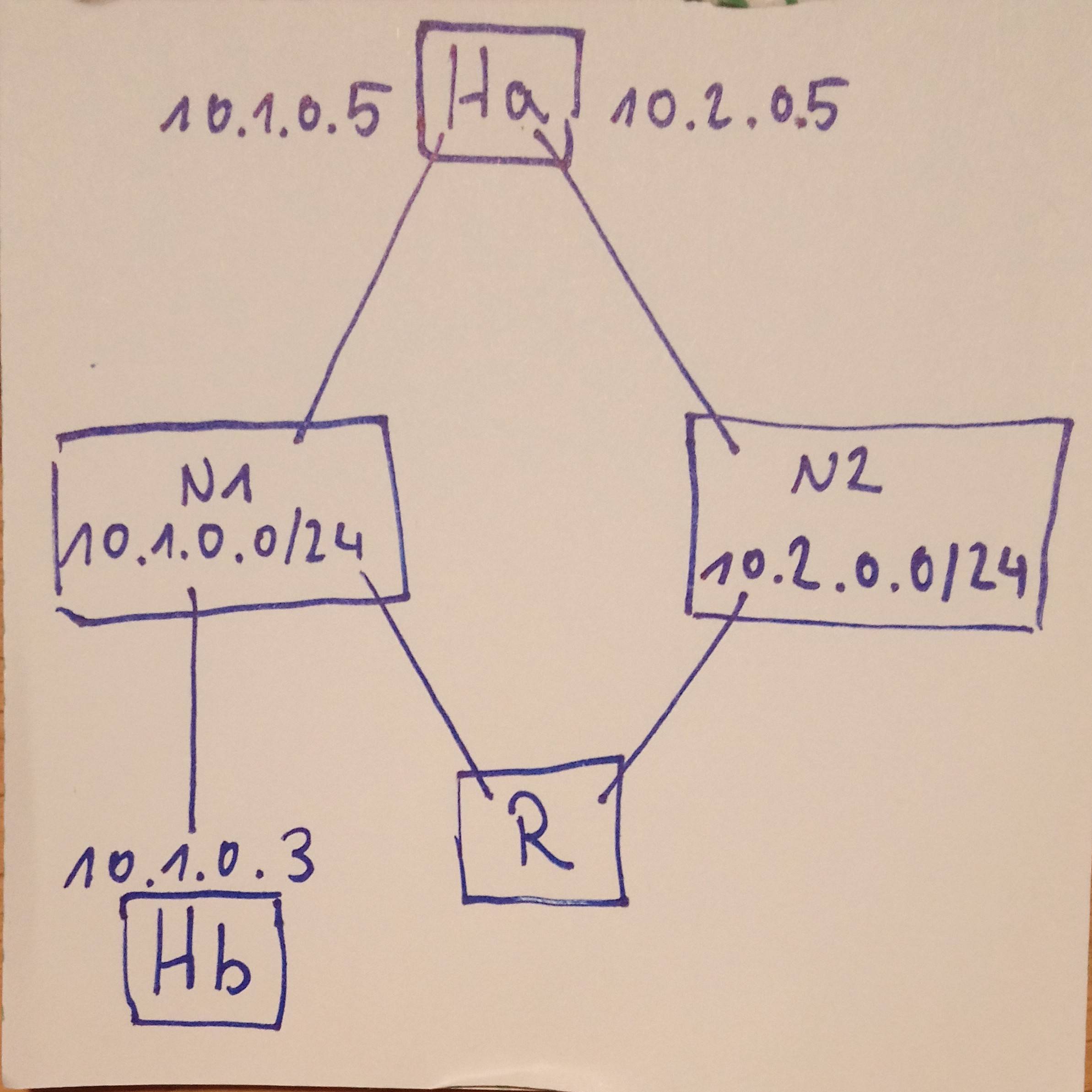 Now I have noticed that host Ha just does not send a reply packet (no packet is leaving the interface). The question is now for what reasons host Ha behaves this way.

Received frames not having the Ether Type field set to 0x0806 do not update the ARP table. This is by design, and you can read about it in RFC 826, An Ethernet Address Resolution Protocol, where it describes how ARP works. In fact, not everything sent to ARP updates the ARP table. ARP replies certainly do, but other things received by ARP will only update the ARP table if an entry already exists for that IPv4 address:

Your question is completely different now, and that is bad form. Please ask a different question in a new question.

Ha receives the frame from the router on its 10.2.0.5 interface, which sends it up the network stack. Ha then processes the datagram, and it sends a response back to Hb out its 10.1.0.5 interface because its internal routing table has that network as a directly connected network.

It sounds like you think that because a packet was received on one interface, it should reply on that same interface, but that is not how it works. Each packet is routed separately, regardless of any packet that may have come before. Your scenario will never send a Packet from Ha to Hb out the 10.2.0.5 interface.

If you are not seeing a reply on the correct (10.1.0.5) interface, then there is something wrong with your host, and its behavior is off-topic here. I have described what a host is supposed to do, but if yours does something different, then you have some misconfiguration, a measurement problem, or the behavior of your host is non-standard. None of those problems are something to ask about here, and since you claim a lab, it would be off-topic for Server Fault, but you could try to ask about it on Super User, Unix & Linux, or Ask Ubuntu.

First of all MAC address table don't have IP addresses. The thing you describing is ARP table which contains bindings IP to corresponding MACs.

So there is 2 ARP entries static and dynamic one. For most of the time you will be using dynamic so if host receives the same IP address with different MAC address he will just update dynamic ARP entry with new MAC. For Static one host will not respond until you modify by hand arp record.

Reasons that linux host doesn't respond could be more for example if network using DHCP spoofing and DAI it will filter this packets if user will set his address manually instead of using DHCP.

Not the answer you're looking for? Browse other questions tagged mac-address layer2 layer3 networking or ask your own question.

2
Microsoft NLB - static MAC necessary?
5
Learn MAC addresses via replies to other hosts requests
1
How do protocol stacks determine the destination mac of reply packets?
4
MAC Table vs ARP
8
Does every host on the LAN share the same ARP table, or do hosts keep them individually?
0
ARP behaviors between hosts connected via switches
1
ARP table updated when receive message
0
How to get IP address of device from its MAC address on network?
1
How does the ARP table know to update if two hosts flop IP addreses?