Why do transport layer do data chunking. If there is fragmentation in Network Layer

I just curiously wanted to know about the question regarding L4, L3 Data Chunks, IP Fragmentation :

According to Wikipedia, data chunk happens at L4: "Transmission Control Protocol accepts data from a data stream, divides it into chunks, and adds a TCP header creating a TCP segment" Source: https://en.wikipedia.org/wiki/Transmission_Control_Protocol#TCP_segment_structure

Also, there is fragmentation happening at Layer 3(Network).. Now there are two questions here- 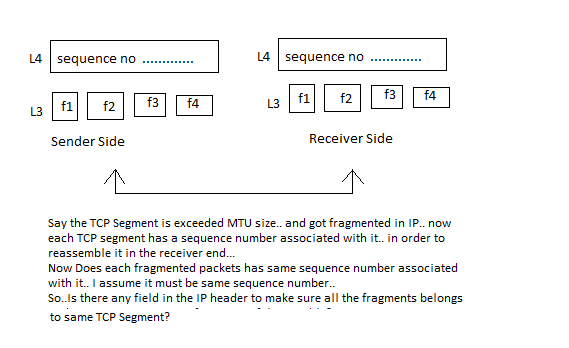 Any help is greatly appreciated..

The transport-layer protocol needs to make sure that data can be properly packetized. It it lacks support for that (like UDP), the application layer needs to take care of that.

IP fragmentation in the network layer is an mechanism primarily intended to enable forwarding when the MTU within the path shrinks. It is not intended as the primary sizing mechanism due to its limitations:

Reassembly of fragmented packets happens at the network layer, before data is passed up the stack to the transport-layer protocol.

Not all transport-layer protocols support data segmentation (e.g. UDP doesn't), so datagrams too large for the MTU need to be fragmented or sent with smaller data chunks.

Initially, fragmentation was the strategy to deal with varying MTU sizes across a large network but due to increasing router load and being generally inefficient that has largely been replaced by path MTU discovery. For IPv6, routers do not support fragmentation at all, they drop oversized packets (the sending host may fragment though).

TCP segmentation process is based on MSS (maximum segment size, that is based on the MTU (usually) and can be different for both sides of communication). It is segmentation (right name for this process), not fragmentation. "If data chunking is happening or not, there will be a sequence number for each TCP segment" is not right sentence - if you see sequence number, it is segmentation process. It begins anytime you start send data via TCP sessions, and it does not matter, either application use data portion more than MSS or not - you can see sequence and it is TCP segments.

MSS is based on MTU right now just to avoid IP fragmentation. So idea is put one TCP segment to one IP packet.

IP fragmentation is not based on TCP at all, it based on MTU of the interface and can be used for TCP/UDP/ICMP whatever. It is another path of OSI model. Full IP packet is recreated based on the IP flags (more fragments, offset value).

You can read a lot about this in detail, for example, here https://www.cisco.com/c/en/us/support/docs/ip/generic-routing-encapsulation-gre/25885-pmtud-ipfrag.html

8
Why is the IP layer aware of higher layers in the network stack?
3
What is the need for transport Layer?
2
Difference between data link and transport layer error detection?
3
How does a TCP sender recognize out-of-order ACK packets?
5
Are there any transport layer protocol without the concept of port?
1
Error control in Transport Layer vs Data Link Layer
3
What is the relationship between throughput and latency
4
Confusion about data fragmentation/MTUs - why was it introduced in the first place?
0
How UDP checksum get IP address to make pseudo header in transport layer?