I've been searching StackExchange and the Internet for a while looking for a solution for my networking question. Some articles I found are here, here and here, but these don't need to deal with a wireless setup. I will try to describe my networking question below. I just know some basic little bit about networking, so I'm absolutely no expert, hence the lack of proper terminilogy; 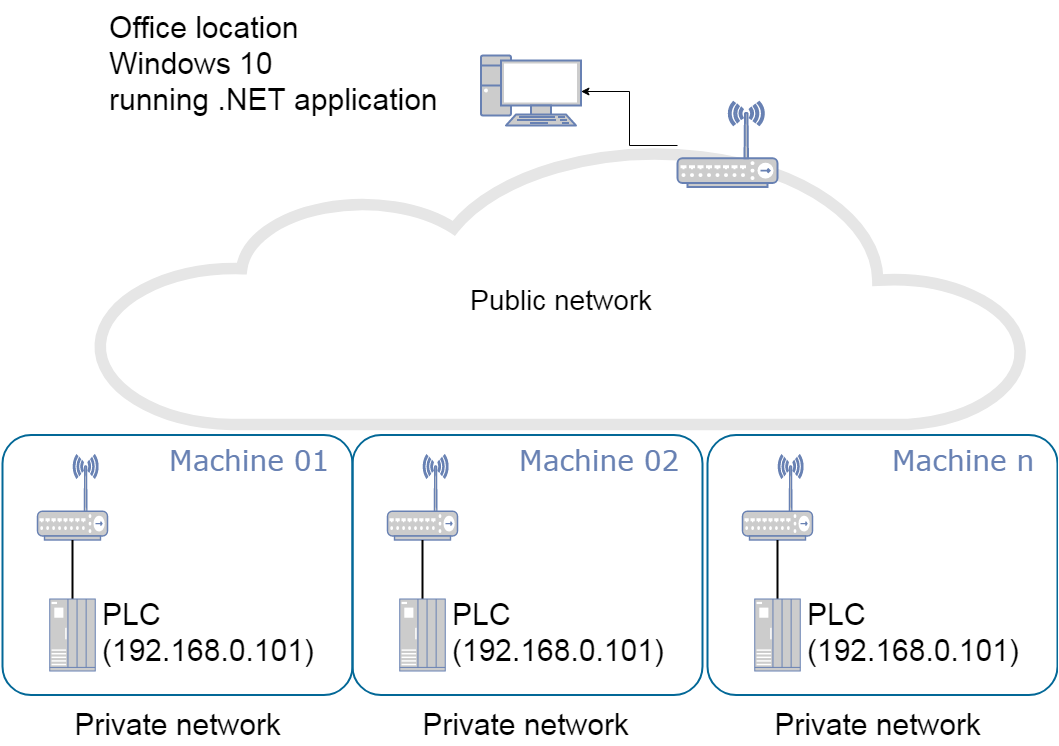 Working for a machine manufacturer, we produce machines running on devices (PLC's) with static IP addresses. These devices are equipped with RJ45 network connections. We're dealing with about 10 to 15 machines simultaneously at one given time located on the shopfloor spanning about 200m x 200m. Their physical location varies depending on where the shopfloor has room for a new machine to be built. Their static IP addresses are (for the best part of them) always the same and identical. So for example, there's 10 machines with IP address 192.168.0.101. Now I'm looking into a way of reaching all these machines from a single office location in order to gather some data from the devices using a selfmade .NET application.

WiFi is the first obvious criterium in my search considering the locations being variable. So I believe every PLC needs to be hooked up to its own wifi router to get them 'on-air'. Then the wifi side of these routers must be configured to share one big wireless network like a mesh system would do. I'll call this the 'public network'. The computer in the office would be part of this wireless public network either through its own wifi NIC or through a wifi router which could be the 'boss' of the wireless public network bringing the SSID in the air.

Now I have already come to the conclusion that the wifi routers needed can not be simple household-like routers. During my search I have come across wifi routers supporting 'WiFi on WAN', making it possible to make the PLC's have their own private wired network on the LAN side of its own router separating it from the wireless public network. As far as my knowledge goes, this would prevent the duplicate IP addresses in the public network. But for as I can see now, this works fine as long as you are on the private network(s) in this setup. But how to address the correct PLC from the centralized office location? I would need to find a way to tell the WAN side of the router in a machine to connect me to the PLC. I've read about NAT, VLAN, port forwarding, etc, but I can't realy figure out how to bring the right stuff into the equation to select the right type of router.

Am I thinking way too complicated? Could anyone recommend specific routers capable to do what I need?

You are fundamentally trying to create a mini-clone of The Internet in your shop. How is it not a problem if every Linksys router LAN is set to 192.168.1.0/24? It's because those LANs aren't directly connected; NAT translates those identical LAN addresses to globally unique WAN address(es). You need something similar in your shop... i.e. "a linksys on every desk." The "WAN" side (company LAN) would have a unique static address NAT-mapped to the PLC address.

(The actual device used could be almost anything. "Linksys" is just for visual reference.)

In front of each device sits a NAT router that actually owns that address. Each one translates its "upper" address 192.168.x.101 to the "lower" 192.168.0.101 (DNAT or port forwarding). That requires any halfway decent NAT router and could also work with many consumer-grade (off-topic) devices.

Some NAT routers even support multiple, identical translations. How that is actually done depends heavily on the router in question. With that you could have all translations in one device. The downlinks don't need to be physical: you could use VLAN trunking to a switch and then fan out to the devices there.

Of course you could use a Wi-Fi bridge in each downlink, but that's pretty independent of the actual translation.

Not the answer you're looking for? Browse other questions tagged wireless nat lan wan port-forwarding or ask your own question.

2
On a wired LAN of 2+ computers, can you securely provide wireless Internet to one and not the others?
5
What risks to continue to use a legacy public network address in specific address/port NAT on a private network
4
Network Diagram for IPv6 LAN
0
Designing a wireless network in a building
1
Cisco 1921 private LAN can't access internet on WAN interface
5
Industrial machines lose connectivity when one is powered off
2
How does NAT ensure that every machine has a unique public IP?
3
Alternatives to 802.11* wireless bridge?