Upgrading Cisco 819 to 809, can I connect devices to 2 routed ports and be on same subnet?

The company I work for has multiple remote "IoT" style sites connected back to the datacenter via a Cisco 819 cellular router. We are in the process of upgrading these to the newer Cisco IR809 routers since the 819 is EOL and is becoming increasingly unreliable. The vast majority (>90%) of these sites are a stub network with a singular host connected directly to the router. All of these upgrades are going very smoothly.

The subnet in question here has 2 hosts (camera and sensor) connected back to the datacenter via a GRE tunnel. The stub network has a subnet with a /29 mask. The existing configuration leverages the flexibility of the 819's switchports and creates a routed SVI connected to a VLAN for the 2 devices. I'd like to be able to replicate this configuration but unfortunately the 809's 2 routed ports are unable to be utilized as switchports.

Given this is a remote data collection site (~50 miles from the datacenter) with nearly 0 likelihood of additional hosts, I'd like to avoid also installing a switch if possible (2 points of failure, additional expense, more maintenance, etc.) I would also prefer to utilize the same equipment as the other remote stub networks which all only have a singular host connected via an IR809.

Is such a configuration possible? 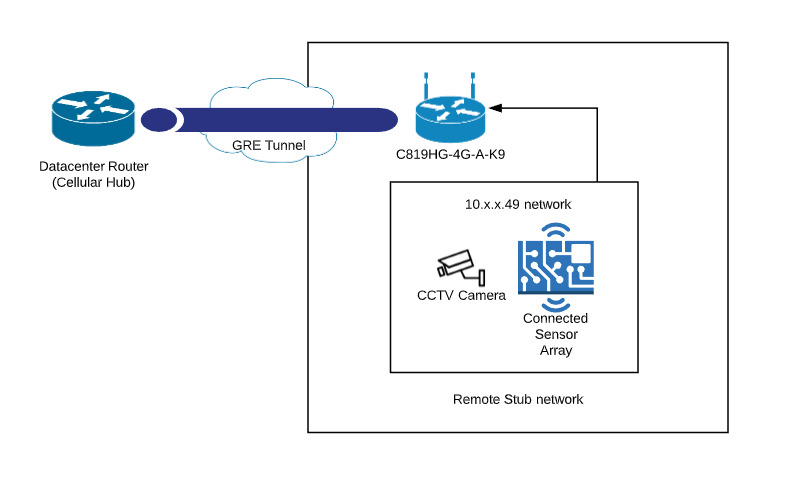 If your router can use IRB (Integrated Routing and Bridging), you could set up something like this:

Not the answer you're looking for? Browse other questions tagged cisco switch router vlan bridge or ask your own question.

0
InterVLAN routing on Cisco router with multiple trunks
1
Is it possible to configure Cisco ASR901 as a layer 2 VLAN switch?
0
Is It possible to make Router On A Stick with two physical interfaces in the router?
0
How do I bridge a Cisco 860VAE-W from VDSL to Ethernet?