My device is cisco Nexus 6001 Chassis (one unit dc switch)

But when I try to test this out (simply reconnect laptop on different ports of my switch), notifications are not sended to my logs.

The process of testing shown in picture: 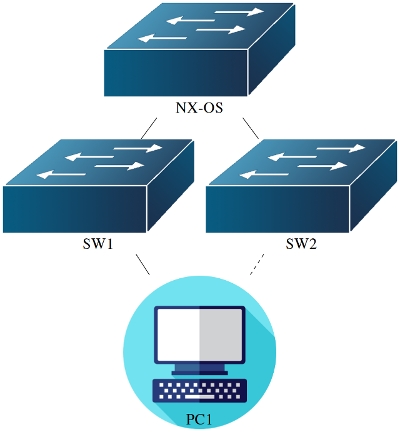 Simply reconnecting between ports on downstream switches. The vlan is the same, so the mac is flaps between port on upstream NX-OS.

P.S. Maybe there is problem in negative numbers.

Physically moving a device from port to port will not trigger a mac-move event. When you disconnect from port A, the link drops and all state is discarded -- including any known MACs on that port. Similarly, when you (re)connect to port B, no previous state is known; there's no latent knowledge of where that MAC has previously been.

A mac-move event will only be triggered if a known MAC is seen on a port where it is not known to be. [currently in the CAM tables] (eg. a wireless client roaming between APs.) The purpose is to detect attempts at spoofing -- i.e. I claim to have the MAC of the exchange server and trick machines into sending me that traffic.

The main problem is that mac move detection is workin a bit differently than on old IOS releases.

IOS every time drops log message when mac changes link where is nexus not. As the result mac move detection is exist and shows log message only when there are many flapping occurs between links. This is case where loops occur.

Generally I like old behaviour more than new one ;)

Not the answer you're looking for? Browse other questions tagged mac-address cisco-nx-os nx-os or ask your own question.