I'm giving you a high-level overview of my problem, no tech details.

I'd like to know how to solve this problem.

We got a Netapp replacing another NAS. The Netapp is connected to our Enterasys/Extreme network gear.

Since we have the Netapp we have managed to create trouble in the network several times.

Meaning: When performing the following kind of transfers to or from the Netapp:

it seems to have had an effect on our firewalls (VRRP cluster) such that they start failing over because VRRP HELLO packets are getting lost, potentially on every VLAN, not only on the ones where the Netapp is connected to.

Even when keeping the Netapp <-> backup/whatever traffic to the same L2 segment this happens. What could still be involved at that layer? It does not happen always or often, but often enough to indicate a problemm.

I was thinking about the buffering of the switches maybe posing problems? Can that even be? What would happen in those cases, would packets really get lost or would everything just be slower?

How do I solve this problem?

The FDB on the switches gets messed up: After a quick MASTER/BACKUP flap of the firewalls, the VRRP MAC is seen as indicated by the red arrows on the attached diagram (for some VLANs). So it's sending packets for that address in a loop I guess.

When I then issue a manual spanning tree flap by disconnecting one of the redundant links (the dotted lines leaving the datacenter switches) everything goes back to normal.

Note that in the meantime the setup is even simpler, the Netapp and test server connected to the same switch, still same effect. 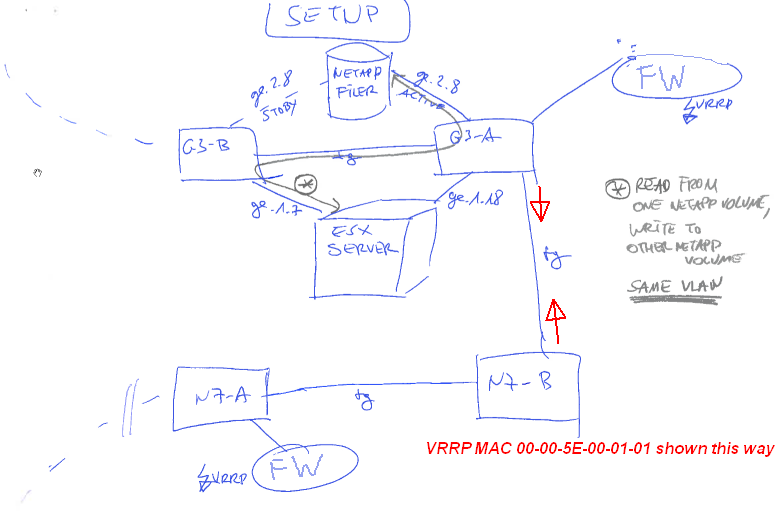 I said there are no routing protocols because we don't use much routing, it's reasonable to do so here. We also don't use gvrp and such. Putting wrong vlans on one end of the link and then have it automagically appear on the other end is no automatism I desire. But that is another discussion. We may chat about it, sure.

If I had errors to show you I would. But then I would probably be able to fix it myself. Since I have nothing so far, I am asking. I can merely notice the effect of something and am looking for potential causes. Switch CPU is already nice and next time I will take a live look. What about the buffering inside the switches? Can that be a factor?

Yes, to no avail, that's why am here. I sniffed, I analysed the config, I re-read the operating manuals. Nothing.

As I said we found that there has never been a problem as long as the new NAS wasn't there. Sure, this invites speculation. But good system administrators often operate by their guts in order to localize problems. I don't think I'm a bad admin, but my guts don't lead me anywhere here.

Currently I have set up a lab with one of our core switches isolated with only the NAS and a server on one VLAN and two PC pinging each other on another VLAN while the server and the NAS happily copy files to each other. Tomorrow I will see if there was packet loss on the PCs. However this is by far no simulation of a larger network.

Well, having the network firewalls down is not nice.

When someone performs a major transfer to or from the NAS, that should have no impact on the rest of the network. Those transfers need not be "major" by the way to cause problem, as I explained.

If you insist I can do that, but the whole network is quite complicated. But it's a standard enterprise network, with core, distribution and edge. Some spanning tree, some routers, some firewalls. No routing protocols whatsoever. We prefer to remain in control. ;-)

Probably not. The NAS has a 10G card. However the problem also arises when it is connected with the 1GbE interface only.

No, because aside from the install and config manuals of the items involved I currently wouldn't know where to look, as I pointed out.

No config for now.

When the firewalls flap we can't rely on anything pretty much anymore. But as I said the local firewall logs as well as local tcpdump clearly show VRRP HELLOs missing.

Yes, the VRRP HELLOs get missing on VLANs independent from the NAS' VLAN therefore causing trouble with the firewalls.

What configuration would be required? The NAS, the firewalls, the whole network?

I have and it is.

I'm sorry if it seems to broad but I need a few shots in the dark here as I said.

In fact we never really found out what was going on here. In the meantime the DC switches were replaced with higher end gear since there had been other problems with those devices.

Not the answer you're looking for? Browse other questions tagged troubleshooting packet-loss san or ask your own question.

19
Finding transparent firewall packet loss
4
How can I know about if there is a smurf attack on my network?
0
Three SG220-50P switches are rebooting randomly every few hours or days
4
High Jitter and Data Loss on Cisco Meraki Z1
0
Weird packet lost. Looking for some input
5
Cisco 2821 hangs with "No memory"