Let's take a look at the network topology below. 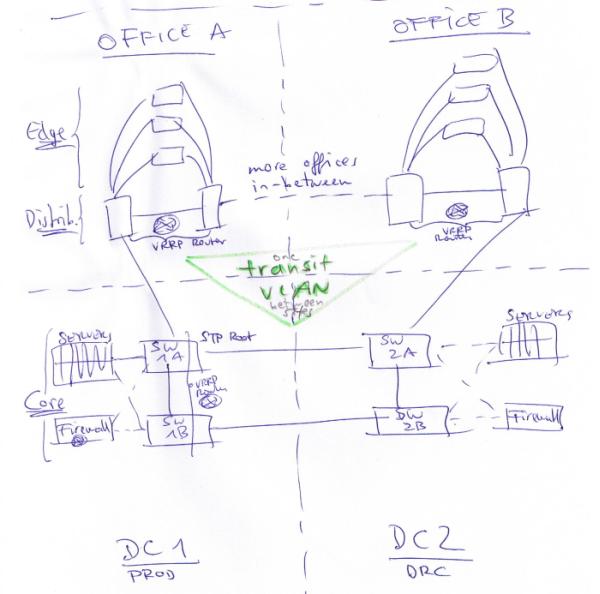 Each office uses mainly two VLANs (PCs & printers), as well as a few more for special services like time accounting devices or cameras. The firewalling is done at the DC.

Routing is done at 2 levels

Also there are quite some VLANs used for firewalling special servers.

Which brings me closer and closer to the question:

We see that most VLANs are indeed only needed on the DC switches since they have complete physical redundancy independent of the "ring" across the offices.

There is no real need having all the VLANs at the offices, except for some exceptions noted above.

For those which are not needed near the edge it may be (?) advantageous not to define them at all. This would create two (M)STP regions: one for the DC switches, one for the rest of the world, maybe even one for each office because they would need their redundant connections of their "private" VLANs protected too?

What would be the correct way to do this?

(If you don't plan to distribute VLANs across different redundant links, would you need MSTP at all? If yes, would it hurt to simply use MSTI0 for all VLANs inside the region then?)

I found drawing can be difficult without overloading the diagram.

However, some VLANs need to be firewalled AND present at the edge, meaning you would have to egress them from the DC up to the edge. (like the examples with the camera VLAN that I gave)

I feel that's part of the question. Obviously, the CIST root is at the Prod-DC. Depending on the presence of regions the CIST regional roots probably would be the distribution switches at the respective site.

Distance can be up to 20km for the links DC/office or office/office respectively. On the local site they will be no more than 50m.

(This is Enterasys gear.)

In principle yes. But that would be a major undertaking. I'd like to get the best out of the current situation and at least do the L2 stuff properly.

But remember the exceptions I pointed out, like needing a separate (e.g. camera) (V)LAN at the edge that is protected by the DC-firewall.

That's a philosophical question that we may tackle in chat ;-)

If you have switches A, B, C and D and connect A to C and B to D, I believe link aggregation is not possible. You would then have to connect e.g. A to C via two links, and if either A or C fails, you have a problem.

Yeah that's a part of my question too. As I understand it, even separating STP into regions will still have network-wide impact in case of recomputations.

Change the L2 links to L3 for the offices. ( Get help if needed)

As vlan's will end at branch a new solution need to be implemented for the camera vlan, here is a couple of options

Not the answer you're looking for? Browse other questions tagged spanning-tree design or ask your own question.

2
What would be an optimal design for linking multiple switches?
4
Connecting multiple links between switches
9
EoMPLS, MSTP, and RPVST
3
Network distribution/core design advice
3
MSTP with no single point of failure with 4 switches and 2 regions
5
How can I determine the STP designated bridge on Cisco IOS?
4
Spanning-Tree Interoperability between ProCurve core & Cisco access layer
2
RSTP / MSTP use cases and best practices