Not a four-way handshake in Cisco Packet Tracer?

TCP connection termination is performed by the four-way handshake, as shown below (the image is taken from here). 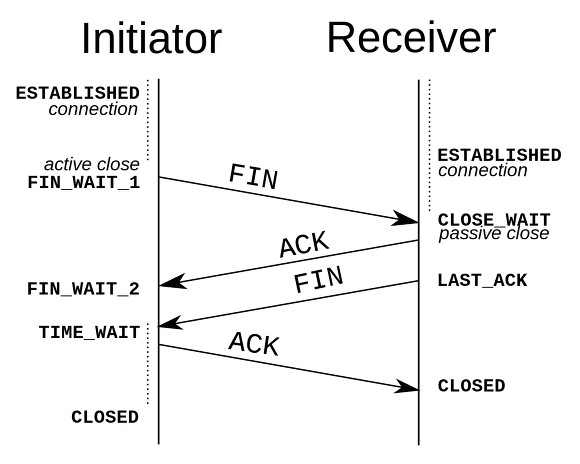 I tried to verify it on Cisco Packet Tracer. With the following topology, I captured some packets (shown below) by initiating a http request.

By analyzing the last four tcp packets (tcp connection termination), I got this: 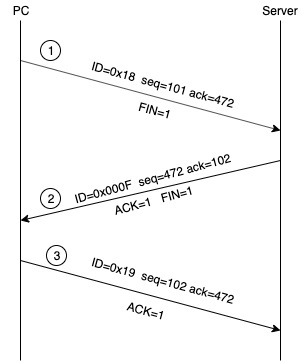 It looks like a three-way handshake. Please explain it.

I was wondering if the request packet from Sever to PC (label in 2) carries additional ACK information (piggybacking ACKs)? If yes, how do I know if a packet is piggybacking?

This looks like a four-way handshake where the server was done sending data to the client before the client closed its half of the connection.

I could be wrong, and I'm a little curious about the sequence numbers in the third diagram, but I'm not sure where the confusion lies either.

Note that if the client had made a request for a large (e.g. 500MB) file and then immediately closed its side of the connection, you would see the four-way closure more clearly, and it would look like:

I hope that helps

It's called a four-way handshake since each side signals a FIN and expects an ACK.

The side receiving the first FIN usually combines both flags in a single segment, just like in your simulation.

Not the answer you're looking for? Browse other questions tagged tcp packet-tracer or ask your own question.

2
Using StreamSocket() mrthod of Scapy to send ECN enabled TCP packets
1
Dropping packets between router and firewall without firewall rule
1
Sequence numbers of segments in three way handshakes of TCP connection establishment or termination
10
Does the destination port change during TCP three-way handshake?
0
Data sent with the "three way handshake" ack , but it is not TCP fast open