I was trying to understand TCP connection establishment and termination steps from Forouzan's book.

In third step of three way handshake of connection establishment, it says following

The client sends the third segment. This is just an ACK segment. It acknowledges the receipt of the second segment with the ACK flag and acknowledgment number field. Note that the ACK segment does not consume any sequence numbers if it does not carry data, but some implementations allow this third segment in the connection phase to carry the first chunk of data from the client. In this case, the segment consumes as many sequence numbers as the number of data bytes. 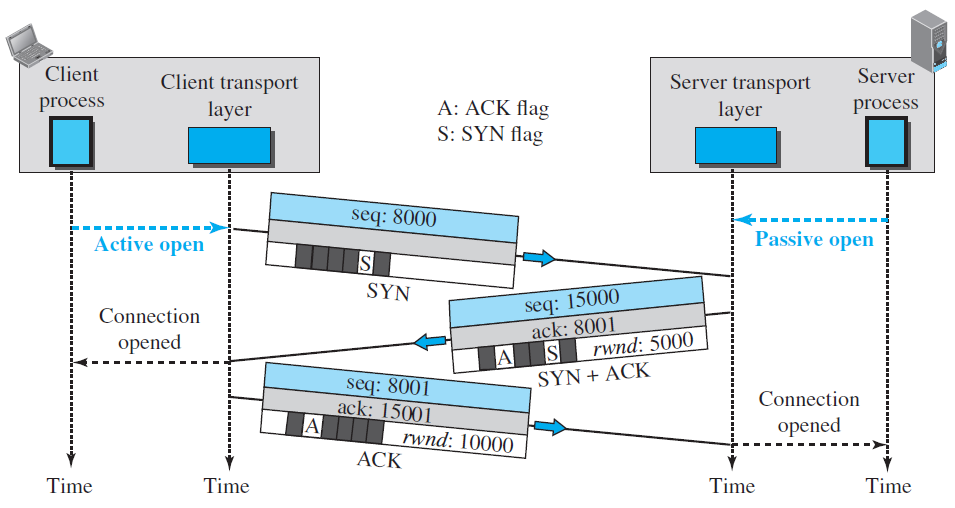 Q1. I dont get bold faced sentence. It says third segment does not consume sequence number if it is only ACK and does not carry any data. But, in the diagram, both first and second segment is shown to have different sequence numbers 8000 and 8001. I felt both should be 8000.

In third step of three way handshake of connection termination, it says: 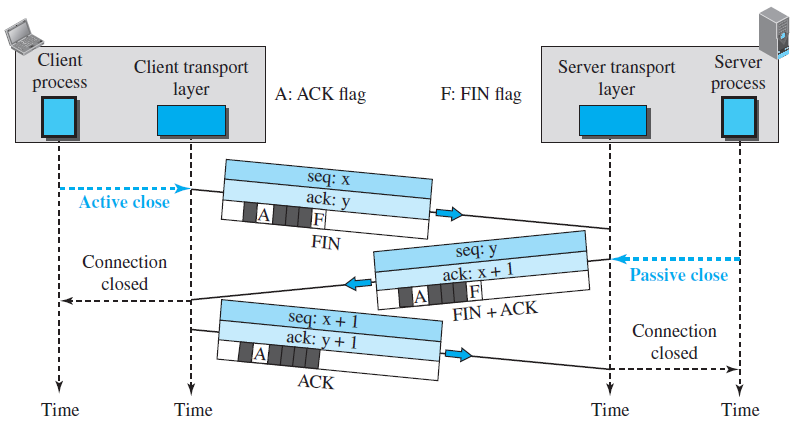 Q2. Again I dont get bold faced sentence. It says if ACK segment does not carry data, it wont consume sequence number. But in diagram sequence numbers of first and third segments are different: x and x+1. I felt both should be x.

Am I making some mistake here to understand diagrams?

At some point later in the book, while explaining how re transmission timer is calculated, it shows connection establishment phase as follows: 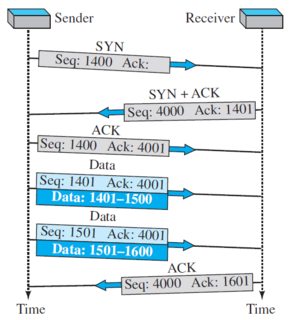 If you understand that, then the second diagram also makes sense. Remember that almost every segment after the initial handshake will carry both data and have the ACK flag set. The FIN segment could be carrying data, too; it is simply telling the other side that it is done sending, but the other side could continue to send data until it is done. Apparently, the other side is also done, replying with a FIN, but also an ACK and the acknowledgement number needs to be X + 1 to indicate that it acknowledges everything less than that, and any data received next would need to start at X + 1.

In the third diagram, the two segments that have the sequence number of 1400 are correct because neither shows to be carrying any data. It is the data that determines the sequence number, and it is what is next expected in the acknowledgement number.

Q1: Even if it is not carrying data, the SYN segment is consumming one byte in the sequence numbers, because the SYN flag must be acked by peer. That's why the server replies with an ACK of 8001 and the next client segment sequence number is 8001.

Q2: The FIN Flag must also be acked (so +1 in server reply) and means "I'm done with sending data". That's why after that segment, the client cannot send any data anymore (but it can still receive from server as long this one has not sent FIN flag yet).

In the third diagram, it is a glitch since SYN flag counts as 1 byte (the peer acknowledges correctly the SYN. In real network, this would trouble the server since it looks like a retransmission without the SYN flag...). The sequence number of the third segment should be 1401 (like the fourth segment).

Not the answer you're looking for? Browse other questions tagged tcp protocol-theory transport-protocol layer4 or ask your own question.