Ask Question
Asked 8 months ago
Active 8 months ago
Viewed 194 times
0
This question already has answers here:
Why do I need a crossover cable to connect devices of the same type? (3 answers)
Closed 9 months ago.

It is often said that crossover cables 'reverse the transmit and receive signals' compared to straight through cables. However I am yet to see an actual explanation of why the reversal of signals is required, and the effect that it has. Thus, I pose to readers the following questions:

Please keep technical jargon to a minimum; if possible. I am not a professional in this area, just trying to gain a conceptual understanding of how this form of cabling works. Thanks!

For rather obvious reasons, the transmitter on the one side of a link needs to talk to the receiver on the other side of the link. For this, the twisted pairs must be crossed in some fashion.

When 10BASE-T came up (or rather StarLAN, its predecessor), twisted-pair telecom cabling already existed. Incidentally, that cabling used straight, 1:1 connections throughout. For 10BASE-T to get the required crossover, a scheme was devised that put ports wired one way on the network concentrators (only repeater hubs at that time, later on joined by switches), and ports wired the opposite way on all other devices (NICs, routers, ...). The standard wiring is called MDI, and the hub wiring is called MDI-X since it is crosswired. 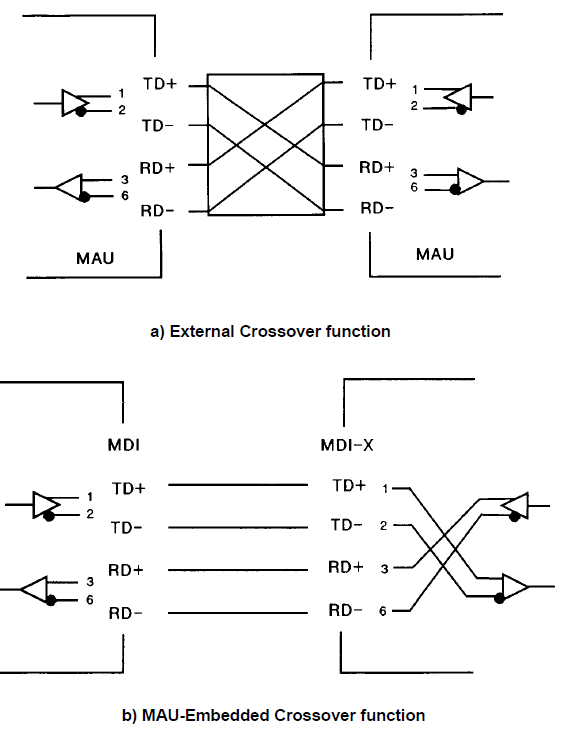 The MDI/MDI-X scheme with straight cables works fine as long as you connect all devices to hub ports. However, when you connect two hub ports or two NICs to each other, the required crossover in the port is missing (or double) and you have to use a crossed cable to pair Tx and Rx correctly.

For 20 years now, the need for crossover cables has all but vanished due to the invention of Auto MDI-X - these ports figure out by themselves if they need to be an MDI or an MDI-X port. For Gigabit Ethernet ports that feature is practically given and many 10/100 ports support it as well.

Not the answer you're looking for? Browse other questions tagged ethernet networking cabling or ask your own question.

12
Why do I need a crossover cable to connect devices of the same type?

1
Cabling and Topology Confusion
1
Do straight-though and crossover still have any play in today's business
3
Trying to understand crossover cables
1
What classifies as crossover cable?
2
Is the patch/crossover type of cable really unimportant in a GBe network on a structured cabling with a passive switch panel?
1
Can bad cabling affect the overall network?
0
Uses of Rollover Cable
0
setting up a VLAN and joining 2 buildings through underground cabling