STP Convergence: How does a port initially in blocking state know it needs to change to a designated port?

I am attempting to gain a better understanding of how STP converges when certain state changes occur that affect the STP topology. In this scenario (see below) Switch A (SwA) is the root switch with Switch B (SwB) and (SwC) connected by a single link both to SwA and to one another (so a mesh topology). In this case, the root ports for both SwB and SwC or those ports directly connected to SwA. Also in this case, SwB wins the designate port election based on the fact that it has the lower BID. Thus, it configures its port on the link that connects to SwC as a DP in a forwarding state with SwC configuring its corresponding port in state blocking. 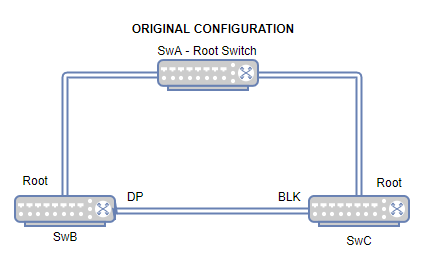 My question is this: What exactly happens if SwB initial root fails (see below) and it now needs to select a new root? I understand what occurs in SwB's case. It will go through the STP process again and ultimately settle on using the port currently connected to SwC as its new root (formerly a designated port). What I don't understand it what happens on SwC since it has configured the port on itself that connects to SwB in a blocking state. My CCNA books states that a port in a blocking state receives Hello BPDUs, but discards them and does not process them. The book also states that a port in a blocking state will not send out Hello BPDUs. How, therefore, does SwC know that it now needs to configure this port as a designated port since, on the corresponding side, SwB will be using this link as its root? Would it be because it would cease receiving Hello BPDUs on this port and, after the expiration of the Max Age Timer, begin the process of changing the STP topology? 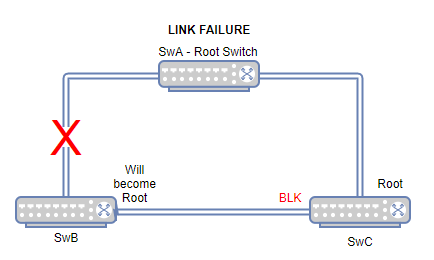 Do not confuse blocking the VLAN frames with blocking BPDUs. A port in the blocking state is still enabled, and it will drop frames for the VLAN it is blocking, but BPDUs are not blocked because they use a special link-only multicast destination MAC address. A Cisco switch port could be a trunk using PVST, and the port could be blocking for some of the VLANs, but not other VLANs, because it is per VLAN.

The root bridge (the other end of the down link) will send a topology change notification, so SwC will go through the full reconvergence, and it will go through listen/learn on the formerly blocked port.

STP is constantly sending and receiving BPDUs so that it will notice whenever there is a topology change, and the root bridge will send out the TCN to all switches when it is informed of a change, and all the switches will go through the full convergence to determine a new topology.

Not the answer you're looking for? Browse other questions tagged switch protocol-theory spanning-tree or ask your own question.

5
How can I determine the STP designated bridge on Cisco IOS?
2
In RSTP, does port have a state when there is no link on it?
1
How does STP calculate the lowest port ID
1
How is the root bridge determined in spanning tree from BPDU perspective?
3
Spanning tree - port roles and status during root bridge election
3
Does a bridge have the three STP timers per port or per bridge (one per bridge)?
2
Spanning tree behaviour - topology change
5
How does STP convergence work?
1
Why do Designated Ports in STP still send BPDUs if the otherside of the link is blocking?
2
In RSTP, where all switches generate their own BPDUs, are they limited to forwarding them only on designated ports? (like in classic STP)