I am trying to understand how packets are routed within the same VLAN. I understand that typically there should be a 1:1 mapping between VLANs and Subnets. However if i deploy the following configuration (shown in below figure), would the host 192.168.0.1 be able to access host 10.0.0.1 without a router in the middle? 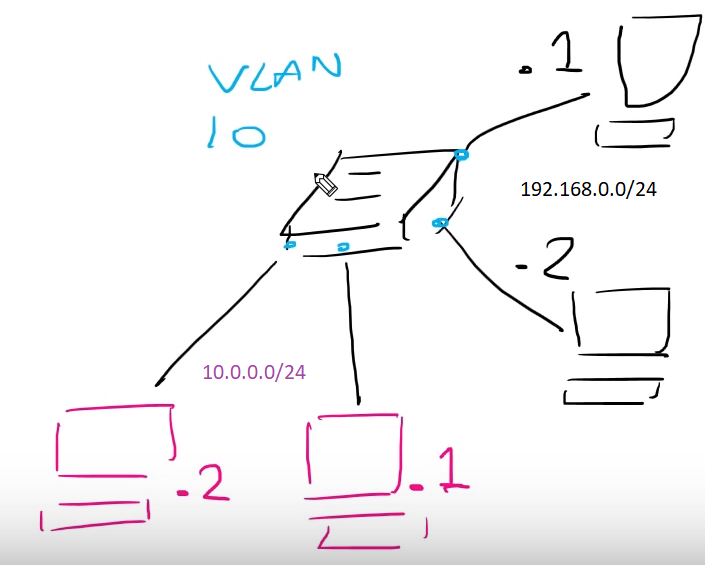 Generally you need a router to route between the subnets. One common configuration is to have one router interface with two IP addresses on it in two different subnets (Cisco calls the second one a “secondary IP”).

Here are some cases where that is useful:

It might be possible to configure the end hosts to talk directly on both vlans, but that can be error prone. Simpler configs are more reliable (one IP per host, one subnet per vlan).

End hosts with multiple IP addresses suffer endless problems because every time they initiate a socket they have to pick a source IP address for that socket: but end hosts don’t have the routing information to make an intelligent decision about which source IP address is optimal.

Note that every dual protocol IPv4/IPv6 network in effect has two different subnets on one vlan. Those subnets cannot talk to each other at all because they are different IP protocols. Modern operating systems incorporate substantial intelligence to decide whether to contact a destination over IPv4 or IPv6 (keyword: “happy eyeballs”).

They can if they know the other subnet is "on the wire" with them. This is where "interface" routes come in. (how to do this is OS specific...)

The first is created by the kernel when an address is assigned to an interface. The second is a static route to the LAN behind a second router. And finally, the third is the secondary subnet on the same LAN.

This sort of overlay is frowned upon in modern networking. This specific network is ~30 years old, so it doesn't do "modern".

No, you need to have a router. So another question may arise - What is the need for a VLAN in the first place? A VLAN also limits the flow of broadcast and unknown unicast traffic (which the switch should flood on all VLAN's interfaces) to reduce unnecessary updates to logically separated entities.

You don't necessarily need a router between subnets, but a layer 3 switch capable of routing. A layer 2 switch does not have the capability of layer 3 routing. In your situation, you could use a "Router on a Stick" configuration, but this is generally not best practice in a production network since all traffic between subnets has to pass through the router, creating a performance bottleneck and more overhead on the router. HP Procurve switches can easily accomplish this and are much more reasonable than many other options, and include a lifetime warranty. Netgear also has some reasonable options but beware of the Layer 2+ switches since they "fake" layer 3 routing and require disabling certain security features if you are utilizing a UTM appliance.

Not the answer you're looking for? Browse other questions tagged routing vlan subnet switching or ask your own question.