Anyone familiar with the TEXNET protocol? I have 35 machines in an industrial setting that are from the late 1990's that use a TEXNET protocol to communicate with a PC system.

Is there anyway to convert this protocol? It uses a 2 wire (Data (-) A & Data (+) B) shielded cable that is daisy chained together with 25 nodes per network. We had adapters that no longer work and I can find only limited information about this protocol. 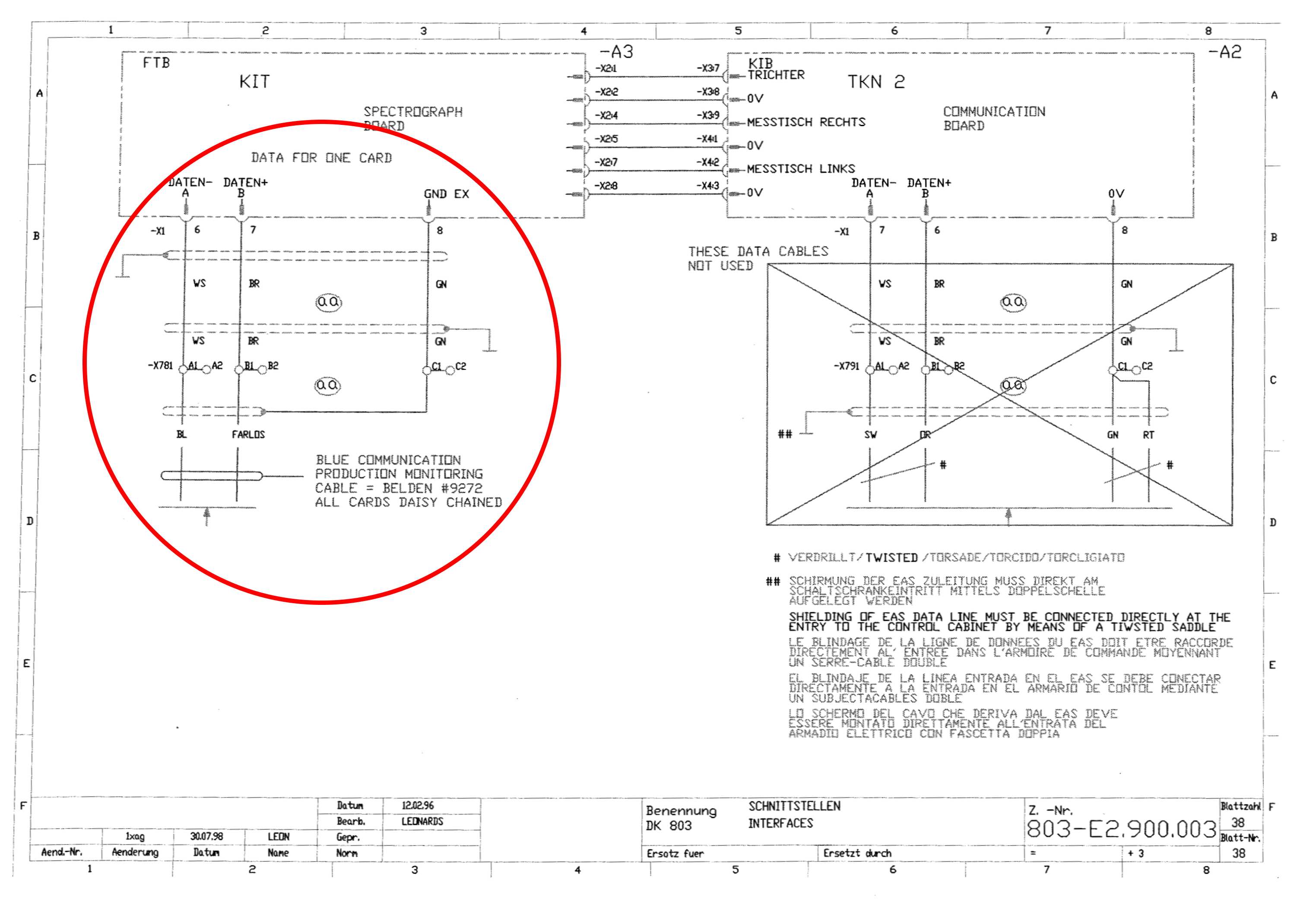 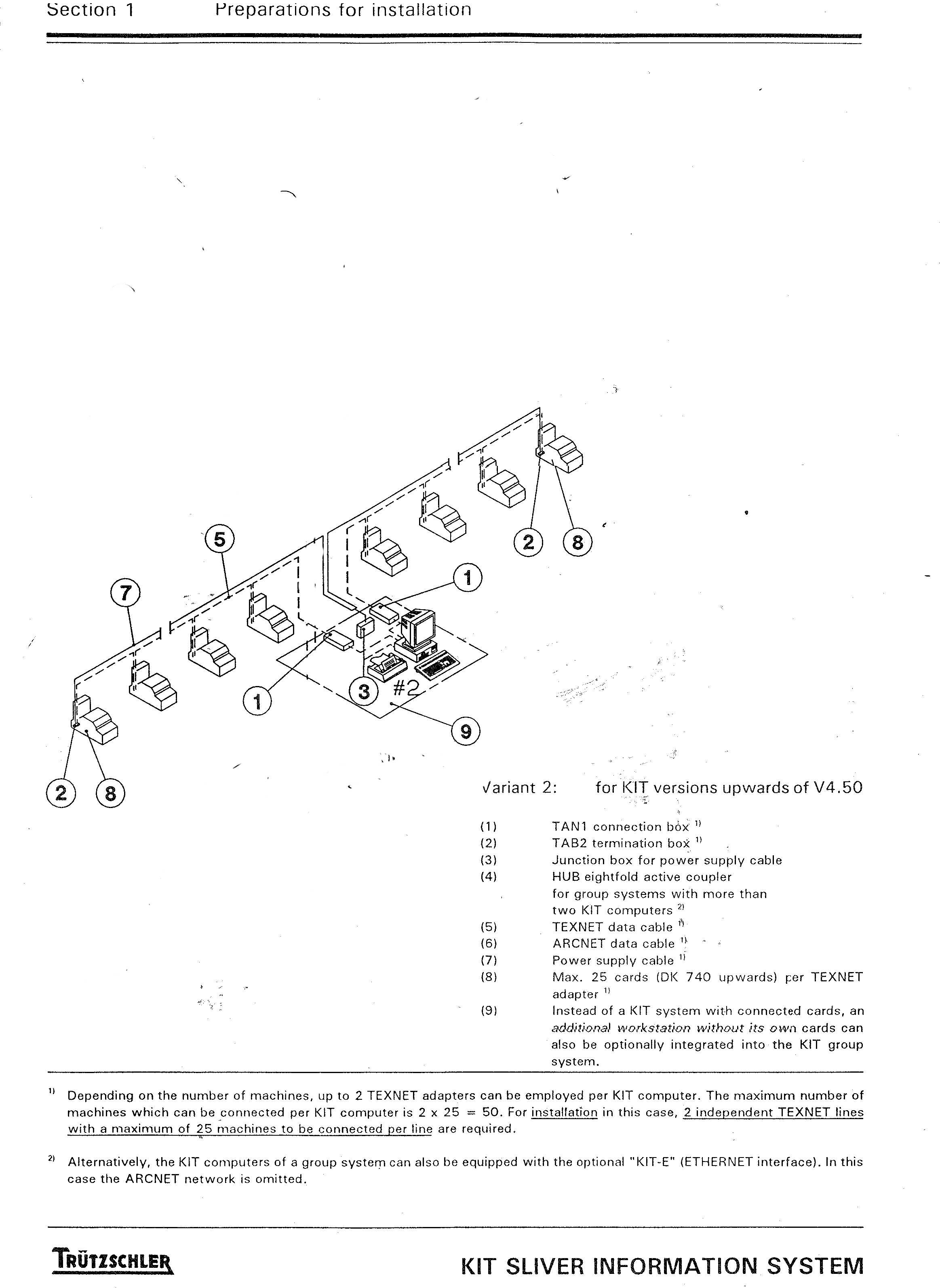 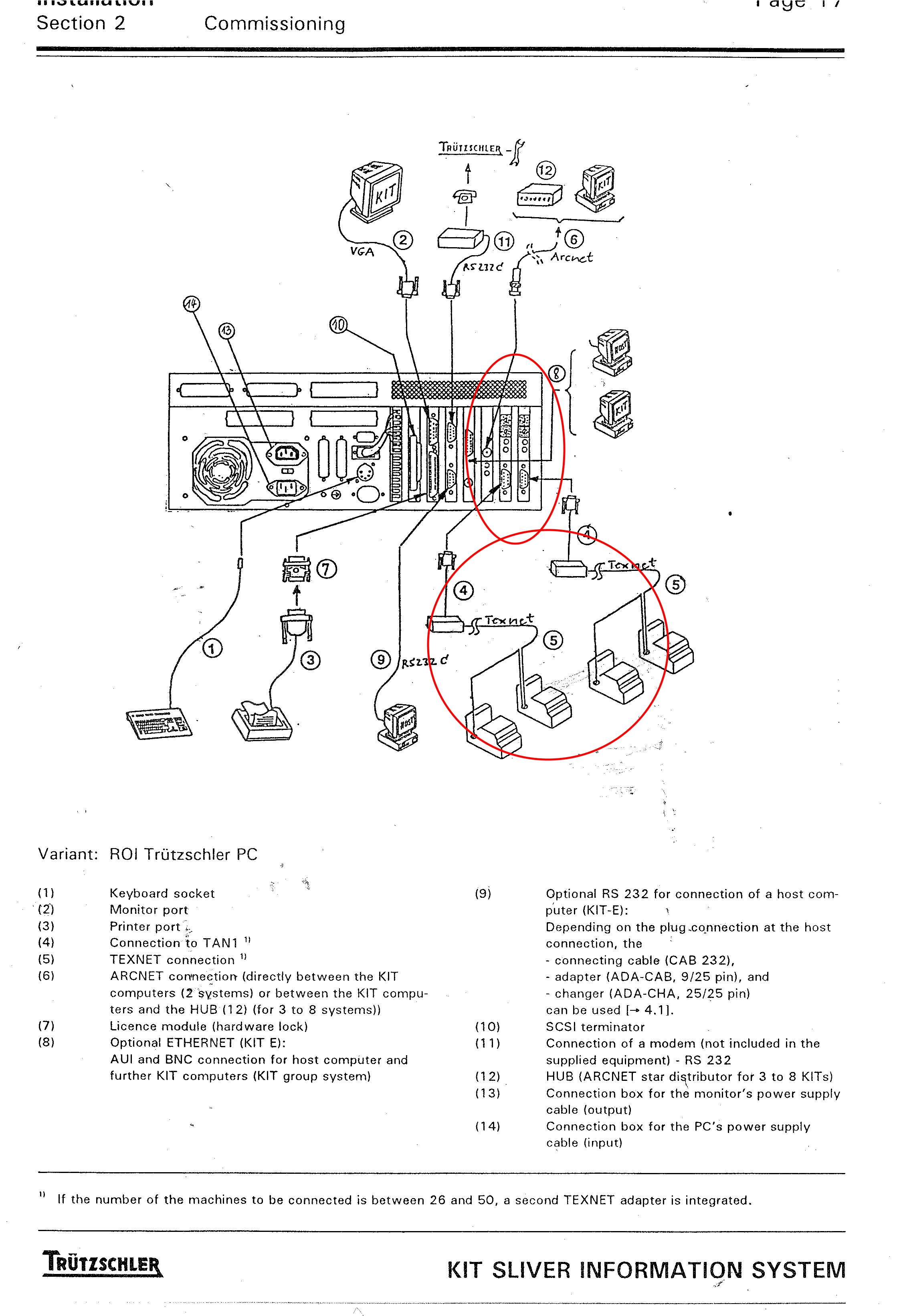 RockfordManRockfordMan
1122 bronze badges
New contributor
RockfordMan is a new contributor to this site. Take care in asking for clarification, commenting, and answering. Check out our Code of Conduct.
add a comment  |

From your diagram 2 the PC connects to one or two "TAN1 connection boxes" (1 in diagram), which each connect to up to 25 "TAB2 termination boxes" *2 in diagram). These then are each on the back of a controlled machine (what exactly are they? DK740 is a carding machine, is that right?)

From diagram 3 it looks as if the PC has a serial port per TAN1.

Thus your choices are:

If TAN1 and TAB2 are just electrical layer, it might be easy to replace with something as simple as RS-485.

It's entirely possible that they are protocol converters, in which case you're in for a fair amount of work. Depending on the protocol it might be posible to replace it with a small dedicated PC running suitable software, but we'd need to find out exactly what's being communicated.

What does the PC say to the carding machines? I'll guess there's software from the manufacturer, but do you know if the communication is simple or complex? Is it perhaps only one direction?

Unlikely Possibility 1, based on your statement it's AX.25

You have the information that the protocol is AX.25, which is a variant of CCITT's X.25 devised by packet radio users for transmitting data over amateur radio. TEXNET is/was a packet radio group based in Texas, hence the name.

Frankly I suspect this isn't correct: AX.25 is an HDLC-like protocol designed for wide-area networking. Although it is possible that Trützschler just adapted the AX.25 for multidrop serial to control the industrial machines. It does sound strange in comparison with possibility 2.

Nevertheless it seems there's enough data on the AX.25 protocol to implement it, and there are web sites claiming software available for Linux. But the protocol is complex enough you'd have to look at the signals to figure out exactly the addressing used and similar, if documentation is as you say unavailable.

More likely Possibility 2, based on the cable Belden 9272

Perhaps "TEXNET" was just a supplier's name for "Textiles Network", as the machines are to do with textiles.

The first drawing shows the cable connecting them to be Belden 9272, a 78Ω twinax cable, typically used for MIL-STD-1553 networking.

Is this your cable?

1553 is a much simpler protocol designed as a control network for local area networks in rugged environments like planes. It's notable that 1553 allows 32 stations on a bus (running at 1 Mbit/sec) which matches closely the 25-machine limit in the diagrams. It would be quite an obvious way to control a pile of machines in a factory, even if pretty obscure by modern standards.

If it's this, that's great news because there are still suppliers for this, including those who make 1553-ethernet convertors of various kind. However, it's quite possible that all the equipment is military-grade with military-pricing.

If the TAN1 and TAB2 are for 1553, they are more likely to be just electrical and framing, with the packet details coming from the PC. This is good because there are lots of ways to deal with this. For example, it appears you might be able to simply replace it with RS-485 which would be much cheaper and conventional for an industrial network. As the spec is pretty detailed, you'd be able to get it right all the way to the manchester encoding. This could be done in a PC or some other very small hardware, but that would be for a different stack exchange.

The Wikipedia article is very good; also scavenged up some old documents.

You definitely have some research to do if you want to make it go. Frankly it looks fun, but that's not always economic. It all depends on the value of the old carding machines: though if you've got 35 of these that sounds like basically a whole factory, so the value would be high.

The place to start is to look closely at the TAN1 and TAB2 boxes.

Of course, the manufacturer may well be able to help, though they might be just interested in getting you to upgrade.

Not the answer you're looking for? Browse other questions tagged network or ask your own question.