What does the BGP protocol consider when determining the best path?

What does BGP protocol consider when determining the best path? Why is it considered the slower than interior routing protocols like RIP, OSPF, etc?

What does BGP protocol consider when determining the best path?

Below is a crude cheat sheet diagram of the best path selection attributes BGP evaluates. 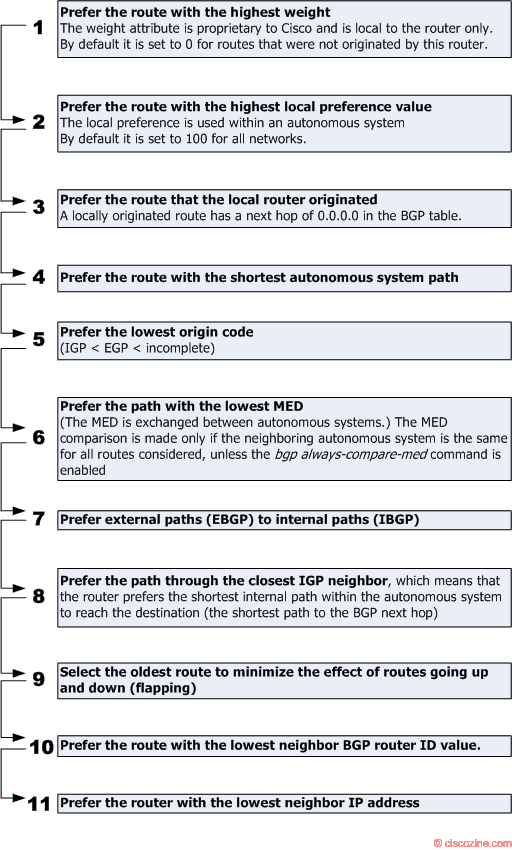 Why is it considered the slower than interior routing protocols like RIP, OSPF, etc?

It’s a bit unfair to say BGP is slow since it is a fully-connected protocol. It’s trying to plot paths over what is, at the abstract level, a hypercube. The number of logical paths is therefore very, very large.

BGP is also a rather complex protocol. BGP4+ has to handle all manner of objects. Worse, because it’s an evolving protocol, it can’t compactify in any way. Everything that was supported has to still be supported and still behave in the same way, which means that there are going to be situations where the same thing can be expressed in different ways. BGP4+ has to know about all of that.

Third, people abused IPv4 chronically, and still do. Any given IP address can be anywhere in the network, CIDR is still a relatively recent idea. That means you can’t take any shortcuts.

OSPFv2 and v3, by comparison, are trying to deal with much simpler problems. For a start, they’re specialized and therefore v3 could shuck everything that didn’t apply. They’re also not working with hypercubes. Because of this, it doesn’t even matter that people abuse network addressing, as far less data has to be digested to cope with that.

It's almost as if comparing trucks (BGP) with race cars (RIP & OSPF).

BGP is built not for the speed of convergence, but for carrying a vast amount of information that other protocols cannot. The amount of policy-based route tuning you can do with BGP is enormous.

In general deployments, OSPF is used to pave the path between two subnets and on top of that fast converging network maintained by OSPF, we have BGP that carries some very detailed information about the subnets being connected. (MPLS VPNs)

Another would be connecting two different management entities (network domains). An enterprise connecting with an ISP, for example. An enterprise may use OSPF in their network to go with the fast convergence and then use BGP to send specific information of their subnets to connect with other networks elsewhere.

BGP has a rich set of attributes, and it uses those for its [complex] path selection algorithm. RFC 4271, A Border Gateway Protocol 4 (BGP-4) has the official algorithm, but some vendors have enhanced the algorithm. For example, Cisco has added the Weight attribute and commands to alter the original algorithm. See BGP Best Path Selection Algorithm:

BGP assigns the first valid path as the current best path. BGP then compares the best path with the next path in the list, until BGP reaches the end of the list of valid paths. This list provides the rules that are used to determine the best path:

15
Why does BGP RR only reflect the best path?
5
What is the difference between distance vector protocol and path vector protocol
3
What information does AS PATH contain in this case?
8
BGP - how does IGP know the right route?
17
In which OSI/TCP-IP model layers do BGP, RIP protocols belong?
0
How to add new daemon on Quagga Routing Suite?
1
Cisco BGP synchronization not taking effect
6
What considerations should be made when determining whether to use the BGP "network" command vs Redistribution?
0
BGP best path algorithm throttling?
1
BGP Best Path Selection Algorithm