Can someone please explain how looping problem is transient in case of link state routing, but is persistent in distance vector routing.(maybe with a nice example) Thanks in advance! :)

Can someone please explain how looping problem is transient in case of link state routing, but is persistent in distance vector routing.(maybe with a nice example) Thanks in advance! :)

The short answer is that loops will persist until the metrics reach infinity (the maximum number of routers that a packet can traverse) in distance-vector routing but the loop will disappear as soon as the new network topology is flooded to all the routers within the routing area in link-state routing.

How a routing loop can form:

For example, in the network given below, node A is transmitting data to node C via node B. If the link between nodes B and C goes down and B has not yet informed node A about the breakage, node A transmits the data to node B assuming that the link A-B-C is operational and of lowest cost. Node B knows of the broken link and tries to reach node C via node A, thus sending the original data back to node A. Furthermore, node A receives the data that it originated back from node B and consults its routing table. Node A's routing table will say that it can reach node C via node B (because it still has not been informed of the break) thus sending its data back to node B creating an infinite loop. 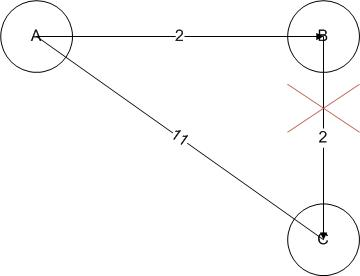 How a routing loop can persist:

Consider now what happens if both the link from A to C and the link from B to C vanish at the same time (this can happen if node C has crashed). A believes that C is still reachable through B, and B believes that C is reachable through A. In a simple reachability protocol, such as EGP, the routing loop will persist forever. In a naive distance-vector protocol, such as the routing information protocol, the loop will persist until the metrics for C reach infinity (the maximum number of routers that a packet can traverse in RIP is 15. The value 16 is considered infinity and the packet is discarded).

In a link-state routing protocol, such as OSPF or IS-IS, a routing loop disappears as soon as the new network topology is flooded to all the routers within the routing area. Assuming a sufficiently reliable network, this happens within a few seconds. Newer distance-vector routing protocols (BGP, EIGRP, DSDV, Babel) have built-in loop prevention: they use algorithms that assure that routing loops can never happen, not even transiently. Older routing protocols (RIP) do not implement the newest forms of loop prevention and only implement mitigations such as split-horizon, route poisoning, hold-down timer, Trigger Update and Define maximum hops.

Not the answer you're looking for? Browse other questions tagged routing ospf rip or ask your own question.