Why and how are Ethernet Vlans tagged?

If you have more than one VLAN on a port (a "trunk port"), you need some way to tell which packet belongs to which VLAN on the other end. To do this you are "tagging" a packet with a VLAN tag (or VLAN header if you like). In reality a VLAN tag is inserted in the Ethernet frame like this:

The 802.1Q (dot1q, VLAN) tag contains a VLAN-ID and other things explained in the 802.1Q Standard. The first 16 bits contain the "Tag Protocol Identifier" (TPID) which is 8100. This also doubles as the EtherType 0x8100 for devices that don't understand VLANs.

So a "tagged" packet contains the VLAN information in the Ethernet frame while an "untagged" packet doesn't. A typical use case would be if you have one port from a router to a switch which multiple customers are attached to: 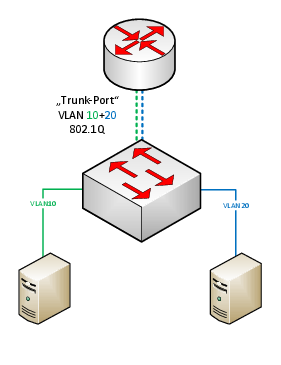 In this example customer "Green" has VLAN 10 and Customer "Blue" has VLAN 20. The ports between switch and customers are "untagged" meaning for the customer the arriving packet is just a normal Ethernet packet.

The port between router and switch is configured as a trunk port so that both router and switch know which packet belongs to which customer VLAN. On that port the Ethernet frames are tagged with the 802.1Q tag.

The above answers are quite technical. Think of it this way:

In fact VLANs and tagging is nothing more than a logical separation of networks in contrast to a physical one. Now what does that mean?

If there were no VLANs you would need one switch for each broadcast domain. Imagine the cabling involved and also the potential number of NICs required at the hosts. So first, VLANs allow you to have multiple independent layer 2 constructs within the same switch.

Since now you can have multiple networks on each link/port you have to somehow be able to distinguish which packet belongs to which network. That's why they are tagged. If a port carries more than one VLAN it's also usually called a trunk. (for n>1 VLANs, at least n-1 VLANs have to be tagged and there can be one untagged VLAN, the native VLAN)

Generally you have to distinguish packets at port ingress (incoming "from the cable") and egress (outgoing "into the cable"):

What happens inside the switch

A switch has an FDB (Forwarding DataBase) which

Hope this clears the confusion a little bit ;-)

The defacto VLAN encapsulation protocol is 802.1Q (dot1.q). Its most basic function is to retain VLANs across switches. Since VLANs are locally significant to the switch, you have to tag a frame going to near-by switches to let them know what logical grouping that frame belongs to.

By default the Native VLAN is the default VLAN, a trunk port can carry multiple VLANs to route traffic to the router or a switch. VLAN is a layer 2 protocol and it segments a layer 2 network, they can only communicate in a Layer 3 device such as a router or a layer 3 switch.

Native VLAN is used so untagged frames can communicate without the need of a router. It is best security practice to change default/native VLAN to another VLAN using this command: switchport trunk native vlan .

Not the answer you're looking for? Browse other questions tagged vlan ethernet or ask your own question.

2
Tagged vs Untagged Question
1
Why do we use vlan tagged port?
2
How a packet processor detects if vlan tag is present in Ethernet header or not?
0
Where are VLAN tagged packets?
4
necessary and sufficient condition for vlans to communicate together
4
changing native vlan the mngmt vlan should be seperate, right or wrong? And, which device ip default gateway to use on access Distro core
2
Multiple VLAN setup questions
1
How does switch treat ingress tagged packet?
0
How can i make every network on this topology speak together?

3
VLAN membership - Tagged and Untagged
4
Aren't Switch Access ports tagged?
2
Is there a way to distinguish tagged vs. untagged ethernet frames?
3
Pinging And Accessing Computers On 1 Switch with 2 VLANs
2
When are Native VLANs used? Are there times when a Native VLAN will never be used?
0
Setting all switchports as tagged for 200 x VLANs?
2
What is the purpose of native VLAN on a trunk link?
0
Why some situations, PC can connected to trunk port and work fine?