I am currently studying the textbook Computer Networking -- A Top-Down Approach (7th Edition) by Kurose and Ross. In a chapter on Home Access: DSL, Cable, FTTH, Dial-Up, and Satellite, the authors say the following:

There are several competing technologies for optical distribution from the CO to the homes. The simplest optical distribution network is called direct fibre, with one fibre leaving the CO for each home. More commonly, each fibre leaving the central office is actually shared by many homes; it is not until the finer gets relatively close to the homes that it is split into individual customer-specific fibres. There are two competing optical-distribution network architectures that perform this splitting: active optical networks (AONs) and passive optical networks (PONs). AON is essentially switched Ethernet, which is discussed in Chapter 6.

Here, we briefly discuss PON, which is used in Verizon's FIOS service. Figure 1.7 shows FTTH using the PON distribution architecture. Each home has an optical network terminator (ONT), which is connected by dedicated optical fibre to a neighborhood splitter. The splitter combines a number of homes (typically less than 100) onto a single, shared optical fibre, which connects to an optical line terminator (OLT) in the telco's CO. The OLT, proving conversion between optical and electrical signals, connects to the internet via a telco router. In the home, users connect a home router (typically a wireless router) to the ONT and access the Internet via this home router. In the PON architecture, all packets sent from OLT to the splitter are replicated at the splitter (similar to a cable head end). 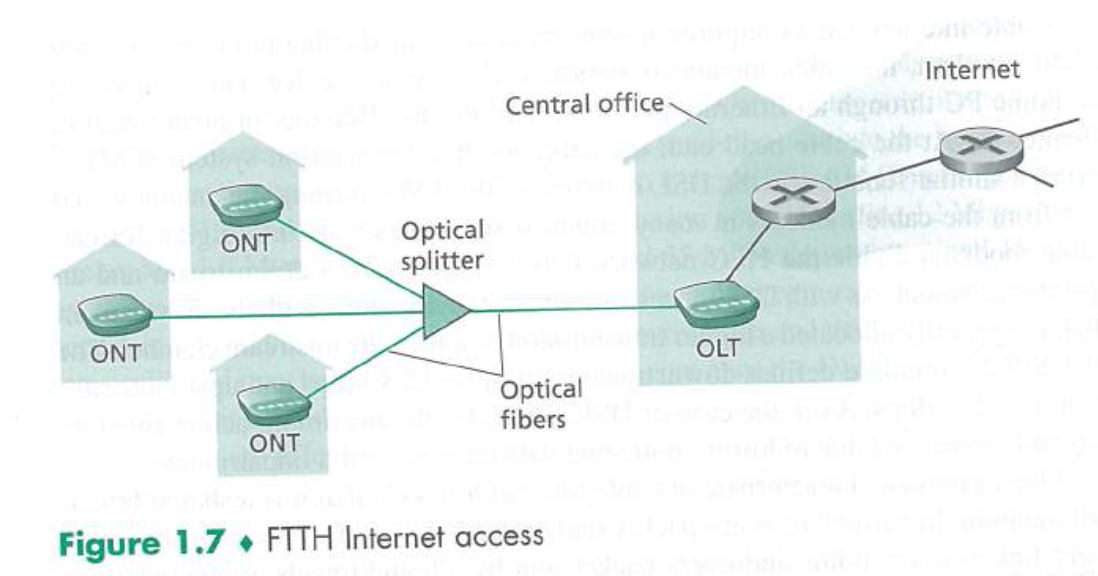 It is this part that I found interesting:

In the PON architecture, all packets sent from OLT to the splitter are replicated at the splitter (similar to a cable head end).

This is my first exposure to computer networking, so please excuse the elementary nature of my questions.

So the incoming packets arrive at the OLT, and then move onto the optical splitter, where they are first each copied before being sent to the addressed ONT? Is it not inefficient to copy the packets in this way? Would it not be more efficient for the packets to just move directly to the addressed ONT, rather than having to be copied at the optical splitter? And I also wonder if there are encryption issues here: If the packets are encrypted, then how can they be copied precisely? Does copying the packets not necessitate knowing the contents, and therefore breaking the encryption?

I would greatly appreciate it if people would please take the time to clarify these points.

Technically, there's no copying to the various strands.

With PON, the splitter is a passive, unpowered unit that optically splits the downstream light into multiple, weaker rays. Each 1:2 split attenuates the signal by (at least) 3 dB. Up to 1:64 splits are common, depending on overall fiber length and power budget, up to 1:256 is possible. It's a bit like connecting electric wires together.

The upstream signals are combined in the same way, just in reverse. Since different upstream signals would collide with each other, each ONT has its own timeslot for transmitting (time-division multiplex), as allotted by the OLT.

If the packets are encrypted, then how can they be copied precisely?

Even with active (switched) distribution, encrypted payloads are switched/bridged or even flooded as they are - no need to decrypt and re-encrypt, as encryption is only present at higher layers. Basically, AON distributes at the data link layer while PON works directly in the physical layer's medium downstream.

20
Where to cross RX/TX line in fibre optical cabling
4
ELI5 – basic questions regarding MMF
1
Purpose of fibre optic splitters?
3
Get the raw binary stream from an optical fiber