my topology is shown below: 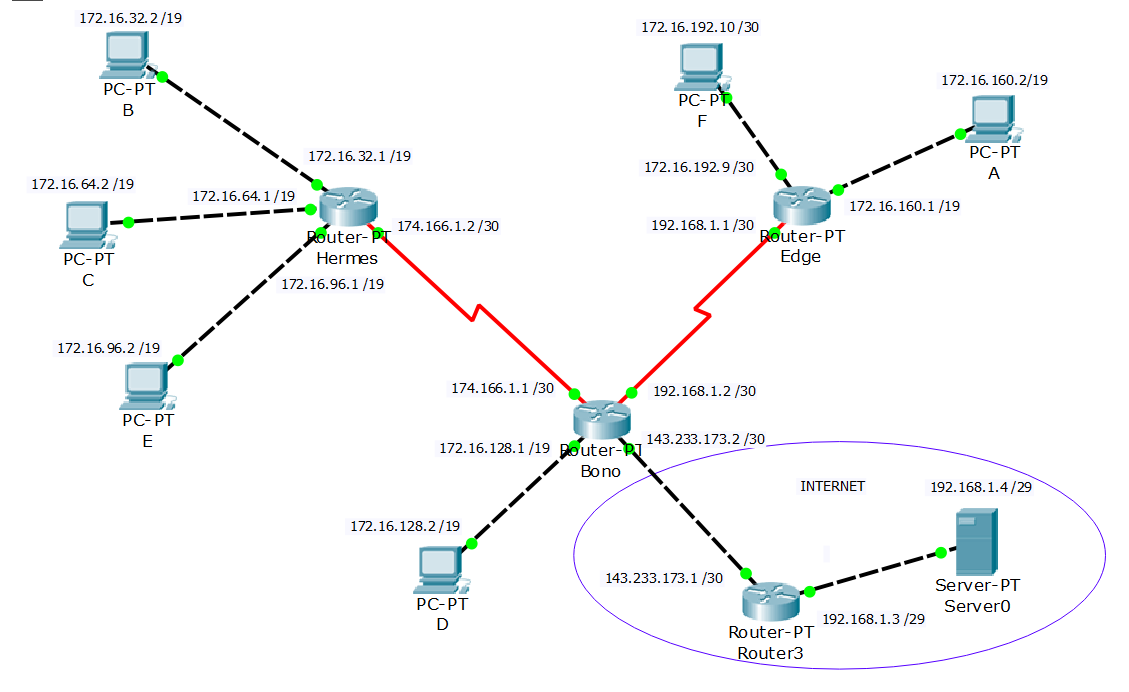 I would like the networks that are connected to Hermes-Router to be accessible from all the other stations only when I use ping and traceroute. I tried to do this using an ACL(access-list 122) on the se2/0 interface of Bono-Router(this is the serial interface that connects Hermes and Bono). The execution of the "show running-config" command on the Bono-Router is shown below:

After applying access-list 122 to se2/0 of Bono-Router, I successfully used ping and traceroute from PC-E to PC-A and from PC-A to PC-E. Unfortunately when I'm trying to access the webpage of Server0 from PC-E using its web browser I get the "Request Time Out" message shown below: 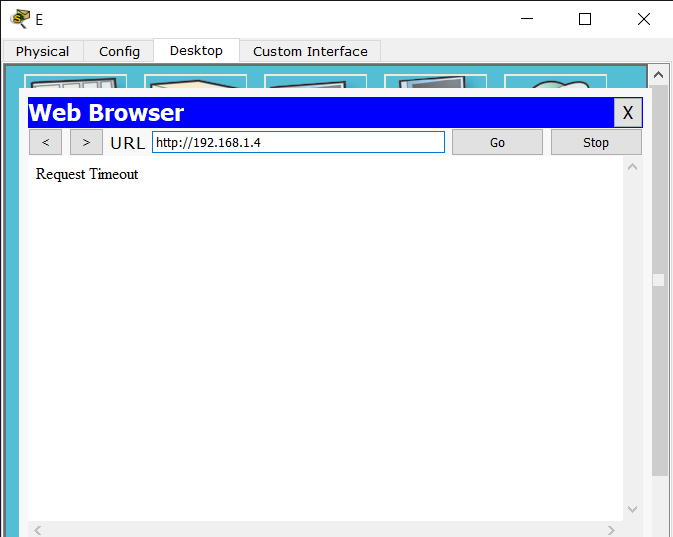 I would appreciated if someone could share his idea about this problem with me. Thank you all in advance for your help!!!

First, I'd prefer to apply the ACL inbound on Hermes rather than outbound on Bono. That way "the network protects itself" rather than "I depend on the upstream network to defend this network". But that's just my preference. Your ACL at least blocks traffic before it fills up that serial line.

Second, there are several different implementations of traceroute. The unix and mac variant uses UDP outbound to a high UDP port, and relies on ICMP error messages coming in the other way (on my mac the ports start at 33435 and increase. Per "TCP IP Illustrated Volume 1" by Richard Stevens that is the traditional Unix implementation). Since your traceroute succeeds with an icmp permit, it must be a variant using icmp (I believe windows traceroute uses icmp, I don't have a packet capture so I can't see the exact message used).

Note that the last ICMP reply might be "ICMP destination port unreachable" rather than time exceeded.

Your second requirement is to permit icmp inbound. I don't like allowing reconnaissance of my network, but if that's your requirement it makes that part of the ACL easy. I'd prefer to allow ICMP responses in but block ICMP echo requests.

That makes your ACL as follows: (you can apply this outbound on bono or inbound on hermes)

Note that "range 33435 33535" uses an "expensive" LOU TCAM on high-end hardware-forwarding routers. You typically get only 30-50 of those per high-end router. So use them sparingly for important rules (such as minimizing ingress udp scanning, as I did here). Reusing the exact same range in different ACLs typically allows reuse of the same TCAM.

Even after all this, your network will not be "operational". At the very least you need to permit UDP replies from your DNS server (you already permit tcp replies thanks to the "permit tcp any any established").

EDIT: Taking off my network engineer hat and putting on my information security hat, I'd like you to decide which network you want to protect. If you are protecting the Hermes network, don't let the internet ping or traceroute inbound. Pinging and tracerouting outbound (and allowing minimal replies) makes more sense.

You need to modify access-list 122 to also allow web traffic from server0.

This means the only traffic that will be sent from Bono to Hermes is ICMP and HTTP replies. That may not be exactly what you want. In that case, you will need to add more lines to the access list.

Not the answer you're looking for? Browse other questions tagged ping acl icmp traceroute or ask your own question.

7
How to configure OOB access via IP
3
Why “Deny all” statement in ACL is not working?
1
ACL permit and deny to default gateway OSPF routing
3
Data-packets, sent to a router, are treated differently based on their origin: clarification needed
0
Difference in number of hops calculated using ping vs traceroute
2
R2 and R3 cannot ping each other
1
how to deny ping from one direction but not the other using Access-list
0
traceroute and ping behaviour through cisco router
0
Why I can't ping my switch Vlan99?