How is the term “fabric” defined in networking?

I know this is fundamental and I can find out in Google but so many people differ themselves when they talk about network "fabric". Kindly elaborate on this ?

As infra has laid out so picturesquely, a fabric is a network where everything is interconnected. There is no rigid, official definition, but very often when talking about a fabric it is implied that

Pretty obviously, that isn't really possible on the physical layer for a non-trivial network, so fabric is usually applied to the data-link-layer structure (L2) of a network (or some part of it). Sometimes it is also applied to a network-layer topology (L3) when it is especially high-bandwidth, low-latency and redundant.

A simple fabric could be a small SAN with Fibre Channel or iSCSI that uses two switches and redundant multipathing between hosts and storage arrays. A complex fabric could be a multi-site, distributed core network connected by direct fiber.

I think you have an Idea about Fabric. It means clothes. Now just think how cloth is made with yarn. Everything is inter-connected. 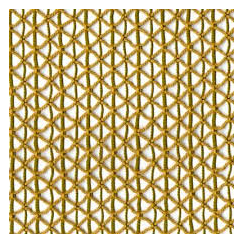 See this Image. You will get the idea.

Not the answer you're looking for? Browse other questions tagged networking terminology network-theory or ask your own question.

5
What is the difference between data rate and latency?
1
Circuit Switching and Packet Switching confusion !
6
What precisely is a link?
1
What's the technology of bind MAC address with IP address, for solving iP conflict issue?
1
is there any limit/role for `syn` initial number and `seq` number of TCP three-way handshake?