Will IP cameras increase the traffic in our local network?

We need to place 16 IP cameras (4MP) to monitor a warehouse, where all these cameras will be handled by a CCTV. We have 2 options:

Is option 2 a better plan to follow, in order to reduce bandwidth in our network where PCs are connected? Or the traffic that cameras are sending to the CCTV device will not increase significantly the bandwidth?

*Switches are gigabits (are managed,the wires CAT6 and IP cameras have 4MP resolution . The CCTV has a single port in order to be connected to the network

In the switch there are 5 office PC, which have access to a local NAS disk for shared files (excel, word, pdf most common files) and 3 Access Point for 20 wireless devices (mobiles, tablets).

Specs of the switch:

We can't tell you if that is acceptable or not -- it depends on whatever else you have on that switch.

At the low end of the range, that bandwidth used isn't significant. At the high end it also probably isn't, but might be.

You will have to trade off video quality for bandwidth, but only you can determine whether the trade off is acceptable.

16 Cameras at 4MP resolution, running at 15 fps gives the following:

Also remember that even if you're doing motion-only recording, the cameras will constantly be sending a stream to the recording NVR. Also, any live monitors will duplicate the bandwidth from the NVR to the client if they're running over the network.

As a side note: Consider running the cameras on H264/H265 if at all possible, as you can see this will save you quite a bit of bandwidth compared to MJPEG. The network is however seldom the bottleneck with IP cameras, it's usually the recording device CPU, NICs, or disc system that gives out first.

Option B also has the disadvantage of directing traffic from viewing PCs through the router, which might quickly become saturated as routers are quite bad at passing traffic compared to switches, especially the lower end ones.

I run setup a on an 60 camera setup. I still have the camera and recorder in a different vlan then client computers. The main thing I would recommend from a security perspective is use segmentation of your network.

We used to have setup B in our warehouse but needing some many extra switches and uplinks just is not necessary since if you monitor the interface loads there's not much data as you think.

This is the server uplink running 60 camera to milestone server

1) You are not routing. The router is irrelevant and distracting. Your B network is really like this: 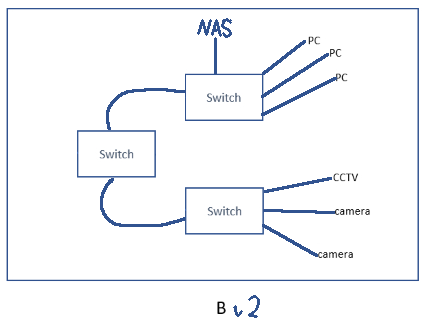 All the direct traffic between camera and cctv device will be switched by the bottom switch only. Good

Traffic from a PC to/from the CCTV box will pass through three switches each way. Okay but not optimal.

Traffic to/from the internet will pass through two switches (the middle one being internal to the box you call a router) This is unavoidable really.

The only change I'd make would be to pick your best switch and use that as the top switch, call it "the core switch" and have a link out to each of the other two switches. I doubt your router's switch supports trunking or bonds, and may not support vlans.

The only traffic that will go over the entire network is broadcast traffic like ARP. And for a small enough network like this, will be fine. If you had a thousand devices on the same network, broadcast traffic may be an issue.

Depending on the needs of your organisation, there are some small downsides:

Yes the hostname is donkey, no I don't remember why.

The flatline is the overnight low - where each camera is in IR mode and sending a lower bitrate. During the day, they're seeing more colour, and more movement.

Of course if you have 10 PC computers all watching 10 cameras through the DVR at once, then this number grows pretty quick, 10 *10Mbit (outbound) + 10 Mbit (inbound) is 110 Mbit/sec which is roughly 11% of what a gigabit port can theoretically do, probably more like 15-20%.

So you have quite a lot of capacity for cameras.

Not the answer you're looking for? Browse other questions tagged switching topology or ask your own question.