Clarification on when routers encapsulate and decapsulate packets

I'm an application developer working on getting a working knowledge of network engineering, so basically a newbie. I've been trying to figure out exactly when routers decapsulate frames into packets and encapsulate packets into frames. I found Does a router send frames or packets?, and I'm still having difficulty getting clear on just when packets get encapsulated and decapsulated during the process of sending them from a source to a destination.

Ron Maupin answers the question I linked in this way:

Based on the beginning of this answer, I'm seeing that a router strips off the layer-2 frame, and then routes the packet. That suggests that routers route packets rather than frames. But then the answer says "at the next interface, it must build a new frame for the packet," and I'm having trouble reconciling that statement with the beginning one.

So, I'm still not entirely clear after reading Ron's answer whether routers send frames or "naked" packets out on the internet. It seems to me that it would be simpler to decapsulate any frames that are sent out on the internet, leave them as "naked" packets while they are being passed from router to router (presumably routers use IP to figure out where to send the packet, and as such don't need a frame to move it along), and then, when the packet hits the router that is connected to the destination, that router re-encapuslates the packet in the frame type consistent with whatever layer-2 protocol it uses.

Is that what's actually happening, or do routers have to encapsulate packets into frames before forwarding them to other routers, and as such have to know what type of frame each router that it can send to needs? (That doesn't seem very scalable to me.)

Edit: this is the sort of thing that's confusing me, from the Wikipedia article on the Data-Link layer:

The data link layer is concerned with local delivery of frames between nodes on the same level of the network. Data-link frames, as these protocol data units are called, do not cross the boundaries of a local area network. Inter-network routing and global addressing are higher-layer functions, allowing data-link protocols to focus on local delivery, addressing, and media arbitration.

This comes pretty close to asserting, with no room for interpretation, that L2 involvement is limited to LAN boundaries, and is not a part of sending packets out on the internet.

Below is a diagram of an IPv4 packet encapsulated within an Ethernet frame. The Ethernet (layer-2) portions are shaded blue. The IPv4 header (layer-3) is shaded red. The payload (above layer-3) is white.

A router can function on the Internet, without understanding those legacy protocols, because the layer-2 portion of the packet (shaded blue) is replaced by each router that forwards the packet. The blue part can even be replaced with an entirely different structure for a different layer-2 protocol.

As the packet is forwarded from its source, across the Internet, to its destination, the red part remains almost the same (with some caveats.) All IP routers handle the red part identically. That's what makes them all compatible with each-other, and with our PCs and other devices; they all know how to work with the red part of the packet, and they're not even aware that the packet might have passed through layer-2 protocols they're unfamiliar with. This abstraction is deliberate, and allows IP networks to be constructed atop various underlying protocols.

When does this happen

Your original question is about when, in the routing process, this happens. The answer is, the layer-2 header is the first thing examined about an arriving packet. Generally, for unicast traffic, if the Destination MAC Address of an Ethernet frame isn't a MAC address owned by the router, it can ignore that packet with no further processing.

When is a new layer-2 header constructed for forwarding the packet to the next router or host? That happens after a routing decision has been made. That routing process can be complex; see the below image for an example of how Linux's iptables system does it. But at the very end, the out step, that's when all information needed to assemble the new packet is known. The process of creating the new packet is sometimes called the L2 Rewrite process, because most of what it does is replace the layer-2 header. 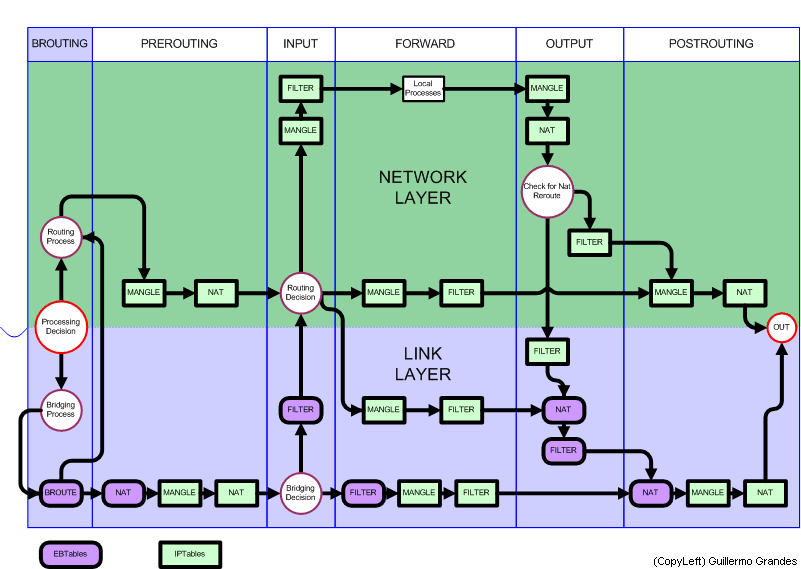 Basically, you can't send raw or naked packets out of an interface.

Data units require framing for transport: marking the start and end of data, and directing that data chunk through the network, essentially.

So, a packet needs to be wrapped or encapsulated by a frame for L2 transport. That frame is used throughout the L2 network (e.g. across switches) but needs to be removed by an L3 entity (router) to recover the actual packet. When the packet is forwarded out another interface is needs to be encapsulated again, depending on that L2 network.

That mechanism allows you to combine a multitude of different and incompatible L2 protocols like Ethernet, Wi-Fi, VDSL, DOCSIS, LTE, or even serial ports into a larger L3 network.

A very similar thing happens between the data link and the physical layer. Within an L2 network, like Ethernet, it allows you to combine a range of different media and speeds. The very same frame may be encoded and decoded in 10BASE-T, 1000BASE-SX, 10GBASE-LR along its path.

The general idea is that each layer has a certain function but doesn't know/care much about the others. L3 does the routing across vast distances, but can't actually move data(!). L2 manages the flows in the local, limited-size network and does the actual packetizing - but it still can't physically move data. L1 knows very little about all that, but it's the one actually moving the bits around.

Routers route data from one network to another. So routers have physical connections (interfaces) to two or more networks. If you only have two networks, you only need one router.

The router strips off the Ethernet frame, and based on the destination IP address, decides which interface to forward the packet out of (in this particular case, there's only one other interface, but a router can have several interfaces on different networks). Since the packet has to go to H2 on the token ring network, the router encapsulates the packet in a token ring frame and sends it to H2.

Not the answer you're looking for? Browse other questions tagged routing ip ethernet layer2 layer3 or ask your own question.

8
How is IEEE 802.1ad (aka VLAN Tagging, QinQ) valid, when the packets are too large?
1
How do routers traverse packets to their destination?
1
Understanding Broadcast address
4
Need of routers and IP addresses
6
Need help understanding how packets travel across the internet
5
Does a router send frames or packets?
0
Routing in Wireless Ad-Hoc Networks
3
Bit stuffing and Error correction combined
1
Are all packets addressed with the MAC address of the router as they leave the machine?