Do I need STP enabled on all switches in a loop?

I have a network architecture where each of my N switches is connected to two others, making it a perfect loop. For example see the diagram below: 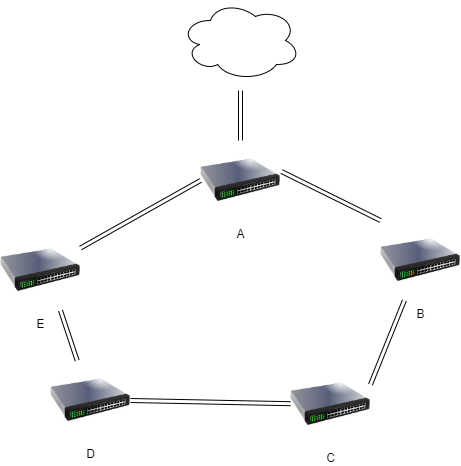 I know that in order to avoid broadcast storms, I should enable STP/RSTP on my switches. However, it is difficult for me to enable it on all switches in my architecture as they do not all support it.

Am I able to only enable STP on a single switch in this case? In the case of the diagram, on switch A. I would like the network to function without issue and for it to be resilient to any one link going down. I am not so concerned about a loss in performance. If a switch needs to send packets across more hops than it really needs to, that is ok.

Generally, a ring is a bad design for Ethernet switches. STP blocks one of the ring links, forming a chain. Traffic between switches on opposite sides need to cross the whole chain, potentially causing link congestion. In your diagram with A being the root switch, C-to-D traffic would require four L2 hops.

With 802.1D-compliant switches/bridges, STP BPDUs are transmitted between any two link partners. Each switch needs to make an informed decision which ports are redundant and need to be blocked. If only one switch in your chain doesn't support STP, the bridge loop goes undetected - STP won't/can't block the looping port(s) and the network will die a horrible death in a broadcast storm.

Switches not compliant to 802.1D (sadly many simple ones aren't) actually forward BPDUs and become transparent to STP - that way, even a single STP switch (with the rest being dumb ones) would prevent the bridge loop.

HOWEVER, if you ever replaced one of the dumb switches with an 802.1D-compliant one, you'd suddenly have the situation above, where the loop goes undetected and the network dies. Basically, you shouldn't make your network depend on the dumbness of its switches.

So, if you require a resilient network, use the appropriate equipment. Also, don't form rings or chains but build a tree: a center (root) switch which the other switches connect to. If you need redundancy, use two center switches and two uplinks for the others (with RSTP/MSTP, of course).

If all your switches use STP a loop isn't that bad (it's definitely suboptimal, but there are times when you can't get around it), but then you'll need switches with STP support, and with it enabled and properly configured on each switch.

In your case, the switch connecting to the ring to the outside would have to have it's priority set so that it's most certainly gets elected root bridge, which will make sure that every switch has the shortest path to that switch. It's also a very good idea to add a secondary access switch to the ring and tweaking it's priority so that if the root bridge goes down it'll get elected instead of a random switch in the ring.

Another option is to get switches that support a ring protocol, some vendors, especially on the industrial side, have their own proprietary protocols, and I think at least some Aruba switches have one as well.

Not the answer you're looking for? Browse other questions tagged switch spanning-tree ieee-802.1w or ask your own question.

4
Connecting multiple links between switches
1
STP and LAG Problems
6
Should I disable STP on my access ports?
2
What considerations should I need to have in order to configure a RSTP over a PTP wireless network?
1
Fastest way to switch between redundant wireless links
1
RSTP Sync received every 2 minutes after a TC
0
Using MSTP with RSTP
0
RSTP Loop - 24 switches, Max RSTP Diameter and timer adjustments?
0
Non [R]STP switches in LAN ring topology