what's the difference between trailer and padding field in ethernet frame captured by wireshark?

The Ethernet minimum length should be 64 Bytes, so when the data is less than 46B, there would be some extra bytes padding to the end of data, make sure the frame size up to 64B. When I capture the frames less than 64B by Wireshark, it shows "padding" or sometimes "trailer" , so my question is : what's the difference between trailer and padding field in ethernet frame captured by wireshark?

I used to think that padding and trailer were the same thing, but when I saw them appearing in one frame, I was confused. Just like this ↓ 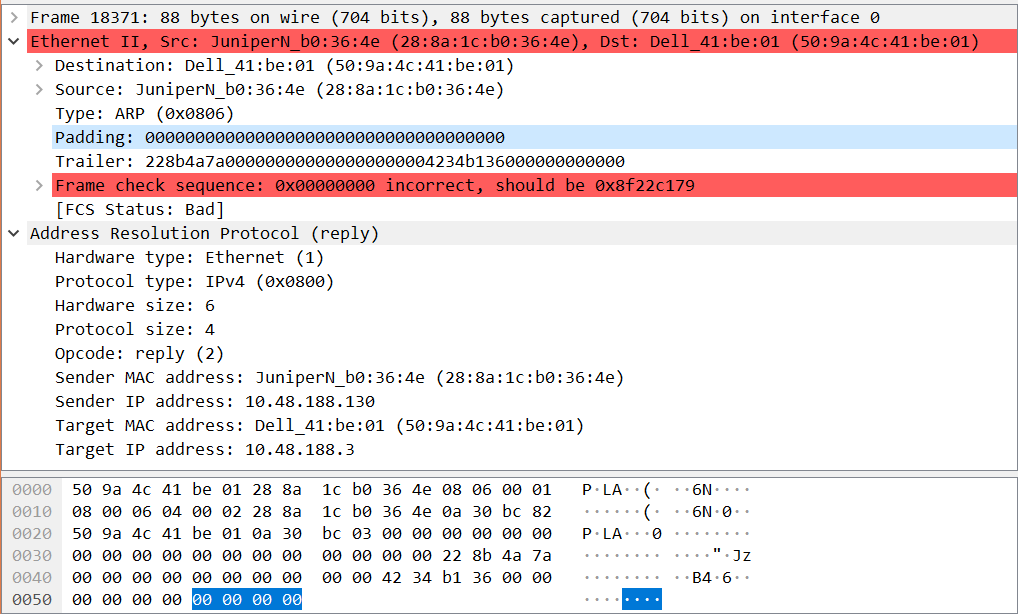 Since the ARP packet size is fixed and smaller than a minimum Ethernet payload, padding needs to be used at all times. Wireshark most often doesn't see the FCS that's closing a received frame[1], so it needs to apply some guesswork as to which bytes might be padding. It calls these excess bytes trailer. Padding might show up on sent frames, although these padding bytes aren't usually visible (since they're only added by the NIC/driver).

[addition for 2nd screenshot]: I'm counting 18 padding bytes which is the exact difference between the ARP packet size (28 bytes) and the minimum Ethernet payload size (46 bytes) - that's padding as required by Ethernet and recognized as such by Wireshark.

The rest is excess data (garbage?) that is trailing the minimum frame, so it's labeled as Trailer. It looks like it starts with the (possibly correct) FCS, followed by some more bytes - potentially metadata misinterpreted by Wireshark, which would also explain the FCS status bad.

You might need to recheck the import options for the dump for Wireshark to make more sense of it.

[1] The real frame end is indicated by the physical layer by just stopping the carrier signal or sending a special symbol (depending on the variant). This isn't visible to the capturing library at any time. The NIC driver just provides a buffer containing bytes, usually also stripped of the FCS.

Not the answer you're looking for? Browse other questions tagged ethernet wireshark or ask your own question.

12
Why can't we find Ethernet checksum in Wireshark?
2
Maximum packet size Ethernet Frame and IP packet
1
UDP Over Ethernet - Where exactly and in what order will the UDP information show up in the payload of my Ethernet frame?
3
Receive order of bits in network packet fields
6
Ethernet padding value
2
What does a "Frame" relate to in the WIreshark packet details pane?
3
How does ethernet understand what is the upper layer? What are the values in Ethernet II field?
1
What all fields is the FCS/CRC in the trailer of the ethernet frame calculated over?
0
Weird Wireshark protocol list (eth:ethertype:ip:data where is the "udp"?)