What is a recommended way (in terms of maintenance, simplicity and failsafe-ness) to essentially run a "ring" of switches, but allowing OSPF to run properly (so equal-cost-path routing can work - in picture, for SW4)?

My setup is as follows: 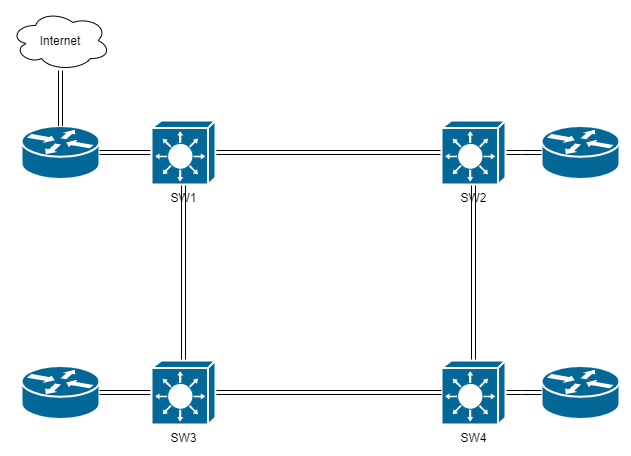 I have tried running MSTP (with a separate VLAN per link), but I don't seem to get it properly to handle the point to point links, and all common examples on the internet is "enterprise" type - run all the VLANs on all the switches.

Is there some other protocol that would suit the setup better? Is there a fundamental design flaw in my thinking? With MSTP, can different switches have different VLANs or is the protocol fundamentally for running all the VLANs over all the switches in a region?

If you have a fully switched ring MSTP/RSTP is required to avoid the otherwise resulting bridge loop. xSTP blocks one of the links, so it can't be used any more. The routers (L3) can only use what the switches (L2) allow them to.

You have two basic choices:

I think you've already tried 1. The trick is to either not use spanning tree if there can't be a bridge loop anyway, or to use multiple instances to make them independent.

Not the answer you're looking for? Browse other questions tagged ospf redundancy ieee-802.1s or ask your own question.