So, to start DH, the two parties need to agree upon a prime number and Generator, correct? How do they do do that without someone listening in?

Where does the loop end/start?

Also, Does it matter if a Man in the middle finds out the prime number and generator combo?

The Prime number and the Generator are not sensitive or secret. Meaning, the two parties can share them over an unsecured medium with no risk.

This article covers how the exchange works, and provides a number calculation example where two parties attain the same shared secret, which is unattainable if you had all the numbers that were shared over the unsecured medium.

Here is the illustration in that article: 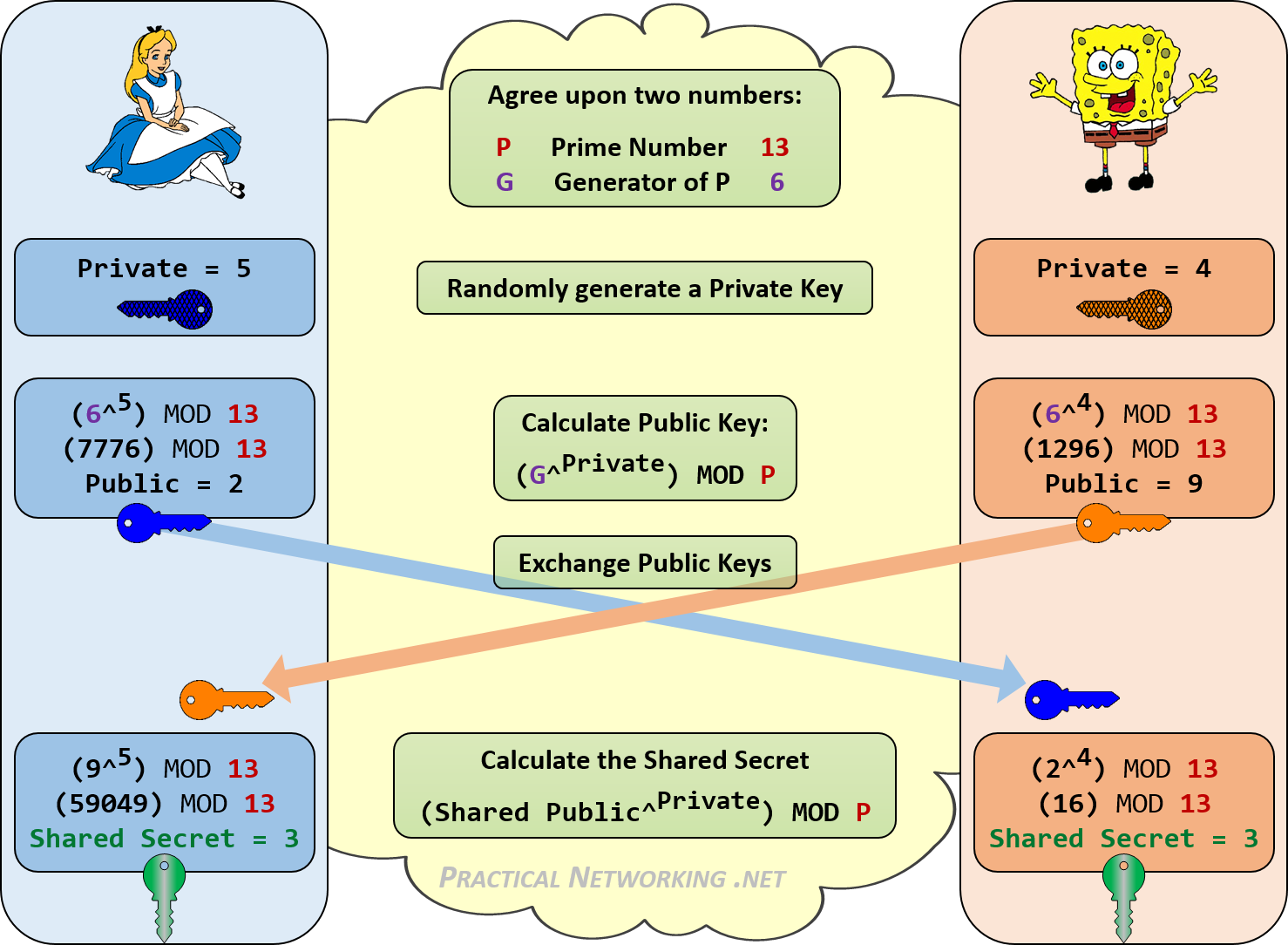 The shared secret "3" can only be attained if you have either of the Private Keys (5 or 4). The values shared over the internet (13, 6, 2, 9) can not be reliably combined in such a way as to extract the shared secret (3).

And this Q&A over at the Cryptography Stack Exchange provides more explinations of how it works:

Edit: As Ricky Beam pointed out in the comments, the numbers above used in the illustration are intentionally small and simple to show you the math of the DH exchange.

This is addressed in the aforementioned article, but for the sake of simplicity I'll quote the relevant section below.

Remember, any key is susceptible to brute force. In large part, the goal of Cryptography is to use numbers and calculations so large that attempting to brute force a particular key would take an unreasonable amount of time (1,000's and 10,000's of years).

In our example, we used a Prime number of 13. Since this Prime number is also is used as the Modulus for each calculation, the entire key space for the resulting Shared Secret can only ever be 0-12. The bigger this number, the more difficult a time an attacker will have in brute forcing your shared secret.

Obviously, we were using very small numbers above to help keep the math relatively simple. True DH exchanges are doing math on numbers which are vastly larger. There are three typical sizes to the numbers in Diffie-Hellman:

The bit-size is a reference to the Prime number. This directly equates to the entire key space of the resulting Shared Secret. To give you an idea of just how large this key space is:

(Note, this article was written in 2015. At the current moment (2020), the key sizes above are considered too small)

I suggest you visit the Cryptography section of Stack Exchange. Your question is on-topic there.

You can answer part of your question by reading the Wikipedia page on Diffie-Hellman Key Exchange. Generally, Internet protocols rely on selecting among pre-agreed constants. You can find information about that in the specifications for the particular protocol of interest, for example, IPSEC RFCs.

Not the answer you're looking for? Browse other questions tagged layer4 or ask your own question.

1
Why No Source and Destination IPs in UDP Datagram?
9
Window Size and ACK Number
4
Difference between UDP and TCP
0
TCP - ack and retransmissions - Is this scenario possible?
3
What's the difference between port number and protocol number?
2
Confusion regarding Port number
1
TCP Vegas: formula for expected number of backlogged packets
1
Sender and Receiver timers in GBN, SR and TCP?
0
Can a ACK or SEQ Number exceed a range and crash the NIC?
2
What's the use of an acknowledgement number without the ACK flag set?