Why does the Layer 3 switch drop the ping packet?

I am trying to ping from PC2 (not PC1, there's typo in the picture) to the router's int g0/0, but the packet is dropped at the L3 switch which is along the path. I have tried setting a default static route, a default gateway, the router-on-a-stick technique and even ospf network advertising from both the L3 switch and the router. 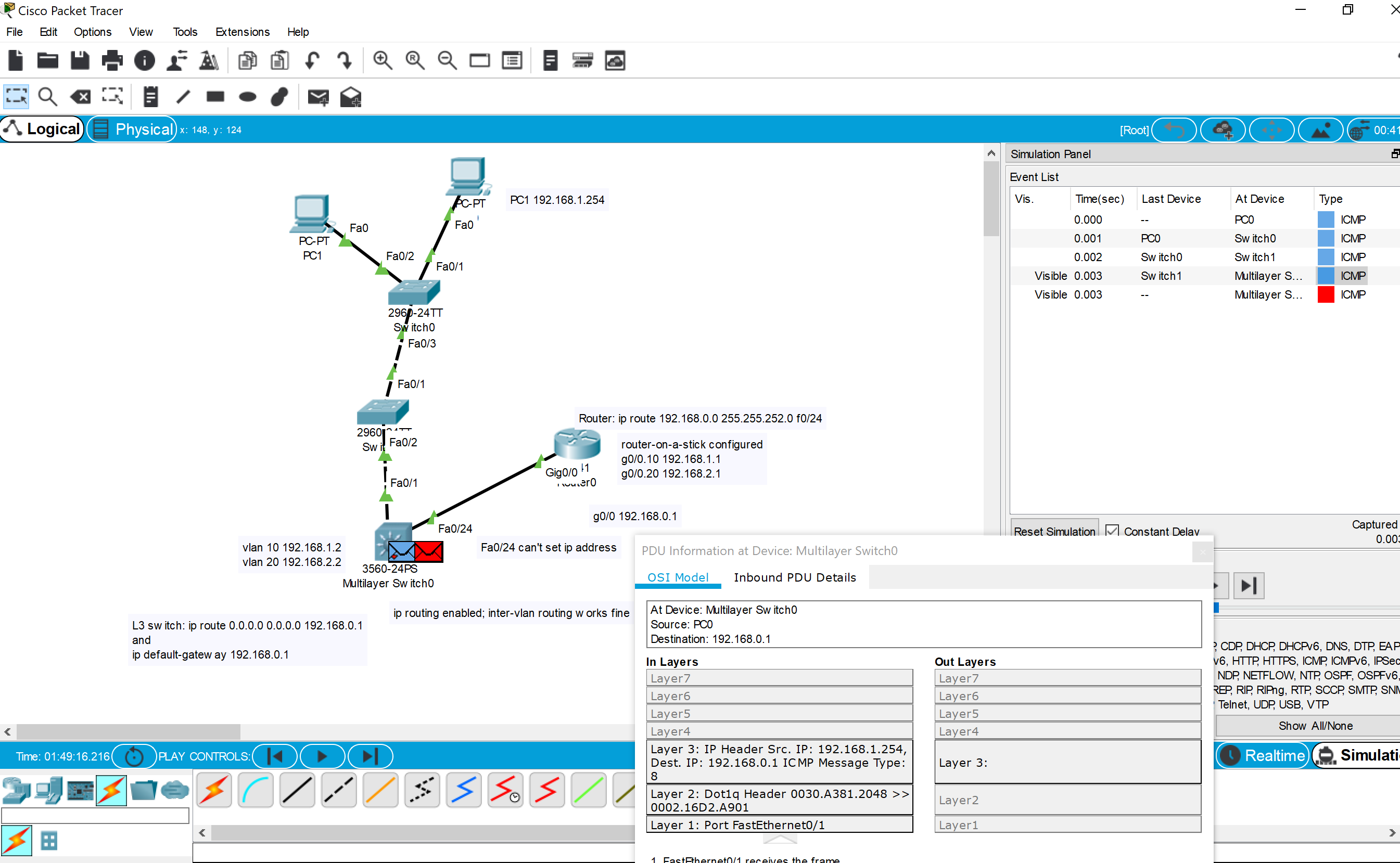 You have some problems. For example, the only way for the router to know about the other networks is via OSPF, but you have no interfaces participating in OSPF because the OSPF network statement does not match any interfaces.

Also, if the layer-3 switch is routing, as you have configured, then you should not use the default-gateway command. That is for layer-2 switching, not layer-3 switchin.

The default route you have configured on the layer-3 switch should really be on the router, and the OSPF on the router should then have the default-information originate command.

The router should not have the sub-interfaces for the VLANs configured because the routing between the VLANs should happen on the layer-3 switch.

The layer-3 switch should have the interface to the router set with no switchport and an IP addresses for a link between the router and switch, usually a /30 or /31 network, so that there are only two addresses for that network.

Also, you need to make sure that you actually configured the VLANs on the switches with the global vlan <vlan number> command. This is not the same as creating the SVIs.

I do not see where you have DHCP configured to assign addressing and gateways to the PCs.

Not the answer you're looking for? Browse other questions tagged routing switch switching layer2 layer3 or ask your own question.

9
Cisco ASA Routing Issue
6
Successful Auto/Auto PAgP Port Channel?
6
Switchport BPDUs dropped at ASA firewall
2
Quagga not announcing external routes over ibgp session
1
What can cause a Layer 2 Switch to drop frames that aren't malformed?
3
Data-packets, sent to a router, are treated differently based on their origin: clarification needed
0
Cannot Ping Linux PC through L2 Switch
4
Can't ping Router from vlan 2 or 1 or between vlans
0
Unable to ping between router and routed port on L3 switch. Why?