I understand layer 3 switches are essentially routers, but often don't have the capabilities a router has, e.g. NAT. So I'm trying to work out where it would be necessary to have layer 3 switches vs routers

When is would use layer 3 switches oppose to routers for two buildings.

Layer-3 switches in each building will give you the most flexibility.

Configuring an L2 trunk -- or even a StackWise or similar link -- between the buildings will make subnetting and management less complex. You can do this even if you select layer-3 switches as your equipment.

For small sites, it's worth evaluating the cost of using the same type of switch everywhere. You might find the extra spend makes sparing and operations easier.

Fiber type may be another choice you can make. Single-Mode Fiber (SMF) has advantages in range, support for higher-speed interfaces, and sometimes, compatibility with carrier connectivity (without extra devices like media converters.) Multi-Mode Fiber (MMF) is slightly less expensive upfront, and so are the transceivers you use with it. My personal experience is that standardizing on all SMF can simplify inventory and operations without creating too much cost for small sites (e.g. those without so many links that the price difference becomes large.)

Even firewall can be used in place of router as per your requirement If your setup wants to access any other DC resources from point to point link you can have feasibility connectivity from layer3 as L3 interface and configure static routing both ends. 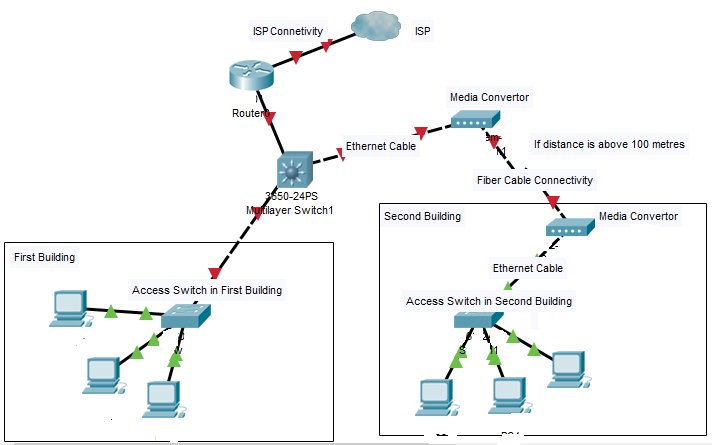 Not the answer you're looking for? Browse other questions tagged network networking design or ask your own question.