What L4 protocol is used on the Abis GSM interface? DTAP (BSSAP)?

So it's BTSM over LAPD over (PCM30 over G.703). The BTSM message discriminator selects the RLM packet type and the next layer will select one of RR, MM or CM but what actually is this next layer. Is it DTAP? 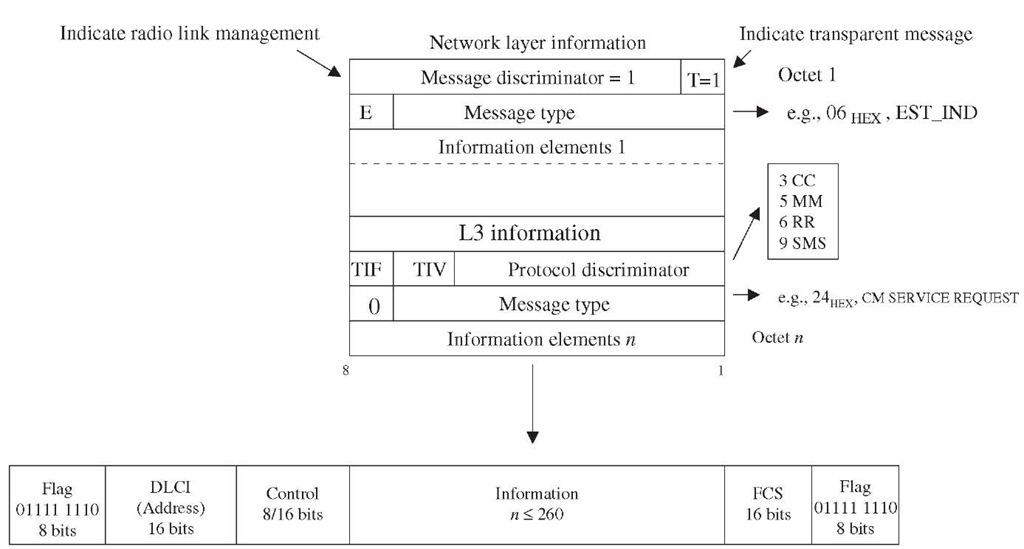 One assumes if it is DTAP, it's converted to a raw RR/CM/MM (UmL3) over LAPDm over CCH for the Um interface 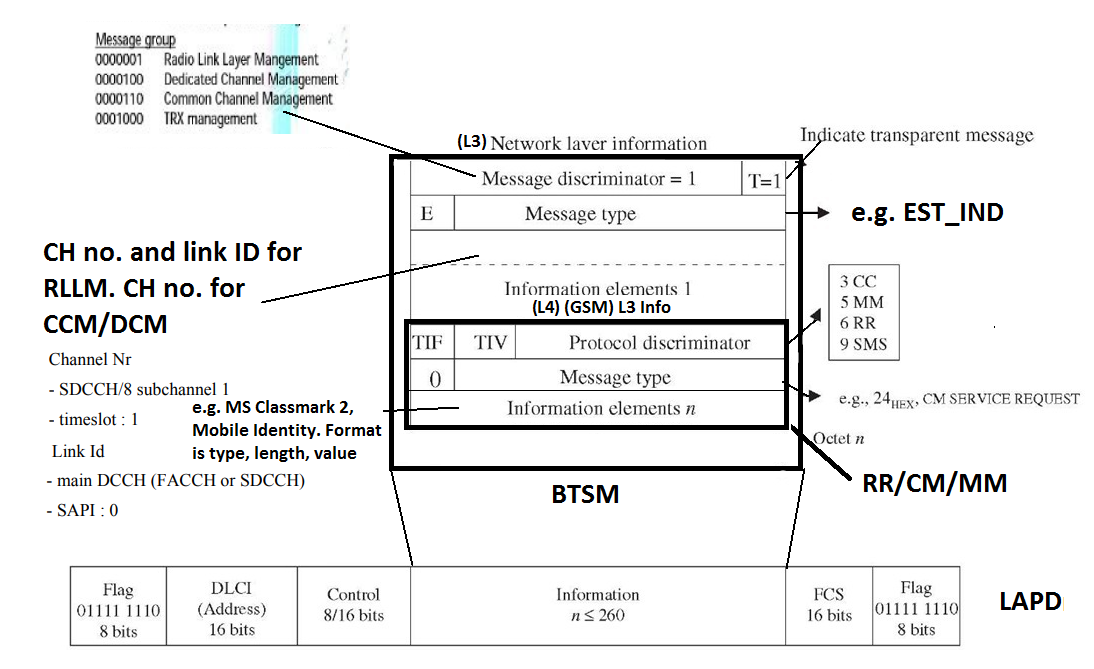 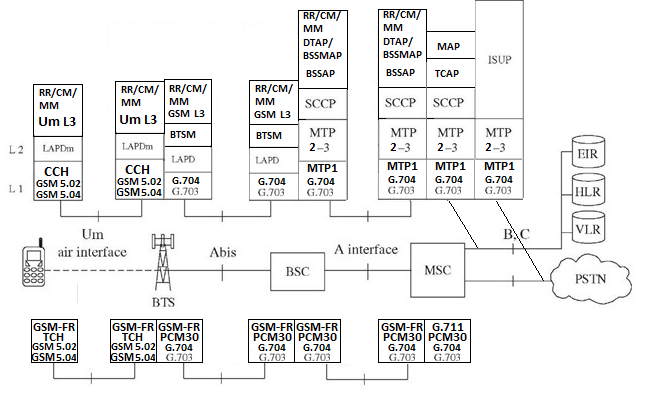 BSSAP and DTAP are in the same box because it is not an encapsulated protocol but a BSSAP packet format and RR/CM/MM are DTAP packet types and are not encapsulated. G.703 and MTP1 are in the same box because they are both on the physical layer -- G.703 defines the physical medium and line code; G.704 defines the TDMA frame structure to produce virtual channels on the physical channel; and MTP1 defines a single virtual channel (a time slot). MTP1 presents the same logical channel as the one presented by G.704, GSM5.03 presents a coded logical channel, and the ciphering sublayer between that and GSM 5.02 presents a ciphered logical channel. MTP1 is Q.702.

Similarly GSM 5.04 defines the physical medium and modulation; GSM 5.02 is the timing and TDMA; and CCH/TCH is the virtual channel that is defined in the time slots provided by GSM 5.02, which has coding defined in GSM 5.03. The GSM-FR speech encoder accepts 13 bit linear PCM at an 8 kHz sample rate. This can be direct from an analog-to-digital converter in a phone or computer, or converted from G.711 8-bit nonlinear A-law or μ-law PCM from the PSTN with a lookup table. The encoded speech is passed to the channel encoder specified in GSM 05.03 (TCH).

I am not sure of the MTP1 analogue for LAPD or G.711, but I am omitting it, and calling the latter PCM30, because like MTP1, it is formal, and implicit from G.704. GSM 5.03 has more meat to it because it defines further coding. 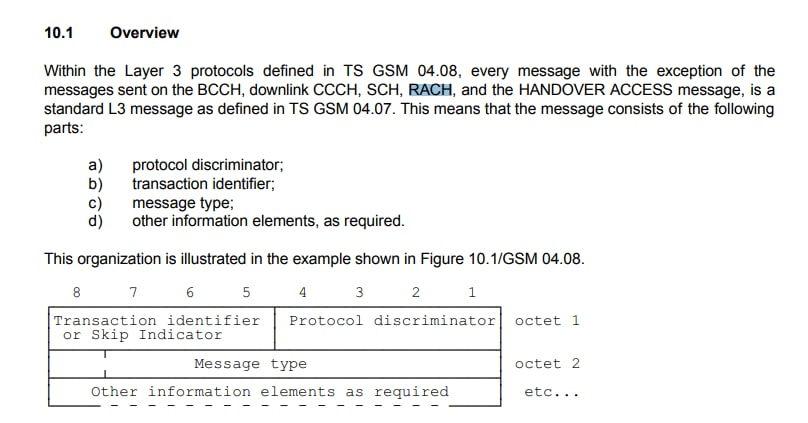 CCCH channels like RACH don't use LAPDm and have a specially defined L2 RR packets, and it's just called GSM CCCH on wireshark. Here is one for RR Immediate Assignment: 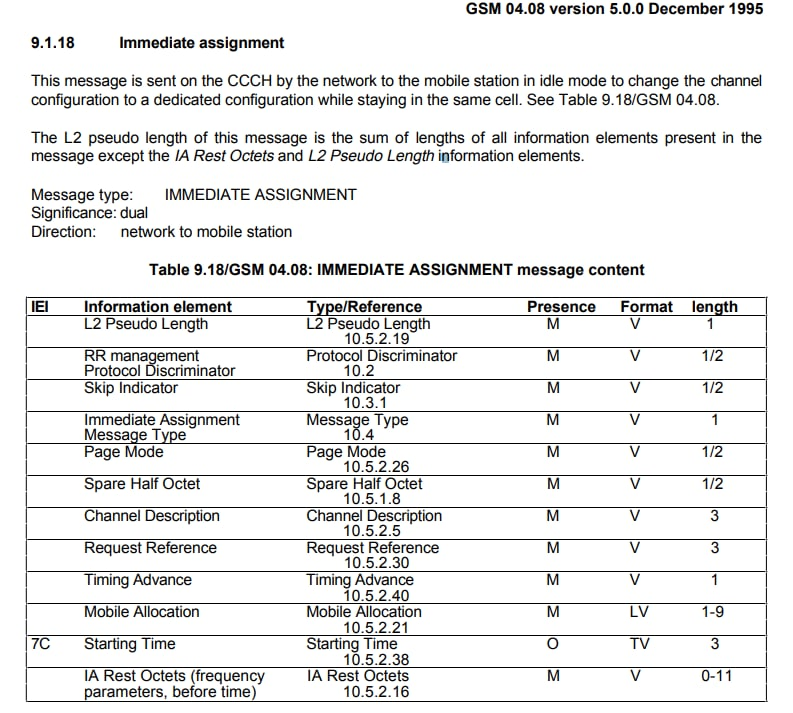 I believe that the Um L3 is the same is 'RIL3' and the GSM L3 is the same as 'RSM'. CM, MM and RRM are sometimes misleadingly stacked on top of each other. 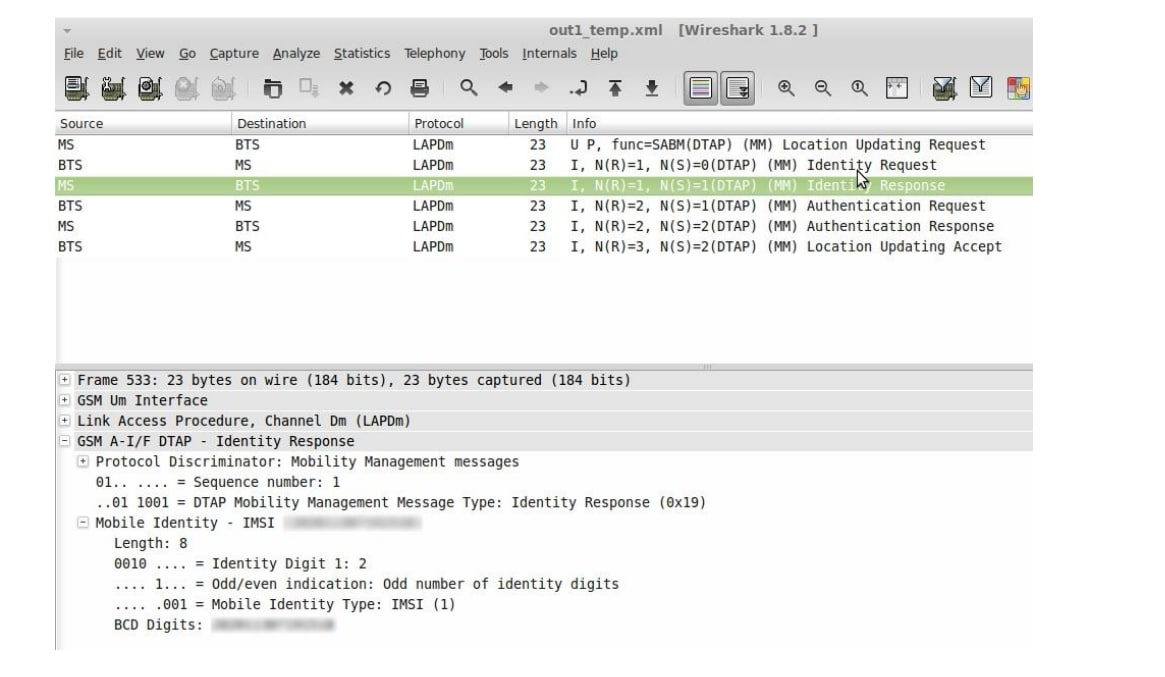 This proves that DTAP MM messages are still called DTAP when received by the mobile, though they are not DTAP packets.

DTAP packet protocol discriminators are RR/CM/MM, whereas BSSMAP does not have a discriminator, but can send a BSSAP-BSSMAP-DTAP-CM packet for instance (and that is a single packet on one layer of the OSI model).

Not the answer you're looking for? Browse other questions tagged gsm or ask your own question.