Difference between N3K and N5K

Be sure to understand the limitations of the N5K

And then I have a fragement of memory of throughput rating dropping from 960Gbps to 240Gbps with the L3 card - but I'll try to find better info source for that. 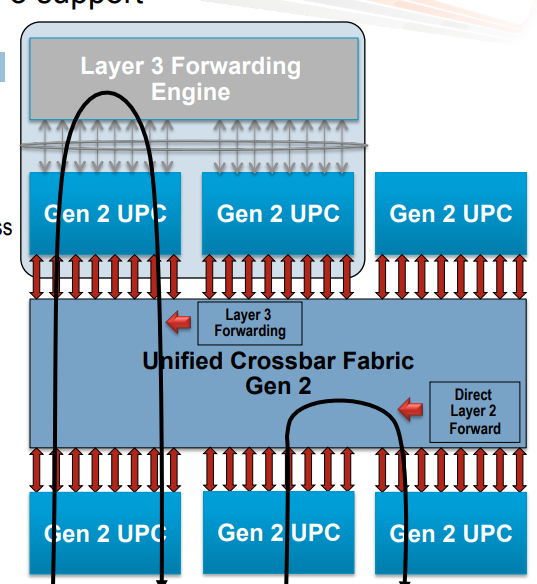 Hence: The N5K is a very fine L2 switch with can be persuaded to do "some" L3 work. A full-fledged L3 switch, it is not.

Start from this page for the 5500's verified scalability and this for the 3K.

In short (...and as mentioned above) the L3 switching module on the 5500 is basically a router on a 16x10GE switch. The verified scalability guide calls out a 256 SVI limit. If your requirement for 650 'interface vlan' maps to SVI's then the 5K is likely not fit for purpose. The 5500 is, however, capable of supporting up to 4000 active VLAN's (...once again reinforcing that the 5500 began life as a competent L2 switch).

The 3064 can support 1024 SVI's, but the platform can only support 507 active VLAN's concurrently (assuming MST). Again, if you're defining 650 SVI's then this would tend to imply defining at least 650 VLAN's and is over spec for the switch. The 3K was built as a low-cost top-of-rack switch with (old) merchant silicon that could support L3 and decent throughput but wasn't intended to do any kind of L2 heavy lifting.

If I were forced to choose, I'd use the 5500 as an L2 switch to terminate other switches and deal with trunking, whatever flavor of STP, etc and then use the 3064 via an LACP bundle to handle L3.

Basically the point is that neither switch should be newly deployed into any kind of production role. Beyond any question of scalability they're both going to soon hit a point where there aren't even security updates, much less bug fixes or useful enhancements. Both platforms have been in the process of active retirement for years at this point.

If these are your two options, find a third.

The N3k is suitable for your application.

The main advantages of the N5k are the ability to use fabric extenders (very similar to stacking tbh) and to combine fibre channel & Ethernet for networks which have legacy SAN needs, as well as some models having expansion slots. However, it is a more complex product line; and doesn't offer very large MAC & layer-3 tables as compared to many other modular multi-layer switches.

You didn't describe your plan for aggregating the 650 interfaces/ports but I assume you are confident in that aspect of your plan.

Not the answer you're looking for? Browse other questions tagged cisco-nexus cisco-nexus-5k nx-os or ask your own question.

9
How to connect private users to applications within a trusted network without direct connection to the Server Switch
3
Cisco N9K without ACI? Or am I better off with N5K?
6
NX-OS 9.3: ECMP polarization and “ip load-sharing … rotate”
1
questions on nexus 3064
2
Cisco n3k-3064PQ-10gx TCAM problem
0
cisco and mikrotik as console server
0
nexus n3k %ACLQOS-SLOT1-4-ACLQOS_OVER_THRESHOLD alert
0
Nexus 3064 Sflow performance