Difference between SVI and subinterface

Modern multi-layer switches seem to support both SVIs (switch virtual interfaces) and subinterfaces concepts. Both are virtual layer 3 concepts used to perform routing functions and some equipment supports both.

Sometimes the documentation can even put composite limits on both SVIs and subinterfaces, highlighting the similarities as well. Here is a snippet for Cisco Catalyst 9500 Series Switches.

You cannot configure more than 4,000 Layer 3 VLAN interfaces. The sum of all the routed interfaces, SVI interfaces and subinterfaces should be equal to 4000 or less.

What are the differences between SVIs and subinterfaces for multi-layer switches? Can one always be used in place of another?

Another aspect to and expanding a bit what zac67 already gave in his answer:

VLAN IDs used on tagged (sub)interfaces of routed interfaces (a.k.a. no switchport) can be completely independent from the switch's "switching" context [1].

In extenso: the VLAN tag used on the subinterface does not appear as a L2 VLAN on the switch, neither consumes nor is part of any instance of (per-VLAN-)spanning-tree, and won't be part of any VTP/GVRP setups etc. There can even be subinterfaces of multiple routed interfaces using the same (overlapping) VLAN tag - and they'd be completely independent: Sometimes, this s referred to as "port local VLAN awareness".

SVIs in contrast are based on the existence of the given VLAN (as in: "L2-VLAN") on the given switch. So to have an SVI, you'd need to first create the said VLAN, get its spanning-tree right, check if it's part of VTP/GVRP if so intended etc.

[1] Well.. somewhat. There are/were switches (Cat6500, for example) that would consume a VLAN ID (henceforth hidden) when configuring a routed port, and they had their issues with or plainly did not allow tagged subinterfaces of such routed ports. Behind the scenes, they would internally configure a VLAN without spanning-tree, map the configured port into that VLAN, and add an SVI with the pseudo routed port's configured ip address).

A subinterface is part of a physical interface, used for a single VLAN. Usually, you only have those for routed interfaces (L3) that do not take part in L2 forwarding = switching.

The major difference is that an SVI is bound to a VLAN used for L2 switching, while a subinterface is part of an L3 interface that doesn't take part in L2 switching. Accordingly, a specific VLAN ID on a subinterface may indicate a different VLAN (L2 segment aka broadcast domain) than the same VLID on another interface.

When you have a layer-2 configuration with VLANs, each VLAN basically acts as a virtual switch. That's the point of VLANs, after all. You can think of the traffic flow as coming in through a port, getting split up (demultiplexed) into different VLAN flows, getting L2-switched independently in each VLAN, and then on the outgoing side, flows from different VLANs get combined (multiplexed) again before they flow out the single physical port.

(Of course, switches aren't actually implemented with separate wiring for each VLAN. They mostly act as if they are)

The switch also has some kind of layer-3 processing hardware which implements a virtual router (but not a switch).

Some switches only support one mode or the other per port, and some switches let you mix-and-match, with L2 bridging for some VLANs and L3 sub-interfaces for others.

This is a conceptual model - actual implementations may differ. 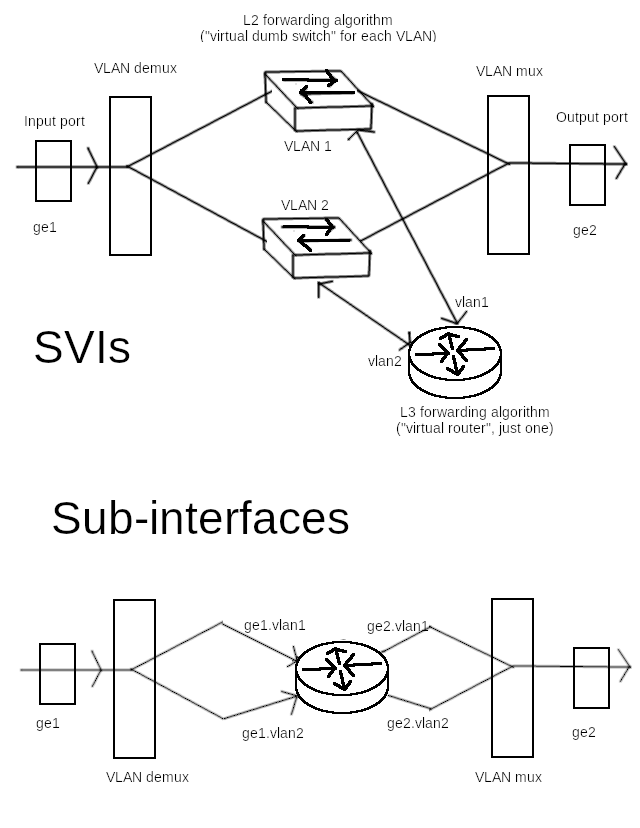 The term SVI and subinterface are almost same . It's functionality seems to be same as well but it's terminalogy changes as where we are using it ..

Whereas SVI(switch virtual interfàce) are configured in layer3 switches or multilayered switch the switch which can operates on both layer2 and layer3 .. SVI configuration in layer3 switch will ensure communication between different Vlans or different subnets ..

It is L3 interfàce for particular subnet

Not the answer you're looking for? Browse other questions tagged cisco routing switch vlan or ask your own question.