How to Balance SPAN Traffic from Redundant Switches

So we are wanting to deploy an IDS device to capture EAST-WEST traffic in a LAN.

The actual topology is more complicated but our issue boils down to this: 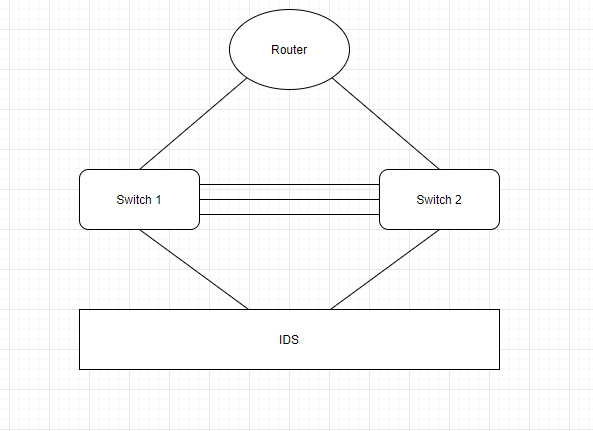 We are attempting to configure SPAN sessions from the many VLANS to the ports connected to the IDS.

However, to prevent the IDS from receiving multiple packets for the same traffic, we attempted to configure the two links in vPC (virtual port channel), which, I think, would ensure the traffic isn't being duplicated twice from the two switches.

However, the IDS solution does not support link aggregation of any kind, so teaming the NICs to allow for vPC does not work.

Is there any other solution to configuring redundant SPAN sessions?

These are Cisco Switches and a FireEye NX (IDS/IPS).

You can configure a vPC EtherChannel facing the IDS in on mode (channel-group 1 mode on) as opposed to active mode. This mode doesn't require participation of the IDS to form a LAG; it doesn't need to support LACP to receive mirrored traffic.

vPC or LAG (between the switches) doesn't solve your problem.

If you want to exclude all traffic between the switches, simply exclude the cross ports (or LAG) from monitoring. The traffic they carry has already been mirrored from another port.

If you mirror all ports on a switch you'll capture each frame twice - on ingress and on egress. So, you can safely exclude the ports that carry transit traffic only (between monitored switches). Also, you should mirror traffic ingress-only or egress-only. For IDS, I'd go for ingress-only so it'd include attacks on the switches themselves.

Towards the IDS appliance, you shouldn't use vPC or LAG since that might distort detection - frames from the "wrong" interface could be ignored.

In any case, vPC doesn't help one bit with removing duplicate frames - they'd need to be detected first which simply doesn't happen. Matching duplicate frames would require significant work (at least compute n frame hashes and compare n² hashes for n frames), so avoiding duplicates in the first place should be your aim.

Not the answer you're looking for? Browse other questions tagged cisco network redundancy mirror or ask your own question.