This question is a repost of the same question in The Cisco Learning Network; however, the answers are unique to Stack Exchange.

Now, when I want to configure priority I don't undertand WHY the priority must be in increments of 4096 ? Is there a specific reason for the default value of both of these numbers?

In the spanning tree algorithm the process of determining the root bridge is based on the bridge priority (BID).

When there were no VLANs (meaning that switches had to deal with only one broadcast domain) the BID was equal to:

As Network administrators we can modify the bridge priority value.

When VLANs were introduced the needing of differentiating the STP protocol raised (Per VLAN Spanning Tree - PVST).

To accomplish this the bridge priority value was modified as follows:

We are still able to modify the bridge priority but this means to operate to the 4th most significative bit over 16 bits.

To put it simple:

The bridge ID is an 8-Byte (64 bit) value composed of the following elements: 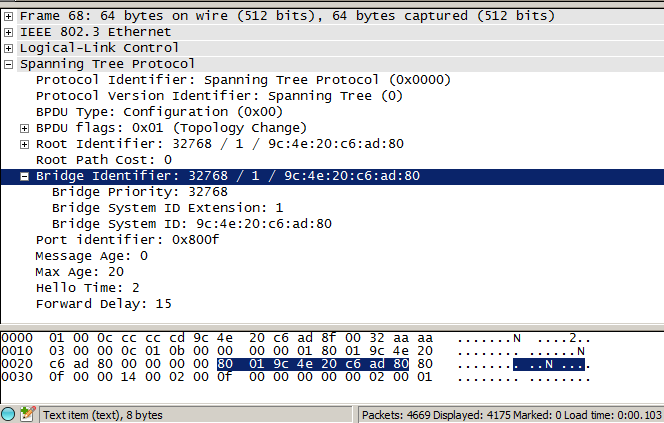 This and the basics of the STP root election process can be found on my blog.

This article provides some good information regarding this. Basically this is due the extended vLAN headers length; 12 bits allowing support for 4096 vLANS and only 4 bits for the priority.

The 12 bits of extra VLAN information allows support for 4096 VLANs, so there is full support for extended range VLANs. Therefore because of the use of the Extended System ID in the Bridge ID, there is only the first 4 bits of the original 2 byte number to be used for the bridge priority so it only allows multiplies of 4096.

Not the answer you're looking for? Browse other questions tagged switch spanning-tree or ask your own question.