We have an IKEv2 IPSec tunnel between two Sophos XG Firewall appliances in a corporate system for a remote site.

We don't have any specialized MSS or MTU settings other than what the IPSec tunnel already applies.

Our IPSec configuration profile for the handshake of IKEv2 IPSec tunnels fits the following profile: 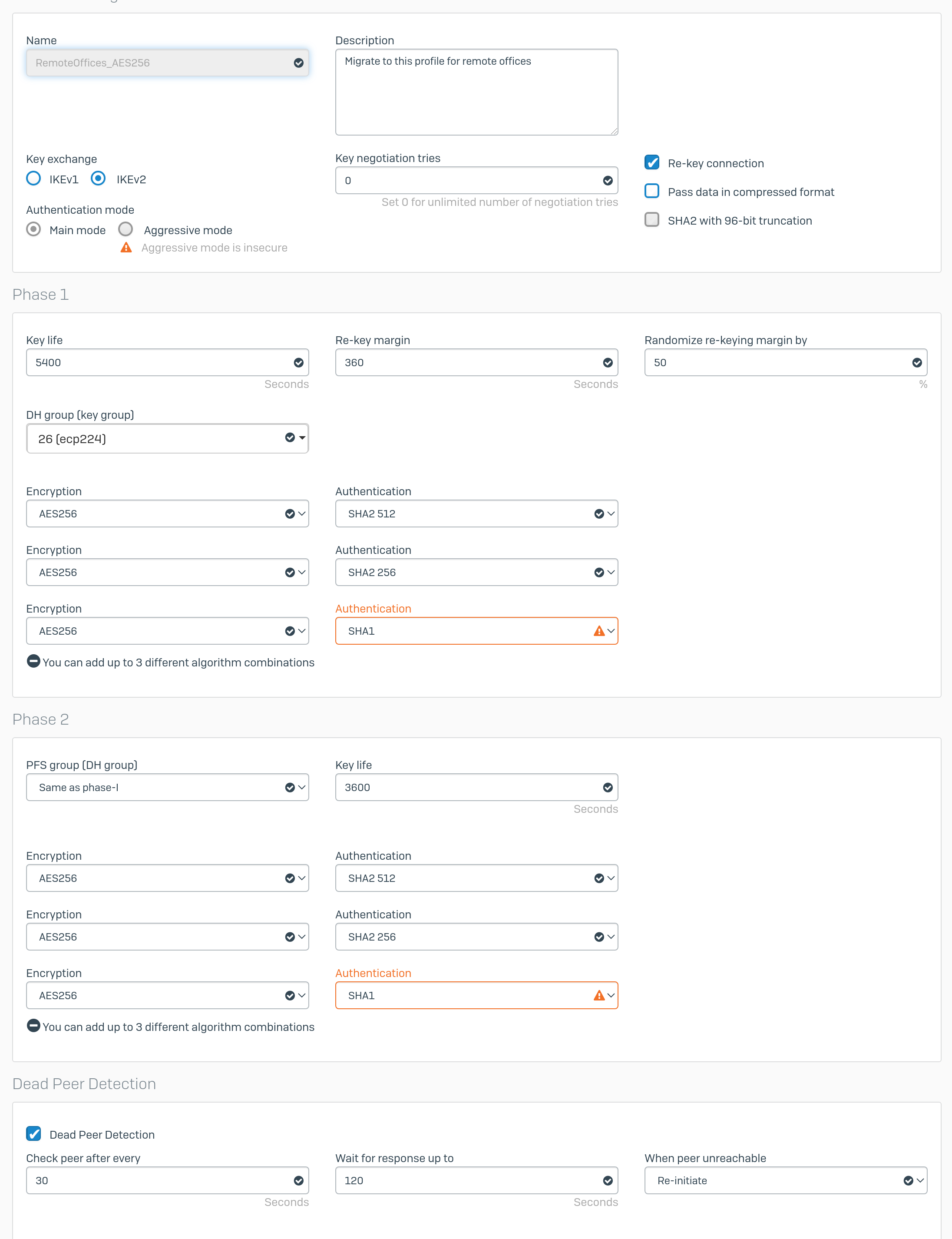 ... and the tunnel is established.

HOWEVER we're seeing a huge skew from expected traffic - the MSS is 1382 bytes, but we don't seem to be able to replicate this in our calculations.

MTU on the actual network links between everything is 1500 MTU (ISP uplink, Ethernet MTUs internally, etc.) so we're headscratching a little bit here on how the MSS is being calculated here.

If this is, ultimately, a cause of the Sophos XG IPSec tunnel doing MSS clamping internally, then this makes sense, but a breakdown of its encapsulation and calculations would be appreciated if someone is privy to the 'defaults' at play here. Expected MSS per all sane calculations would STILL be a standard 1472, except between the two XGs it's much lower than that, so if anyone's familiar with why this is the case, your insight would be appreciated - it makes zero sense logically.

From where we can draw, based on your IPSec settings and a few common optionals thrown in:

To show a different example, here's a screenshot from Cisco's calculator, based on what would happen if MSS were clamped to 1382 (plus 20b TCP gives the "original IPv4 payload" of 1402) and where none of the "optionals" are at work: 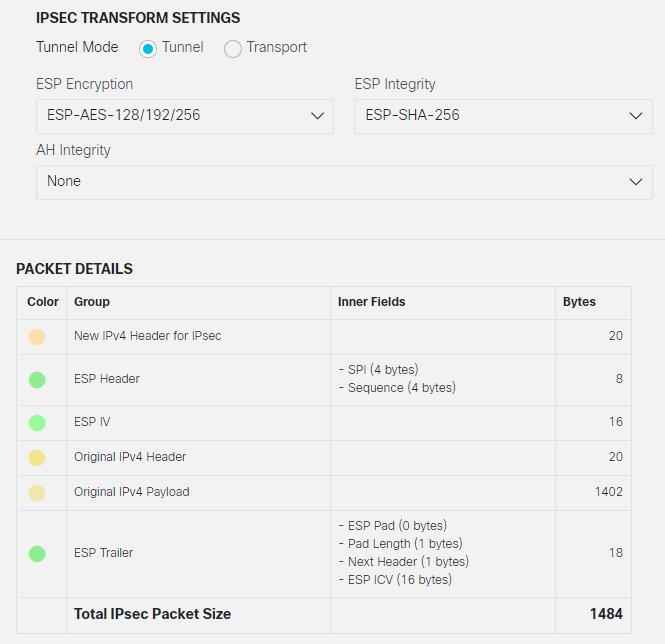 Even two directly connected hosts, with a direct ethernet connection (Ethernet Packet size 1514 bytes and IP MTU of 1500) will never have an MSS of more than 1460.

So I suggest you check/verify these:

For the application, please consider:

In short: MSS clamping 1382 is not that far off. There are firewall vendors out there that default to 1350.

About TCP MSS clamping vs PathMDU-Discovery

Some products do it by default (Cisco ASA, Fortigates), some only after explicit configuration (Juniper ScreenOS based devices, Cisco IOS routers) - I couldn't say for others, from the top of my head.

TCP MSS clamping may be considered a kludge, but in my experience, it does its job more reliably and a lot faster than PMTUd ever will, and therefore I consider it a blessing.

PMTUd depends on ICMP fragmentation needed packet generation by an intermediate hop and successful delivery thereof back to the packet source and correct interpretation of the error message at the source host.

All it takes is one stubborn security admin ("ICMP unreachables are always bad, m'kay?") or a broken NAT implementation ("oups, an incoming ICMP unreachable? I dunno how to match that to any session, let's drop it!") , or even one simplicistic TCP/IP stack (Printers, anyone?) unable to parse the ICMP fragmentation needed message. Any of these along the path or on the end system, and PMTUd dies a horrible death.

TCP MSS clamping however is instantaneous: MSS is only exchanged during the initial handshake, and the ever so slight delay while the clamper manipulates the MSS field in TCP won't be noticed anymore, afterwards. Things just hum along with reduced packet size... [2]

PMTUd on the other hand might come into action with some delay. SYN, SYN-ACK and the client's request [3] packet(s) might still be way below PathMTU. Even the first few packets of the server's response might be small enough to sneak through without fragmentation. And when the bulk transfer of data is about to start, this get sluggish.

Also: please bear in mind that "recieving ICMP fragmentation needed" packets and the vendor's way of doing "df-bit ignore" might be independent.

They might still choose to implement a strategy of "let's fragment that thing anyway, BUT ALSO send a 'fragmentation needed' and hope they react to it and send smaller chunks next time".

To spot such behaviour, you might have to pull packet dumps at the destination, and see if and in how many fragments the packets near/at/over the PathMTU's size arrive. [4]

Yes by all means, investigate the application which has trouble to work across that MTU reduced link.

If TCP is in use, be sure to check the MSS value in both SYN and SYN-ACK on both ends of the TCP session. If either sees an incoming MSS value that's larger than the reduced MTU link, things will get nasty.

Also: Double check that PathMTU discovery works in both directions: It's fine that a spoke site's firewall tells the client to send smaller packets. At the HQ's/datacenter's end, someone should tell the server, too. Again, PathMTU discovery is an unidirectional concept.

Also: Verify if there are load balancers or "WAN accelerators" along the path (or anything else that acts as an unexpected "TCP endpoint in the middle". I've seen some of these do horrible things to TCP, crippling applications to a degree that makes me want to do unspeakable things to delevopers and clueless operators running them.

In short: Capture a few seconds of traffic at the TCP speakers on both endpoints, and look at what happens oce things start to go wrong. Compare the packets as they leave and (if and) how they arrive at the respective other end. Look for fragments, changed IP and TCP header fields, missing packets, retransmissions.

[2] ... and go haywire if the path's MTU changes, because rerouting just happened out somewhere in the WAN and a link with even lower MTU is being used. Can't have everything, can you?

[3] Please note: TCP as such has no notion of "client" nor "server". To TCP, there is just an "initiator" and a "responder". It is however common that an application client acts as initiator and the server is usually the responder.

[4] If you really need to dive deep: Replicate the setup in a lab enviroment, and use "ESP-NULL" instead of AES-256. Give or take a few changed field lengths and probably slightly less overhead, the tunnel endpoints will to the entire IKEv2 and IPSec thing (well, without a few "Sec" parts) and then you can packet-capture (not quite) encrypted traffic and see what's actually happening on the WAN/Internet side of the firewall.

Not the answer you're looking for? Browse other questions tagged ipsec tunnel ike sophos or ask your own question.