I am trying to figure out if an L3 switch is able to act as a switch and as a router at the same time for the same packets. Consider the following architecture: 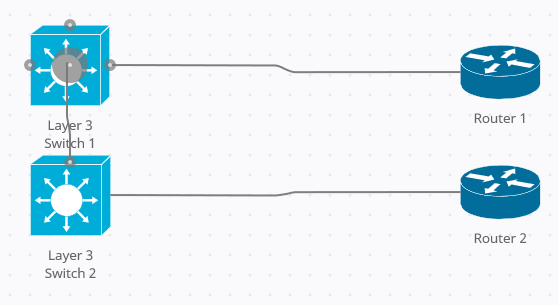 I would like to set up VRRP for both sides so that each side sees only "1" IP address. Is it possible to configure somehow the L3 Switch to act as a switch and as a router so that I can set up VRRP? The logical architecure would be like this so the logical red box would be the actual L3 Switch:

If I set up one port as routing port and one port as switchport in each L3 switch, would it work?

Thank you in advance, if you need any details let me know.

I am trying to figure out if an L3 switch is able to act as a switch for himself.

That's a main point of an L3 switch. It switches on L2 and routes between VLANs.

Is it possible to configure somehow the L3 Switch to act as a switch so that I can set up VRRP?

Provided the L3 switch supports VRRP then yes, that's possible. For full functionality you need to set up an SVI on a VLAN and not use a routed port (since a routed port doesn't support switching in case of failover).

Note that VRRP provides gateway redundancy for end nodes. Routers simply route across common subnets. With more than two network you'd need to provide routes to remote subnets though, using static routes or by setting up a routing protocol like OSPF.

It's easiest to visualize an L3 switch as an L2 switch with an integrated but seperate router. While the switch forwards frames between switched ports and SVIs (but only within a VLAN), the router forwards packets between SVIs across VLANs) and routed ports.

Not the answer you're looking for? Browse other questions tagged switch router vrrp or ask your own question.

33
Using SNMP to retrieve the ARP and mac-address tables from a switch
10
If two NICs are bonded and connected to different switches how does a router decide which switch to forward the packets to?
1
How does a router monitor traffic between two devices on a switch
2
MCLag active-active and VRRP
2
Best practice for connecting router to switch? (re: VLANs and multiple ports)
0
Cisco Router and TP-LINK Switch
1
hsrp on both side of router
2
Question about Ubiquiti Edgemax switch syntax and VLANs
1
Proxy-ARP when the destination device is connected to the same layer-2 switch, but belongs to a different subnet
0
Juniper MX204 to Juniper EX4300 redundant fiber links with load balancing