This system is using 10G ethernet over fiber with SFP+ transceivers.

Lets call my UDP packet generator machine A, my UDP receiver B, the iperf3 server C and my monitoring machine D.

I have two switches, call them S1 and S2. 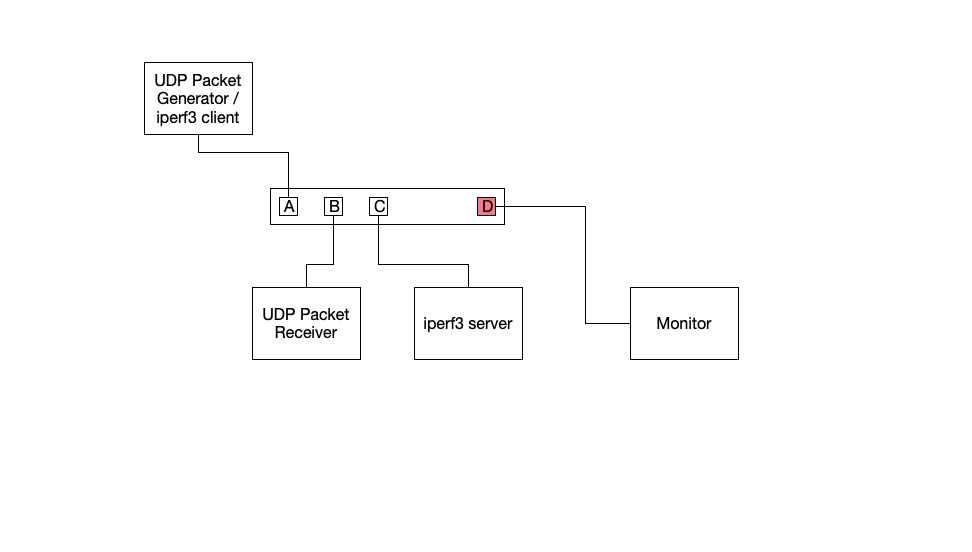 My UDP generator/receiver both have APIs so I can clear and request counters and measure that the packets sent by A are received by B, and my monitoring app also has an API so I can count how many packets were received by D and these numbers should all be equal in a good test.

If I run my test where all of my systems are connected to the same switch (S1), such that A is generating my UDP packets and sending about 800mb/s of traffic, AND running the iperf3 client, which is sending 8gbps of traffic and I mirror port A, then the UDP receiver on B and the monitor on D see the same numbers 100% of the time over hundreds of millions of packets.

Now lets say I have a dedicated iperf3 client machine E, and I connect A and E to a second switch (S2) 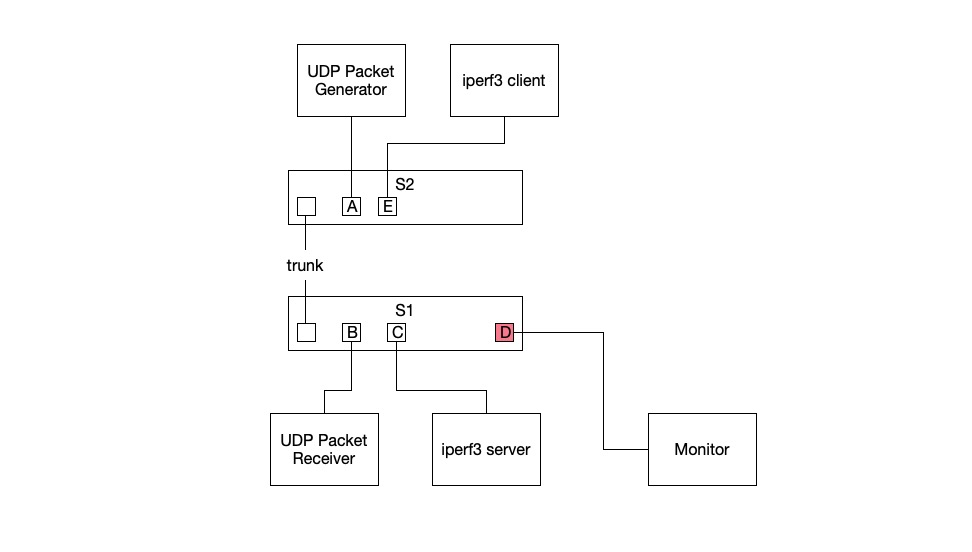 and generate my packets on A as before, but run the iperf3 client on E, and mirror the trunk port connecting the two switches on S1, B(S1) will reliably receive 100% of the packets from A(S2), while D(S1) will drop anywhere from 1 to a few hundred packets.

I don't understand this. The total throughput on the mirror source is exactly the same in both cases so why would the mirror port be dropping packets when the switches are trunked together, when 100% of the packets from A(S2) are being received by B(S1)? Its not bursty traffic so it seems the queues in the S1 would be facing the same pressure in both cases.

Can anyone shed light on why the mirror port would work well when all the traffic is coming from a NIC attached source port, but not when the mirror source is connected to the other switch?

Browse other questions tagged switch trunk mirror or ask your own question.

10
Port mirroring just the Rx (or Tx) direction of a port?
3
Why vlan is mandatory for rspan network monitoring?
1
How to capture from multiple mirror ports with one NIC
1
What requirements must general firewall/routing software meet, to make OSI 2 port mirroring work correctly?
2
Capturing traffic from multiple connections on a switch
1
IP Domain-name on aggregation layer switch
1
What does the speed of Network Switch actually mean?
0
Measurable performance impact of port mirroring on a firewall\security device?