Is it possible to NAT PIM Join packet?

Assume the receiver and the source are in two different networks (address regimes). Thus NAT is required. The upstream source and the groupe are included in the PIM Join packet while building the multicast tree. Is it possible to translate the network addresses included in PIM Join packet ?

I have searched and haven't found anything so far.

You appear to have the wrong idea of how multicast works. Join/Leave are client (receiver) functions. The sender of a stream doesn't join the group.

If you have two isolated 192.168.1.0/24 private LANs, then NAT would have to be applied to the multicast traffic leaving/entering each LAN, just like any other layer-3 traffic... a src of 1.1 doesn't mean anything to the rest of the internet, and will only be confusing to the other network. A multicast packet is fundamentally the same as a unicast packet: it has a source address and destination address. If you transport a multicast stream from 192.168.1.1 to 239.0.0.1 into the other network, the source is now nonsense; the 1.1 in the local network is not the sender. Any client attempting to send a message to the apparent sender will be talking to the wrong node:

The "B" side router will see a join for 239.0.0.1 from the local 1.x host(s); it doesn't necessarily care who is joining the group, just that there's a group it needs to request from upstream. If SSM is being used, then the stream source address matters, again, meaning NAT must happen.

[Note: interconnecting overlapping networks is a pain that everyone tries to avoid. Attempting to mix multicast into that mess is suicide.]

Assume the receiver and the source are in two different private network. Thus NAT is required.

No, it's not. NAT is only required between two address regimes, usually between private and public addressing.

There's no public multicast routing, so there's little sense in trying to use NAT with PIM.

NAT is an ugly hack and you only use it if you must.

After a long research, there isn't manufacturers which propose a solution to translate PIM packets for 2 address plans/regimes. 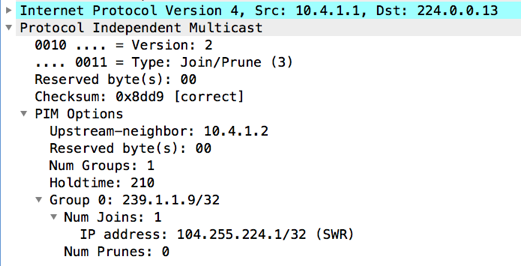 Traditional 'Network Address Translator' translates only the Src and Dst fields of IP packets. If those three adresses are in another address plan/regime, then there isn't any solution/device that handles 'PIM translation'.

Not the answer you're looking for? Browse other questions tagged nat multicast pim or ask your own question.

8
IGMP snooping and link-local multicast addresses
6
IGMP Multicast router overrun
4
Point-to-point vs unicast, and multiaccess vs multicast/broadcast?
1
Regarding PIM sparse mode
3
How do I forward multicast packets over IPSec VPN Tunnel on Juniper SRX?
4
Can a host behind a basic NAT visit two services on a server at the same time?
0
Avoid bottleneck in UDP multicast
0
What prevents a device from receiving its own multicast stream, and can it be turned off?