I was trying to understand how TCP works (not in detail of course). I was surfing the web for easy-to-understand flow diagrams and a question arose and couldn't find a straight answer.

Let's suppose that we have this nice flow where everything is sync (ignore the ending part with FIN and crossing packets): 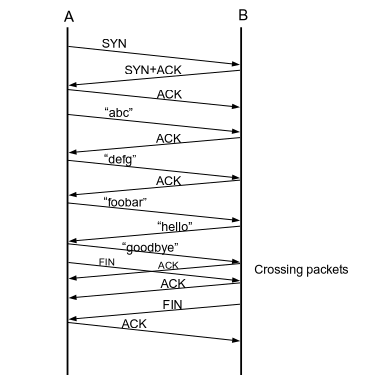 Looking at this schematic one can understand that B can only send data as a response to something to A but from what I understand TCP is a bidirectional protocol so each entity can send it whenever it wants.

Any spec references or other helpful resources are more than welcome.

Rather simple: each direction has its own and independent sequence number and sliding window. So, whether the ends are sending data unidirectionally (one end just ACKing with otherwise empty segments) or bidirectionally doesn't matter.

TCP only acts on the packets it receives, it doesn't know which packets are on the line.

If both sides sends data at the same time, from TCP's perspective, it will send data, then receive data, and after that it receives a packet containing an ACK

Example from the perspective of side A:

Also another question in the same direction, I read that TCP is an SWP (Sliding window protocol), I would like to know how ACKs are formed in this case. TCP is responding with the number of bytes basically as a Seq number, I can't really imagine how that can happen inside a window (where you can receive in any order). Is the implementation using two sets of seq numbers and two windows for both receiver and sender?

TCP was originally designed for slower networks. The sequence number is a 32-bit number, and rolls over every 4GB of data transferred. This was fine when we were in the dial-up time, as we only had internet speeds in the KB range, but this system fails with modern internet speeds, where it could roll over in seconds. These days we add "timestamps" to packets, which increment slower, and it is used in combination with the other fields to handle out of order, duplicate packets and rolled over sequence numbers

Not the answer you're looking for? Browse other questions tagged tcp network transport-protocol or ask your own question.

2
Is TCP congestion control vulnerable to malicious clients?
1
tcp sequence number and routing rule
4
Linux TCP stack repeatedly sends "TCP window update" without acknowledging any data
4
TCP - correlation between ACKs and receive window
3
When TCP sender window shrinks?
0
Sequence numbers and wrap around concept
0
In TCP, when a receiver starts sending duplicate ACKs to the sender, does it also send ACKs for packets it has received past the hole?