Where to put dedicated firewall for two departments separated by their own access switches and connected through a same distribution switch?

Based on figure below. Assume that the in-switch firewall of 3560 is not enough. Let's say there is no VLAN and there are 2 departments, finance and marketing, separated by their access switch on the same distribution switch. Both departments contain sensitive information both in user computers and servers. However, users from both department have to communicate with each other. 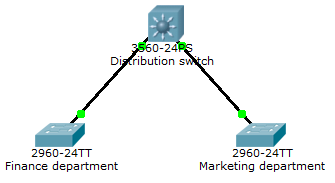 Where should a dedicated firewall to be placed if traffic between these two departments has to be inspected?

Replace the c3560 with a firewall and IPS module; I operate a topology similar to this at work.

If you're merely concerned about 3rd party chat programs like Skype; the best option is blocking all skype traffic going to the internet altogether. That way, nobody will even be able to connect to the skype service and find other parties. It isn't worth firewalling departments if skype is the only problem.

No matter what you also need endpoint security solutions which scan for viruses and account for authorized/unauthorized applications. Consider the reality that files are shared with usb sticks as well.

Not the answer you're looking for? Browse other questions tagged switch firewall design or ask your own question.

11
Trying to fit centralised firewall into network topology
1
VLAN and Subnet relationship with 2 offices sharing a switch
1
Put hosts in own VLAN on the same switch and be able to ping hosts
1
segment/tag based routing in LAN
3
L3 Core to Firewall question
1
Can we set filewall rule to control with in subnet? and also if we use 2 subnet on same interface Is this effect to firewall rule?
1
Is this description of data transmission over L3 switch correct?
8
How Does A Layer 2 Switch Differentiate Between Different Networks?