I have a fairly simply setup, using a PCEngines firewall running OPNSense and an EdgeCore ECS4620-28P L3 switch. The EdgeCore is doing InterVLAN routing and that works just fine, but I cannot get internet access on all VLANs simultaneously.

I want to have the following: 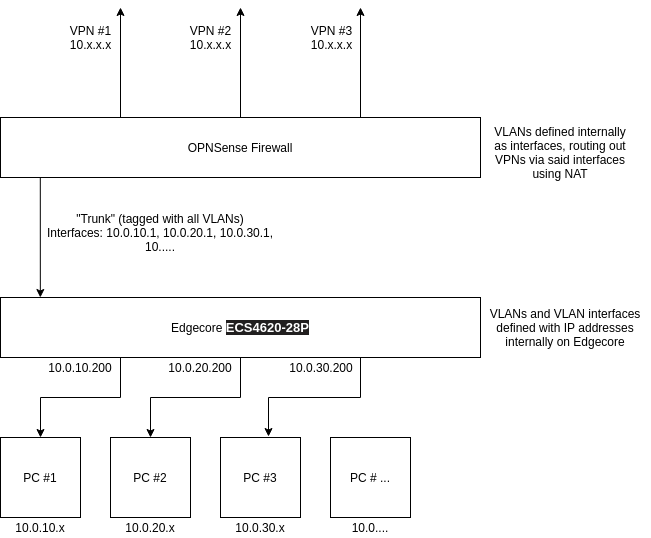 I'm pretty sure I'm wrong but right now I want the path to be:

But that just seems wrong because then there are essentially two interfaces for the same VLAN...

Here are my NAT settings inside OPNSense:

As can any other VLAN provided it's next hope (i.e. 10.0.x.1) is defined in this manner. Now I know this is the default route, so I know that I cannot have one default route per VLAN at least not as defined above.

Do I need to setup BGP? Or is the answer here in that the firewall needs a route back to my clients?

There is also this post which states needing an extra VLAN that takes care of routing between the switch and router, however I can't seem to make that work either.

NOTE: It will just hang like that, there is no response of "Destination Unreachable" or anything at all in fact. 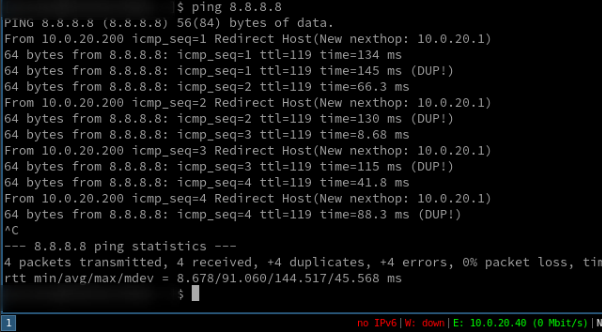 Those DUP packets are another sign that the seemingly double VLAN interface is just not correct.

If you use the OPNsense for inter-VLAN routing, you set up firewall rules for which connections are permitted. Note that the OPNsense is stateful by default, meaning that connections across it consume internal resources.

Using the L3 switch as client-side default gateway has the advantage of (likely) higher-speed internal routing, but you'll need ACLs to permit the wanted and deny unwanted traffic. ACLs are generally stateless and require definition for both directions. Stateless also means that the switch doesn't care how many connections run across it, in contrast to the OPNsense.

Also, the L3 switch sends all traffic to the same gateway, regardless of source VLAN - make sure you define your firewall rules with that in mind. Make also sure the OPNsense accepts traffic from directly connected subnets from a different VLAN, that's likely not default. Alternatively - and recommended -, you can remove the trunk from the OPNsense-switch link and use an access port with a single VLAN (and remove the VLANs from the firewall interface).

In order to route out of different interfaces, depending on source IP address/subnet you'll need to set up policy-based routing (PBR).

Not the answer you're looking for? Browse other questions tagged routing switch private-vlan l3vpn or ask your own question.